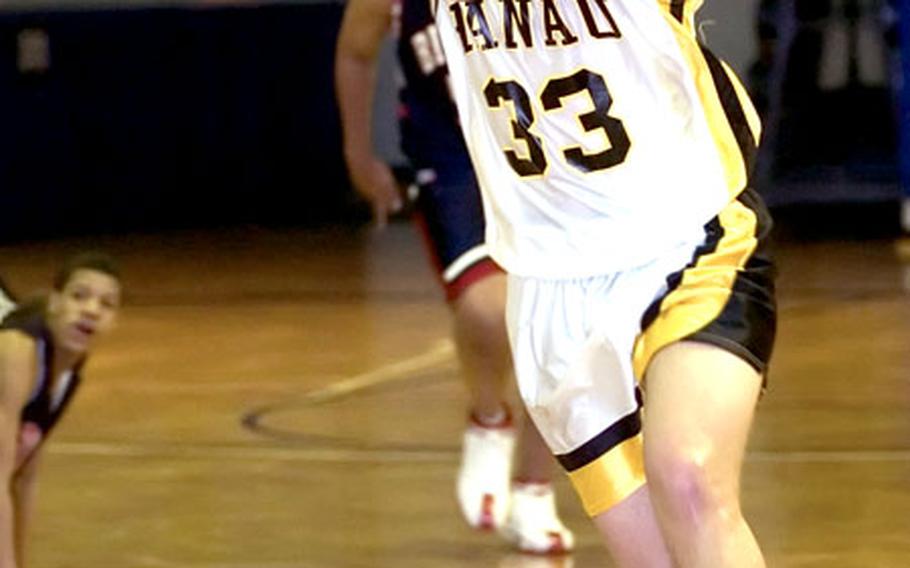 Hanau senior Marcus Fontanez, who averaged 13 points and 12 rebounds a game this season, was one of three repeat selections to the All-Europe first team. (Raymond T. Conway / S&S)

The three, selected by a panel of high school coaches, are the only repeat selections from the 2004 first team.

Even though he&#8217;s been there before, Bailey, a senior, was pleased with his latest selection.

All-around is also the word to describe Aviano&#8217;s Miller, a junior who averaged 25.1 points and 3.6 steals per game for a team that won every game except the last one. Always known as a scorer, Miller said he broadened his game this season.

The move paid dividends, according to Aviano coach Ken McNeely.

Fontanez, a senior who was traveling in the States and unavailable for comment, concluded his final DODDS season with something that eluded the other two: a European crown. Aviano dropped the Division II title game to Hanau, and Rota downed Ansbach in the Division III championship game.

Although Miller is just a junior, he has elected to live with his grandparents in Marshall, Mich., for his senior season to improve his status and visibility with college recruiters.

Bailey, too, will be taking his game to the States. He appreciates how fortunate Fontanez, who played on consecutive European championship teams, must feel.

Other players with All-Europe experience chosen for the 2005 team were 6-foot-6 senior Mark Pearyer of Naples, who moved up to the first team from the 2004 second team, and 5-10 senior Neal Griffin of Patch, who made the second team for the second straight season. The remaining 15 on the two teams were on first-time choices.

Of the 20 All-Europeans, 11 are seniors and seven juniors. Hanau guard Jeremy Marshall, who&#8217;s transferring to Kaiserslautern next season, and London Central forward David Marbury, both picked for the second team, were the only sophomores on the 2005 squad. No freshmen made the team.