Bahrain looks for creative ways for athletes to beat the heat 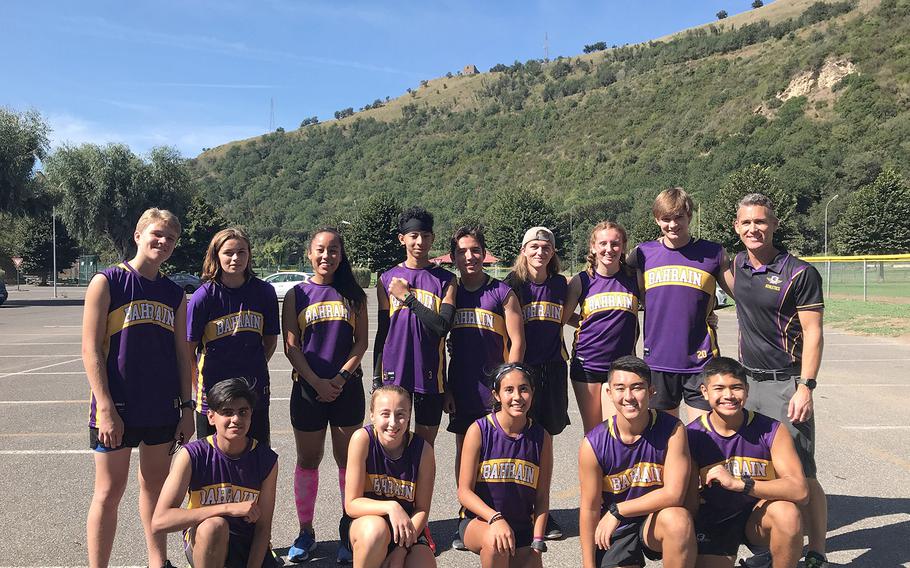 The Bahrain cross country team poses for a photo after competing in Naples, Italy on Sept. 21, 2019. The team qualified 11 runners for the European Championships in Germany on October 19. (Courtesy of Josh Dinkler/The Bahrain School)

The Bahrain cross country team poses for a photo after competing in Naples, Italy on Sept. 21, 2019. The team qualified 11 runners for the European Championships in Germany on October 19. (Courtesy of Josh Dinkler/The Bahrain School) 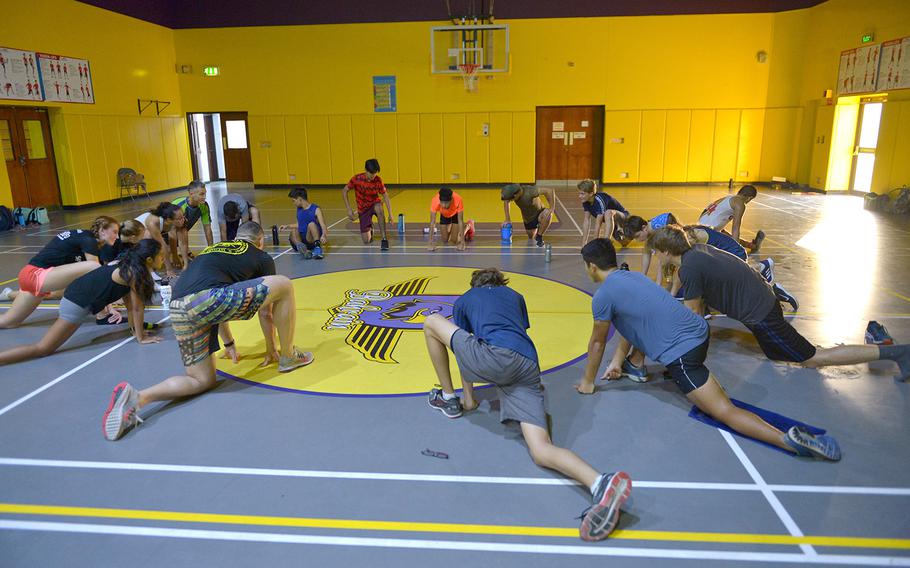 Athletes conduct stretching exercises in Bahrain on Thursday, Oct. 3, 2019. The team trains early in the morning inside the school's hallways to avoid heat-related injuries. (Joshua Karsten/Stars and Stripes) 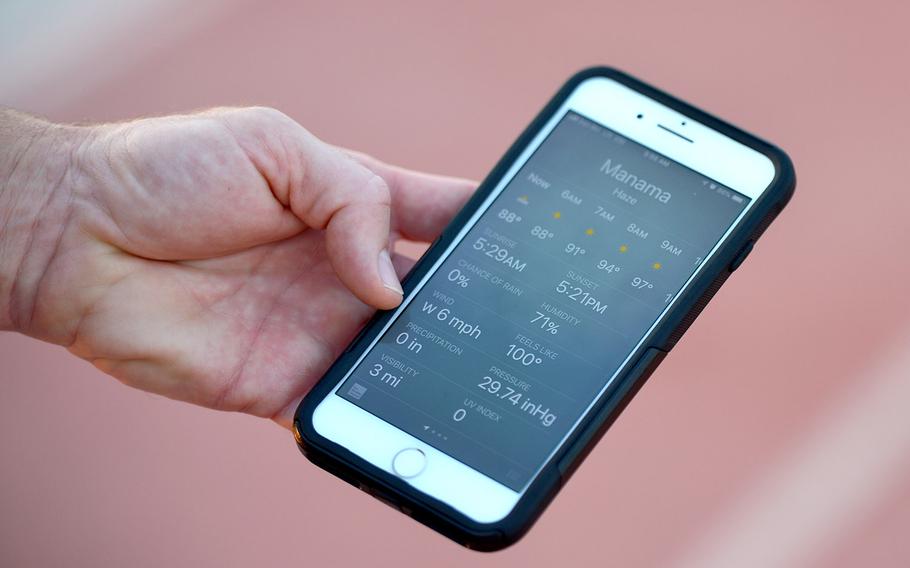 Coach Josh Dinkler checks the temperature in Bahrain on Thursday, Oct. 3, 2019.. The team trains early in the mornings in the school hallways to avoid heat-related injuries. (Joshua Karsten/Stars and Stripes) 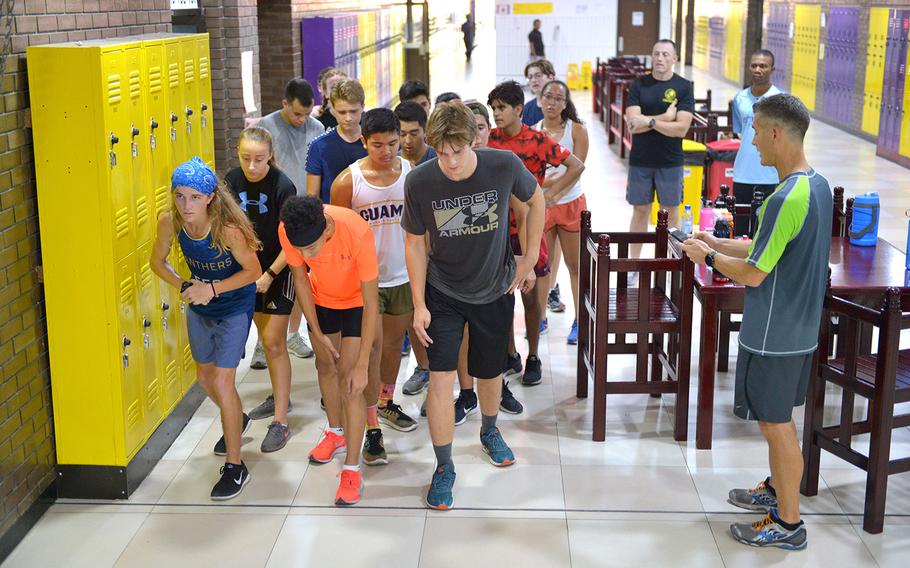 Coach Josh Dinkler gets set to start his stopwatch as members of the Bahrain cross country get set for a run around the school's hallways on Thursday, Oct. 3, 2019. The team trains before school starts to avoid heat-related injuries. (Joshua Karsten/Stars and Stripes) 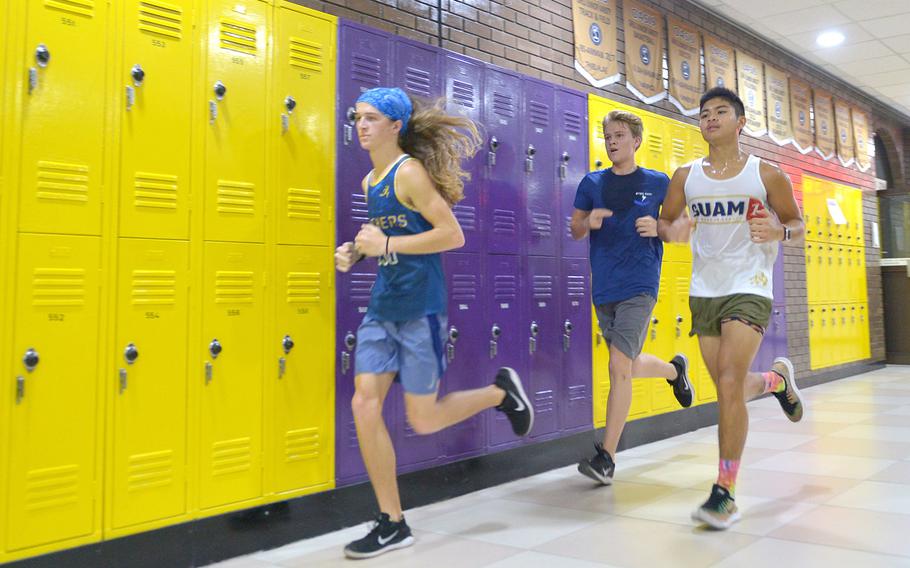 Athletes run laps around the hallways of the DODEA-Europe school in Bahrain on Thursday, Oct. 3, 2019. The team trains before school in the hallways to avoid heat-related injuries. (Joshua Karsten/Stars and Stripes) 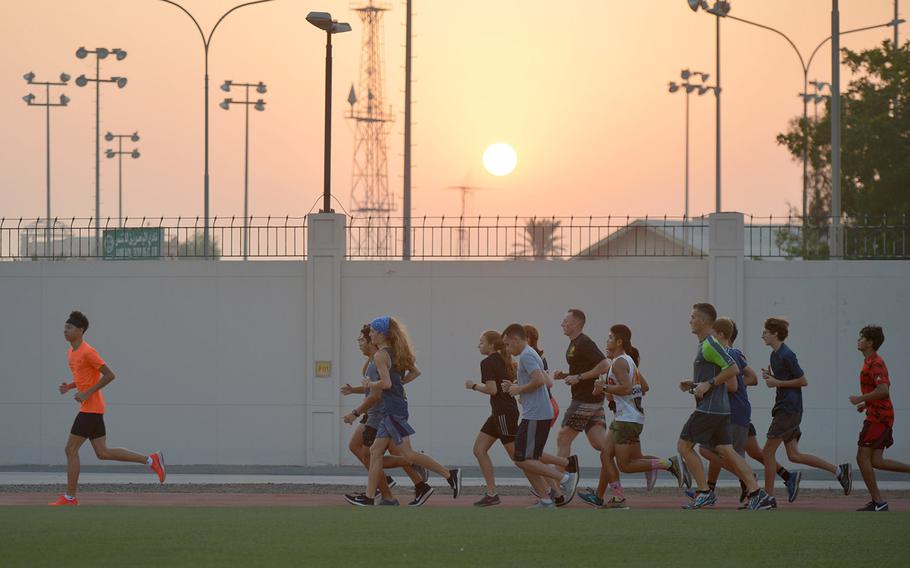 Cross country athletes run a warm-up lap around the track in Bahrain on Thursday, Oct. 3, 2019. (Joshua Karsten/Stars and Stripes)

MANAMA, Bahrain – Running in the hallways at DODEA-Europe schools is generally frowned upon. Offenders will often get a warning or two and then start receiving various disciplinary measures.

Of course, there are exceptions to almost every rule.

The Department of Defense Education Activity school in Bahrain could be the only institution in that Middle Eastern country that’s even nominally considered to be a part of Europe. The nearest DODEA school is 1,400 miles away in Turkey. The Bahrain cross country teams’ sole competition during the regular season this fall was in Naples – about 2,370 miles away. The season-ending championships in Baumholder, Germany? A leisurely jaunt of more than 3,000 miles.

And while the system goes to great lengths to get students at such an isolated post a feel of the kind of sports competition they’d be getting in the States, the school itself has to take some unusual approaches to get its athletes prepared for such contests.

It gets hot in Bahrain. Thursday’s high was 103 with a high level of humidity. It was 88 just before 6 a.m.

So every weekday morning, before the janitors show up to clean the floors, the boys and girls teams dash through the school hallways to avoid heat-related injuries, keeping the school in line with a U.S. military ‘black flag’ protocol not to exercise in temps higher than 90 degrees.

“I know it’s not ideal, but it’s the best that we can do because we can push ourselves faster inside the cold than in the heat,” said junior Emily Rice, the top girls runner.

Not that there aren’t occasional issues.

“Just this morning, there was this guy coming out of another hallway with his mop and bucket, and he nicked my leg as I was running past,” senior Tucker Pullen said.

Coach Josh Dinkler initially ran his team around the track until about 6 a.m. when he pulled out his smartphone weather app to check the temperature. “We always have to retreat indoors,” he said.

“We definitely pay attention to the weather,” Dinkler said. “Their safety is my first-and-foremost concern. When it’s black flag, we can’t train.”

The team can’t always avoid running when it’s hot, though. And those practices can be particularly grueling.

“Sometimes in practices, I find it little difficult to breathe,” said sophomore Alex Blakely, who posted the best boys’ time at the event in Naples. “When I go up to the other meets, it’s much easier and much cooler so I can run at full capacity.”

Dinkler said he isn’t sure if training in the early morning heat gives his runners a physical edge, but he believes the heat does push the runners’ “mental callus.”

Not many in Europe would lump the words “Naples” and “colder” in the same sentence. But it was considerably cooler at the meet in southern Italy than in Bahrain, team members said.

Both the boys and girls teams took first in the event and qualified for the finals in Baumholder on Oct. 19. And their competition consisted of many of the same Division II schools they’re going to be facing at the championships, giving each team a solid shot at winning the title. Many team members shaved times off their personal bests.

But both of those times are well off the pace of those expected to contend for individual titles such as Kaiserslautern’s Griffen Parsells, who clocked in at 17:00 at his home course on Sept. 14 or Stuttgart’s Mckinley Fielding (18:33 on the same course that day).

And about half the team won’t even make the trip to Baumholder as they’ve failed to meet qualifying standards.

Still, they continue to train five days a week before school, sometimes take to the pool for cardiovascular work in the afternoons and work out in other areas as well. The team runs once a week to practice “hills” up and down the steep bridge connecting Naval Support Activity’s two bases.

Dinkler said some of the motivation is to train for other sports or to achieve personal goals.

But whatever the motivation might be, the sport appears to be catching on at Bahrain. The roster has doubled in size from nine runners a year ago to 18 this season.

“They’re pushing themselves hard and doing something that seems incredibly tough,” Dinkler said. “They’re proud of it and I’m proud for them.”