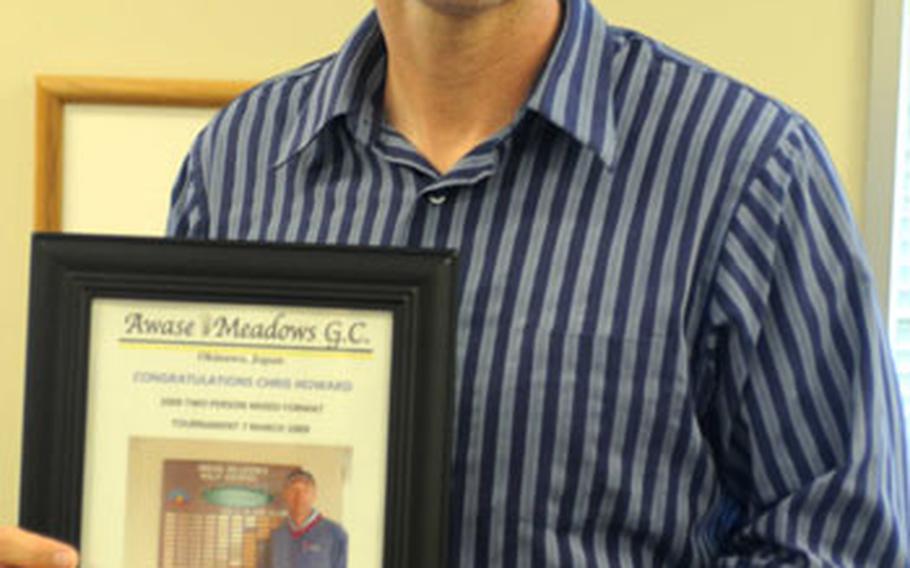 Chris Howard displays a photograph given to him by Awase Meadows Golf Course officials after Howard scored a rare two holes in one during the same golf round on Saturday. (Dave Ornauer/S&S)

So, imagine the hubbub surrounding Camp Foster civilian Chris Howard after he scored two aces in the same round of a tournament Saturday at Awase Meadows.

The 12th hole rests on a narrow 35- to 40-foot green, shielded by two sand traps on the left side and one on the right. The 9th features a sand trap in front and one to the left, guarding a slim 70-foot-long-by-20-foot-wide diagonal green.

Making the feat much more difficult were the conditions; on-and-off rain showers and high winds with temperatures in the mid- to upper-50s.

"Horrible weather," Howard said. "One hole, the wind would be in your face; the next, it would be downwind from you."

Howard, 42, is a retired Air Force senior master sergeant now working as site transition officer in charge with Foster&#8217;s Navy/Marine Corps intranet branch. He&#8217;s been playing golf since he was 19, and had scored two aces prior to Saturday&#8217;s feat.

Golf Digest in 2000 commissioned Francis Scheid, a retired Boston University math department chairman, to calculate the odds of two holes in one.

The odds of two aces in the same tournament round are 1 in 67 million, but that&#8217;s for two par-3 holes; the research didn&#8217;t cover a par-3 and a par-4 in the same round, and extensive Internet research shows the odds of that combination are as yet undefined.

"Some of the guys told me it could be a Guinness world record," said Howard. "To be the only guy in the world to have that, that would be something."

Whether it is or is not a record, Howard is a golfer worthy of holding the honor, Baker said. "He&#8217;s a real honorable champion. A good guy."