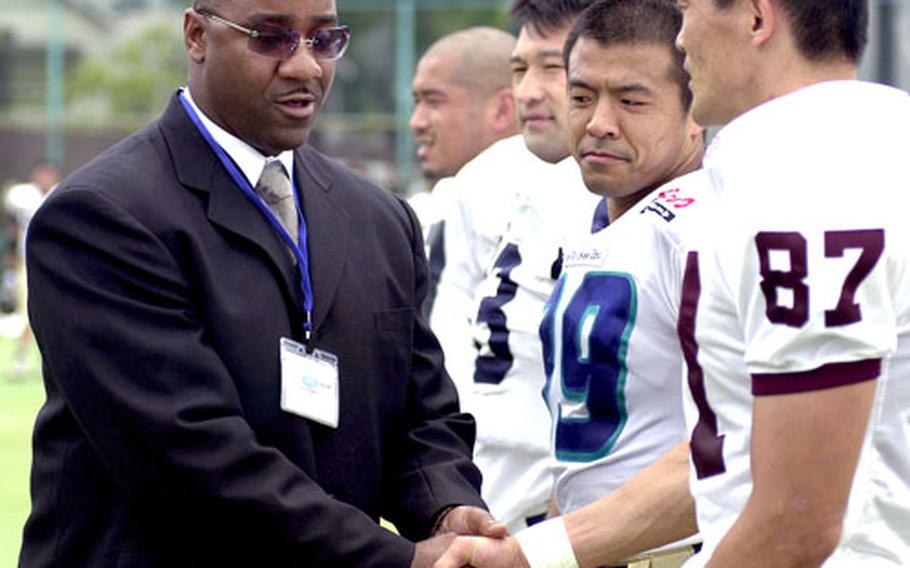 Joe Howell, exiting Japan after eight years at Yokota Air Base, will be remembered many ways by those involved with high school and interservice football:

But he also likely will be remembered for something else after Saturday&#8217;s Yokota&#8217;s Warriors homecoming halftime: the Joe Howell Award for the best defensive lineman in the league.

Howell&#8217;s years at Yokota arguably represented the best and worst of times, starting with the 1999 season&#8217;s first game: He suffered a torn Achilles&#8217; tendon and missed the rest of the campaign.

But noting that the base didn&#8217;t support the team, and that players had to pay $300 to suit up, Howell got 374th Airlift Wing commander Col. Mark Zamzow to agree to a proposal that helped all of Yokota&#8217;s varsity sports teams regain funding cut off since the early 1990s.

He chaired meetings in winter 2000 that helped organize USFJ league remnants into the USFJ-AFL and spearheaded a commissioner search that netted Tim Buck, a lawyer at Atsugi Naval Air Facility.

&#8220;He clearly believed that the league was more important than any one team,&#8221; Buck, now a film producer in Germany, said.

The Raiders reached the USFJ-AFL&#8217;s first league title game in 2000, losing 12-6 to Yokosuka. Yokota won only one game the next two seasons and disbanded in August 2002 under the weight of supporting Operation Enduring Freedom.

Yokota returned in 2003 but Howell faced a greater challenge: Buck, transferring to Germany, asked him to be commissioner.

Howell presided over a league that expanded to a record seven teams but which deployments again plunged into disarray. Even the league&#8217;s championship game was canceled.

That was perhaps the biggest reason the league decided to name an award for Howell, said Rhodus and Dowdell, who proposed the idea. Said Dowdell: &#8220;Looking at the guys who have the chance to play football because of his effort to keep the league going, that inspired me to help keep it going for them, too.&#8221;

Howell credits football with helping mold him as a senior NCO. Being league commissioner helped hone his leadership and managerial skills, he said. &#8220;At the high school, mentoring young folks &#8230; made me more effective mentoring young people in the Air Force. The Air Force will gain and benefit from that.&#8221;