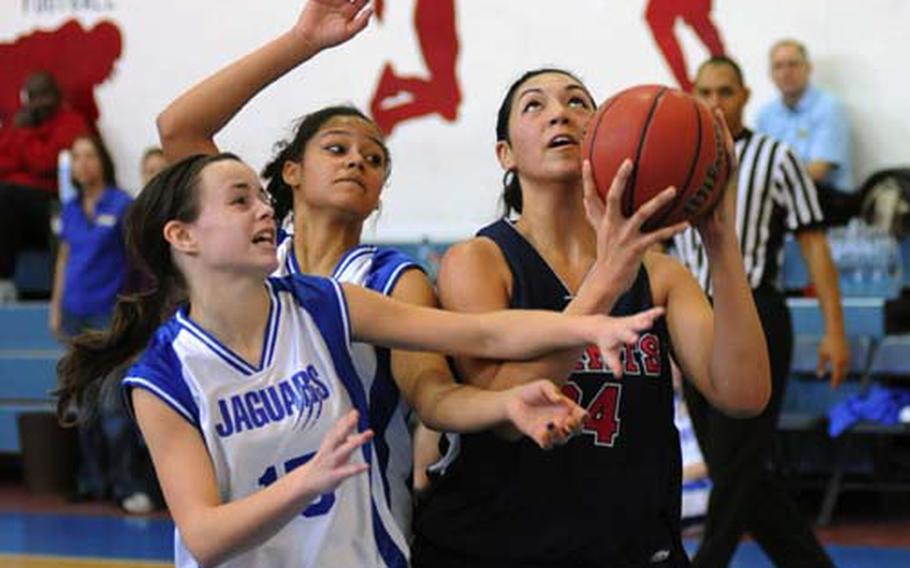 Sigonella&#39;s Andrienn Moore, left, and Mekayla Valentine try to keep Aviano&#39;s Jasmine Mailoto from getting of a shot in a game in Aviano on Saturday. Aviano won 55-13. (Michael Abrams / S&S)

Sigonella&#39;s Andrienn Moore, left, and Mekayla Valentine try to keep Aviano&#39;s Jasmine Mailoto from getting of a shot in a game in Aviano on Saturday. Aviano won 55-13. (Michael Abrams / S&S) 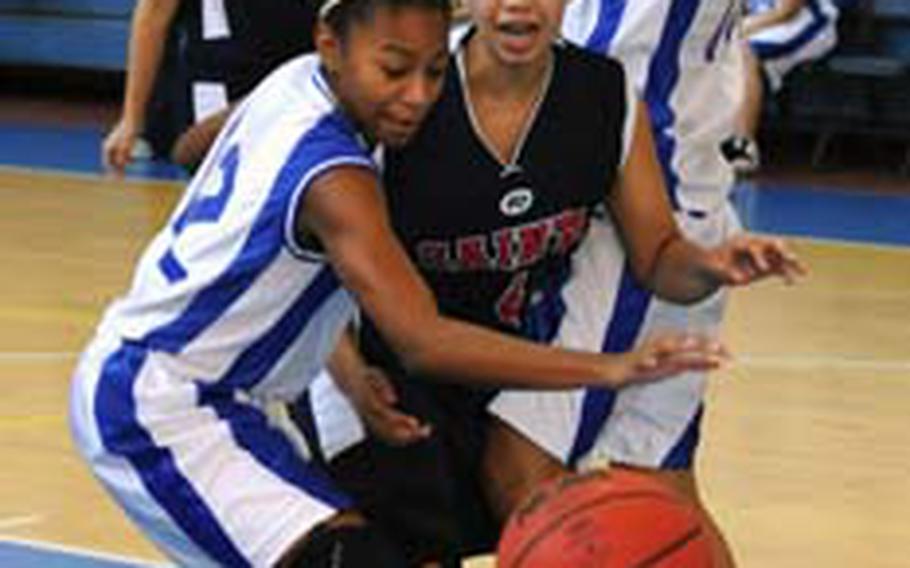 Aviano&#39;s Emily Cartwright, center, loses her dribble as she gets caught between Sigonella&#39;s Elexa McCracken, left, and Mekayla Valentine in a game that Aviano won 55-13, Saturday. (Michael Abrams / S&S)

On Saturday, Jasmine Mailoto scored 22 points, and Annamarie McClelland, on the strength of three consecutive three-pointers in the fourth quarter, added 15 to lift the Lady Saints to 6-0 overall and in Region IV. Aviano travels to Naples next weekend for a showdown with its traditional rival.

Sigonella fell to 3-5 overall and in regional play.

The sweep left Aviano the only school with girls and boys teams unbeaten in regional play.

Ramstein 52, Baumholder 13: Friday at Ramstein, Mackenzie Crews scored 14 points and pulled down 10 rebounds as the Lady Royals of Division I hammered the 2009 Division III champions.

Baumholder, which will compete in Division II in this season&#8217;s Europeans, fell to 0-8 overall. The Lady Bucs trailed 30-8 at halftime as Ramstein improved to 4-2 overall and 2-1 in Region II.

Wiesbaden 45, Mannheim 34: Saturday at Wiesbaden, the Thomas sisters fueled a Region II sweep Saturday by scoring 14 points each. The production brought LeAndra&#8217;s weekend total to 28 points and LeAmber&#8217;s to 26.

Ashley Smith, who grabbed nine rebounds in Wiesbaden&#8217;s 37-33 victory Friday night in Mannheim, led Wiesbaden in rebounding Saturday with 12. LeAmber Thomas added 11 rebounds Saturday to the 10 she grabbed on Friday.

Black Forest Academy 50, Bitburg 22: Saturday at Kandern, Germany, Jessica Krause scored a game-high 14 points and stole the ball nine times as BFA completed a sweep of its inter-regional guests and evened its record at 3-3.