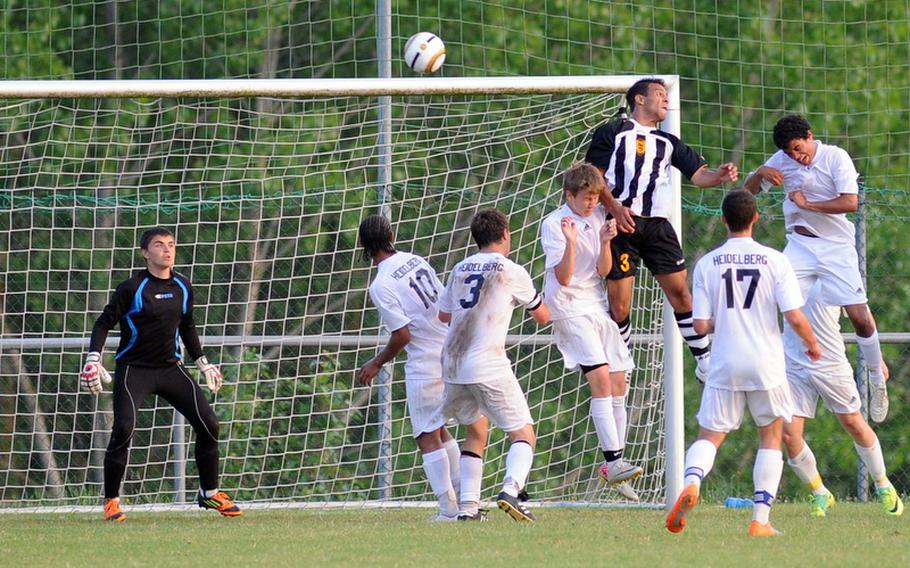 Patch's Xavier Thomas, sails higher than the Heidelberg defense to score the game-winning 2-1 with time running out in a Division I semifinal at the DODDS-Europe soccer championships. Patch will face ISB in Saturday's title game, while Heidelberg will take on Vilseck for third place. (Michael Abrams/Stars and Stripes)

Patch's Xavier Thomas, sails higher than the Heidelberg defense to score the game-winning 2-1 with time running out in a Division I semifinal at the DODDS-Europe soccer championships. Patch will face ISB in Saturday's title game, while Heidelberg will take on Vilseck for third place. (Michael Abrams/Stars and Stripes) 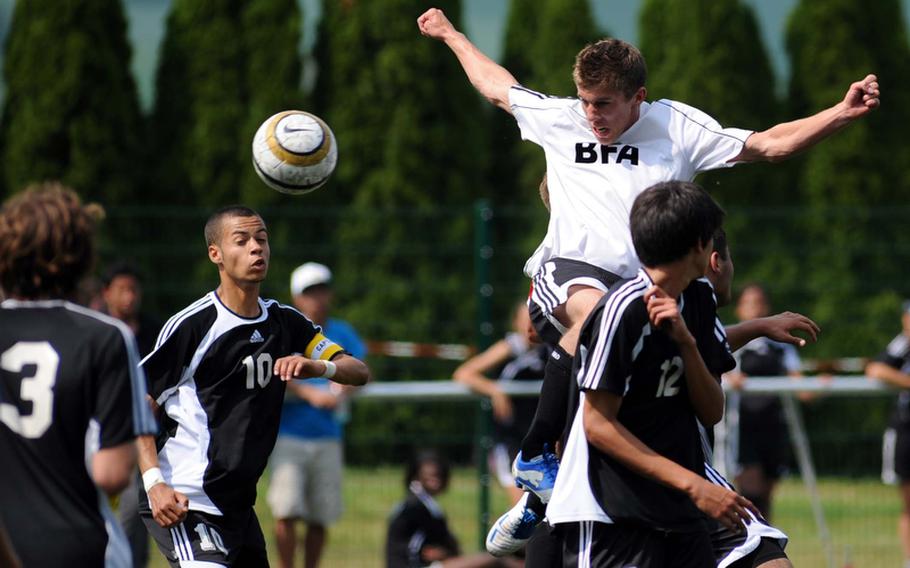 Black Forest Academy's Austin Troxell rises above the Vicenza defense to knock in a goal in BFA's 4-2 win over Vicenza in a Division II semifinal at the DODDS-Europe soccer championships. (Michael Abrams/Stars and Stripes) 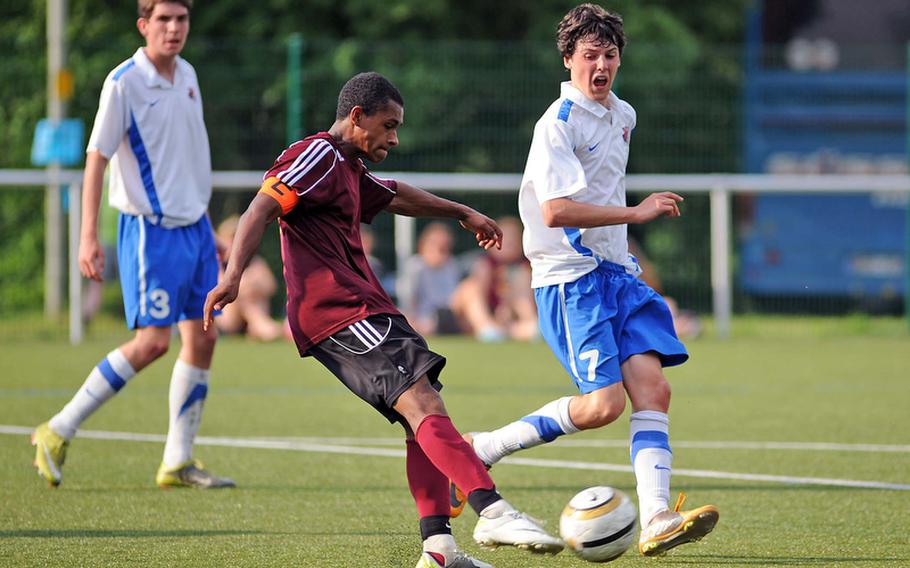 Vilseck's Tyler Lewis clears the ball in front of ISB's Alessandro Pryce in a Division I semifinal at the DODDS-Europe soccer championships. At left is Christian Faaborg. (Michael Abrams/Stars and Stripes) 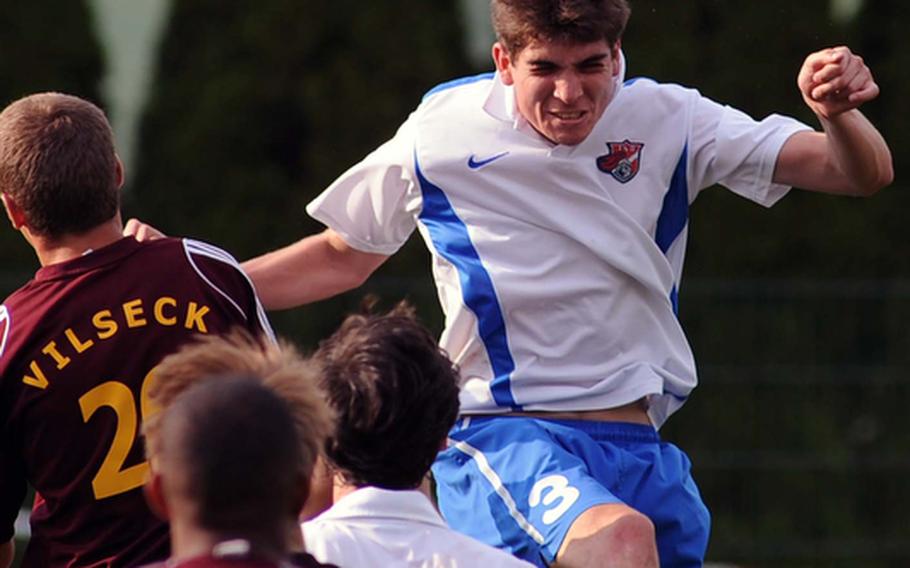 ISB's Christian Faaborg gets a header over the Vilseck defense in a Division I semifinal at the DODDS-Europe soccer championships. (Michael Abrams/Stars and Stripes) 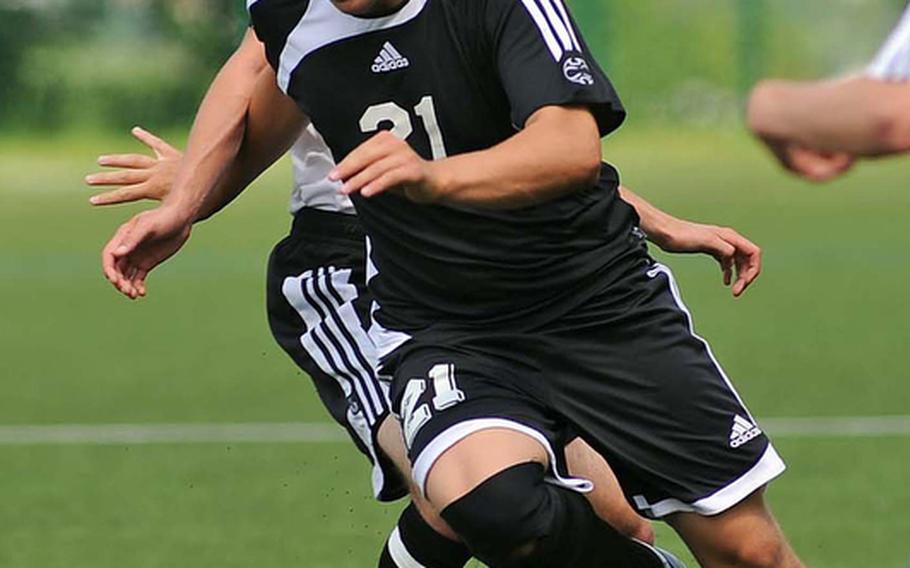 Two new soccer champions will be crowned Thursday when the boys&rsquo; Divisions I, II and II championship games unfold at Ramstein High School.

Marymount International School of Rome will get a chance to defend its D-II crown at 3 p.m. Thursday after turning back crosstown rival American Overseas School of Rome 3-2 in overtime in a Wednesday semifinal.

But Ramstein&rsquo;s boys, the 2011 D-I kings, fell out of the 2012 race Wednesday after a 1-1 tie against top-seeded International School of Brussels. The outcome left the Royals 1-1-1 in pool-play and short of the numbers needed to edge Heidelberg for second place in the pool and a berth in Wednesday&rsquo;s semifinals.

And defending D-III champ Sigonella was eliminated from the title race on Day 3 of this four-day event in a 2-0 semifinal loss to Rota.

Rota and surprising International School of Florence, which battered Brussels 6-0 in the other boys&rsquo; semi, will meet at 11:45 a.m. to settle the small schools title.

Awaiting Marymount, seeded second to Hohenfels this year, in the D-II title game scheduled to begin at 3 p.m. will be sixth-seeded Black Forest Academy, the only D-II team from outside of Italy to make the Final Four.

BFA downed Vicenza, 4-2 in a semifinal that saw the Falcons rally from an early 1-0 hole dug by a stunning Taylor Curry strike inside the far post off a free kick awarded in the game&rsquo;s second minute.

Renaldo Reyter added the second goal for Vicenza at game&rsquo;s end. The two Vicenza strikes were the only goals BFA, which went 3-2-2 during the season, has surrendered so far in this event.

The victory advanced the sixth-seeded Panthers into Thursday&rsquo;s D-I championship game at Ramstein High School, but it required some last-moments heroics from Patch keeper Zach Runnels to preserve it. Runnels made headlong point-blank consecutive diving saves against two onrushing Heidelberg attackers to ice the game.

Rauschenplat scored a first-half goal for Patch, which will playing its first D-I title game in school history, according to coach Bill Ratcliff. The Panthers will take on top-seeded and unbeaten International School of Brussels at 6:45 p.m. Thursday. ISB blanked Vilseck4-0 in Wednesday&rsquo;s other semifinal.

Preston Harrison gave Heidelberg an early 1-0 lead in the contest.