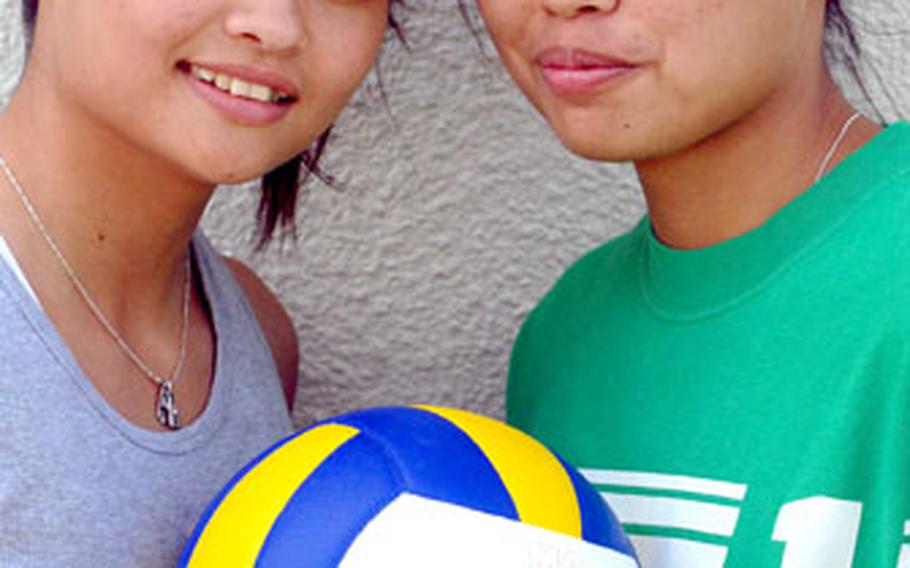 The 5-foot Tajalle twins, setter Raelene and outside hitter Raeanne, are two reasons why the Kubasaki volleyball team has been competitive. (Dave Ornauer / S&S)

CAMP FOSTER, Okinawa &#8212; Transfers and graduations are a way of life for Department of Defense Dependents Schools-Pacific student-athletes, coaches and sports teams. Still, losing do-everything senior middle blocker Alex Fernandez, with nobody to step into her shoes, had to have left Kubasaki&#8217;s girls volleyball team feeling as if it had been piano-wired.

How odd, then, that a pair of 5-foot junior twins, setter Raelene Tajalle and outside hitter Raeanne Tajalle, have been key cogs in keeping the Dragons on a winning keel in a game in which height usually rules.

Raelene has averaged 33 set assists, while Raeanne has racked up an average of 9.5 spike kills. Between them, and new middle blockers Sarah Brubaker and Chloe Freeman, the Dragons are unbeaten in four Okinawa Activities Council matches and have run their regular-season winning streak against arch-rival Kadena to 10 straight matches since 2004.

It&#8217;s a markedly different squad, Kelly says, than the one that took the court a year ago with Fernandez, at 5-foot-9, averaging 13 kills and seven blocks to pace the Dragons to their third Far East Class AA tournament Final Four finish in school history.

&#8220;This year, our strength is we&#8217;re a tight-knit team. Communication goes a long way in covering the court, and it makes up for not having the kind of power play and blocking up at the net,&#8221; Kelly said.

It&#8217;s not that Kubasaki has had no strong play at the net; Brubaker and Freeman have ably handled their duties, combining for an average of 15 kills and 5 blocks per match.

That &#8220;stuff&#8221; has mainly meant a feather-light touch on the ball in setting Brubaker, Freeman and Raeanne.

Kadena coach Hoa Nguyen said he was impressed with the chemistry that the Tajalle twins bring to the table.

So how do two 5-footers play so much taller than they are?

For one, they each insist, height is not an issue.

The Tajalles were born in Dededo village on Guam, where volleyball is something of a culture. Guam&#8217;s middle- and high-school leagues are highly competitive &#8212; teams there have won 13 Class AA tournament titles and two Class A crowns.

The twins cut their teeth playing at Vicente Benavente Middle School in Hagatna in the sixth and seventh grade, before moving to San Marcos, Calif., then to Kubasaki as freshmen.

Also helping in their development was good coaching, the twins said. They learned much of their craft from learned coaching presences on Guam such as Al Garrido, a two-time Far East coaching champion now an assistant at Nile C. Kinnick in Japan.

Coaches such as Kelly, and Terry Chumley before him, have only furthered their development. And despite being in something of a building phase, the Tajalles feel a return to the top eight, maybe higher, at Class AA is well within reach.