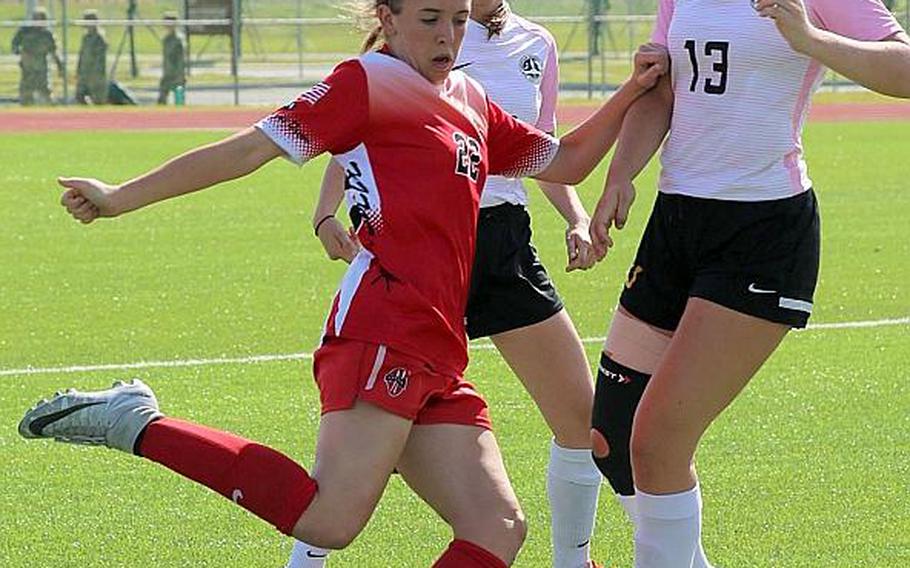 CAMP HUMPHREYS, South Korea – A year ago, Nile C. Kinnick broke out of the gate early for two goals en route to a 3-0 shutout of American School In Japan for its first Far East Division I girls soccer tournament title.

The Mustangs couldn’t have helped but remember – and it seemed to fuel their fire Wednesday as they took on the Red Devils and beat them at last year’s game, scoring three times right out of the chute, then holding off a second-half rally to down Kinnick 5-3.

“We came out flat” after playing two earlier matches Wednesday, Red Devils coach Nico Hindie said. “They got two quick goals, we couldn’t connect on any passes and you can’t do that against a team like ASIJ. They have those quick scorers up front.”

One of them, Ava Vander Louw, a freshman transfer with club experience out of Minnesota, scored twice in the early stages of the first half after veteran Rikako Kent got the Mustangs on the board first.

Vander Louw continued her assault on Red Devils keeper Allie Vincent in the second half, scoring twice more, giving her 21 goals on the season, before Kinnick finally got its game in gear.

The Red Devils’ own freshman, Maggie Donnelly, found the back of the net twice, finishing her rookie season with 44 goals, and veteran midfielder Ella Eisenhardt got her 36th goal as Kinnick trimmed the deficit to two goals. But it was as close as the Red Devils would get.

“I’m proud of the girls,” Hindie said. “They came back and made it 5-3. But we were down by five. They’re deserving champions.”

It was the Red Devils’ fourth straight finals appearance, three of them losses. ASIJ returned to the top of the D-I heap for the first time since 2013 and got the fourth title in school history.