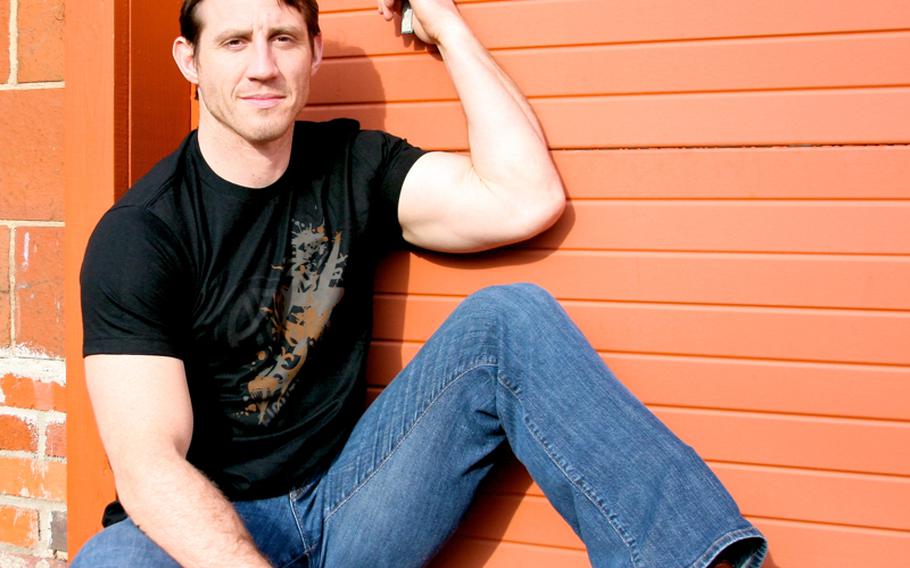 Tim Kennedy, an Army veteran and now a member of the Army National Guard, will be fighting Saturday in a Mixed Martial Arts bout against Melvin Manhoef. (Courtesy photo by Kelly Crigger)

Tim Kennedy, an Army veteran and now a member of the Army National Guard, will be fighting Saturday in a Mixed Martial Arts bout against Melvin Manhoef. (Courtesy photo by Kelly Crigger) 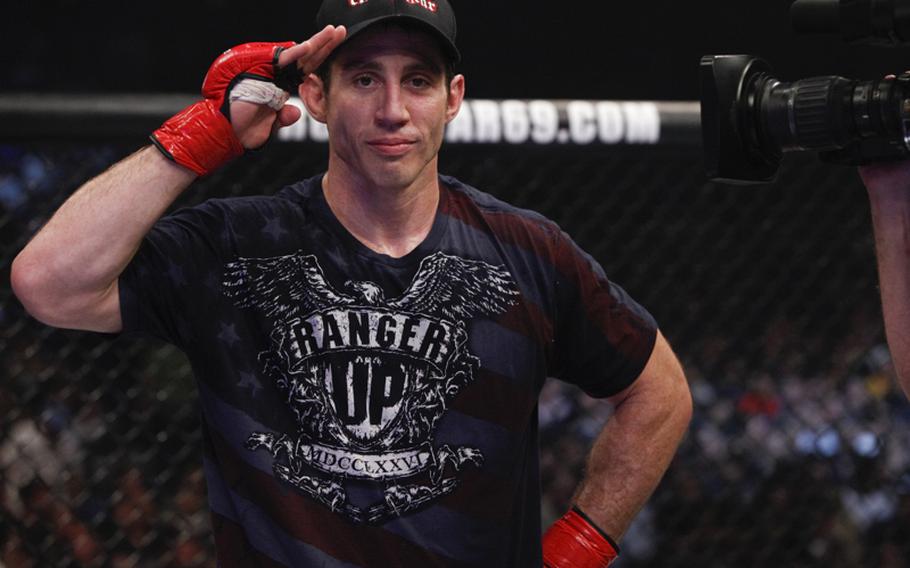 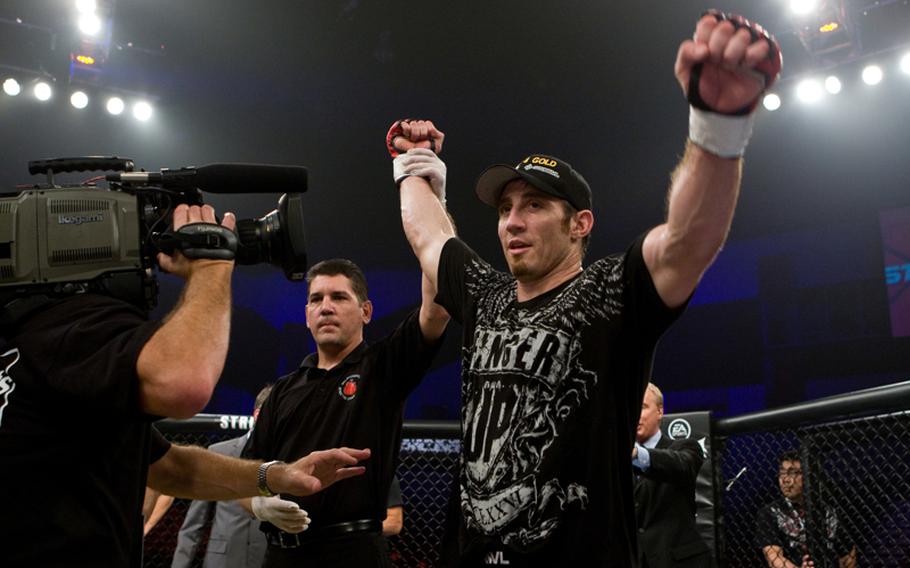 Tim Kennedy celebrates a victory over Zak Cummings in an earlier Mixed Martial Arts bout. He will be fighting Melvin Manhoef on Saturday. (Esther Lin/Strikeforce) 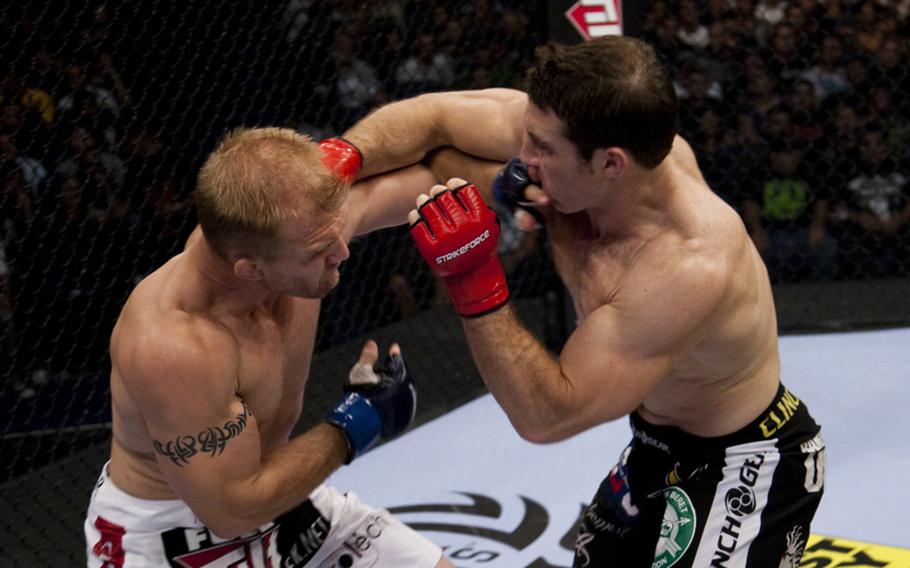 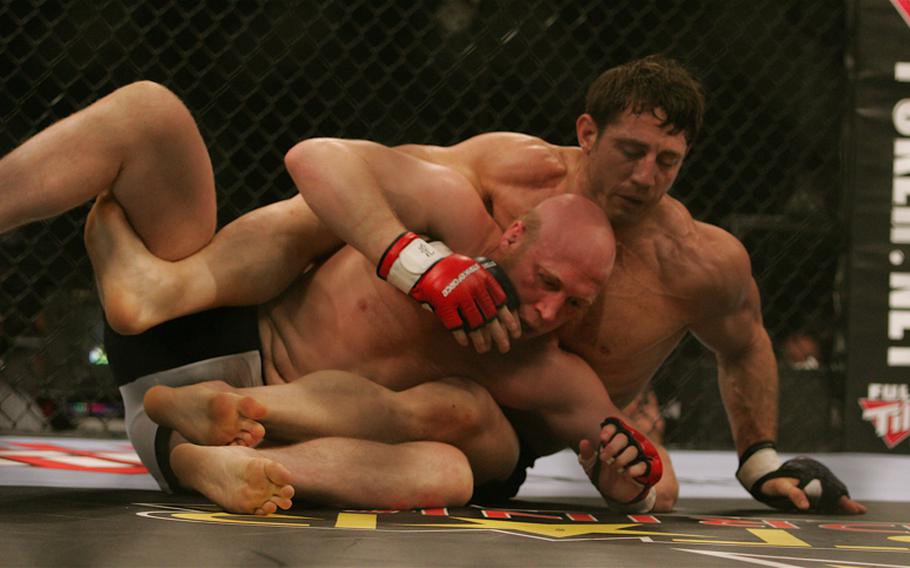 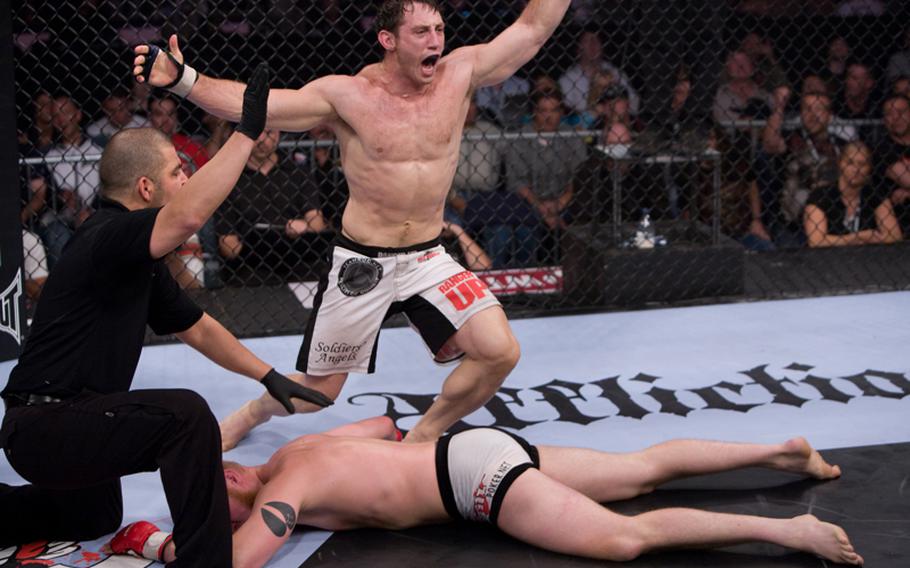 Iraq, 2006: Tim Kennedy, then a sniper with 7th Special Forces Group, entered a building. A woman, who he said was &ldquo;freaking out,&rdquo; immediately ran at him and grabbed at his rifle.

&ldquo;Had I not been as good or as proficient as I was with hand-to-hand combat, I probably would have had to kill people, because I didn&rsquo;t know what else to do,&rdquo; Kennedy said.

Instead of firing on the woman, Kennedy sidestepped and tripped her, a skill he learned in Army martial-arts training. He put flex-cuffs on her and realized, after looking around the room, she was just trying to protect her children

&ldquo;I see what&rsquo;s going on,&rdquo; Kennedy said, recalling what he said that day. &ldquo;It&rsquo;s not a big deal. Let me sit you by your kids. I want you to relax. Everything is going to be fine....&rdquo;

Kennedy said that if he did not have that &ldquo;situational awareness from training&rdquo; and the skills learned in modern combatives, the Army&rsquo;s hand-to-hand combat training, he does not know what the outcome of that situation would have been. &ldquo;And that situation has happened a few times in both Iraq and Afghanistan,&rdquo; he added.

The San Luis Obispo, Calif., native had a professional mixed-martial arts record of 6-0 when he joined the Green Berets in 2004. He now has a professional record of 12-3 with a middleweight bout against Dutch fighter Melvin Manhoef scheduled for Saturday. That fight will be in Columbus, Ohio, and on Showtime television.

Kennedy is excited about the match.

While Kennedy was in grade school, his father enrolled him in karate, jujitsu, wrestling and kickboxing to counteract things like the cooking class and piano lessons that his mother made him take. His father also took him shooting.

&ldquo;All the things I now love doing are the skills I need in the Army,&rdquo; said Kennedy, now a staff sergeant in the National Guard&rsquo;s 19th Special Forces Group. &ldquo;I still shoot two or three times a week. I still build my own guns. I still reload my own ammo. All the stuff I need to do as a weapons sergeant, I do recreationally.&rdquo;

Kennedy attended Columbia College of Missouri and earned a bachelor&rsquo;s degree in criminal justice. He was attending graduate school when he dropped out to join the military in response to Sept. 11, he said.

&ldquo;Originally I wanted to be a profiler for the FBI,&rdquo; Kennedy said. &ldquo;I wanted to be Jodie Foster from &lsquo;Silence of the Lambs.&rsquo; &rdquo;

The husband and father of two girls has since given up that dream and focuses entirely on the military and fighting.

The Army began its modern combatives program in 2005, a year after Kennedy joined. He won the first three servicewide tournaments, but hasn&rsquo;t participated since. He says no one outright told him to stop competing to give others a chance, but he now just trains fellow soldiers for the annual event.

Being both at the same time, however, is not a walk in the park. While on active and competing, he woke up at 4 a.m. to go the gym and do strength and conditioning training before going to the firing range. After the range, he returned to the gym to do technical workouts like sparring. Then he fulfilled whatever obligations his command laid out for him. And once again, he returned to the gym to do jujitsu, wrestling and boxing.

&ldquo;This made for 15 to 16 hours days, but that is what I had to do to stay relevant in MMA these days,&rdquo; said Kennedy, who left active duty in. 2008 and joined the reserves.

His fan base is mostly soldiers, he said, and they come from around the globe to see him fight.

&ldquo;Then, after the fights, it&rsquo;s like one big reunion &mdash; pretty special time,&rdquo; he said. &ldquo;Give me a couple more years of fighting then I&rsquo;ll be right back deploying with you guys.&rdquo;