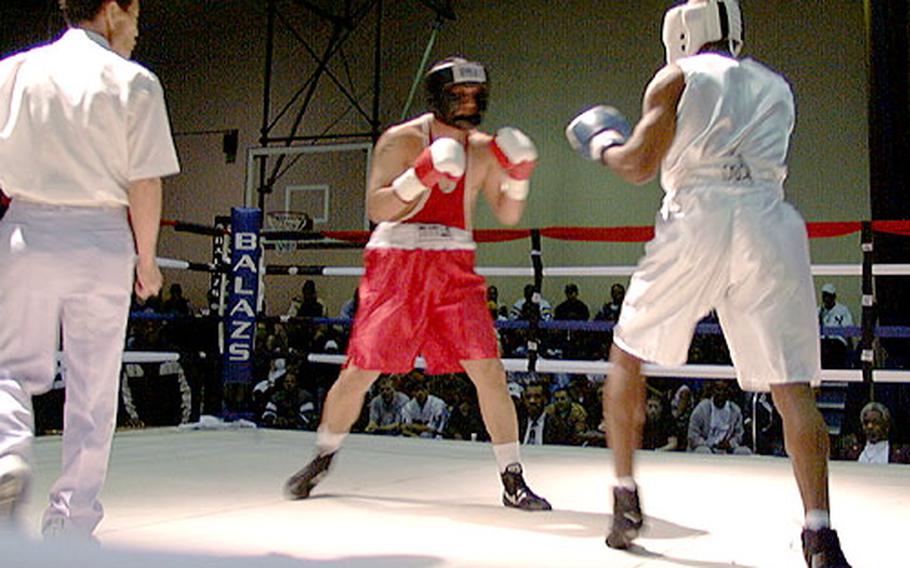 Army Staff Sgt. Johnny Dockery measures his opponent, Robert Flores, during the debut of the Army boxing program for lower South Korea in March at Camp Walker. The program has expanded to Camp Carroll, and Dockery is the post boxing team&#39;s new coach. (Franklin Fisher / S&S)

Last fall, the Army started the program in Taegu, senior headquarters for Area IV Army units. But if troops at other installations wanted to train, they had to trek all the way over to Camp Henry.

Camp Carroll, the sprawling logistics base in Waegwan, now has a coach, a boxer training room, fight gear and big plans for the future.

And the installation&#8217;s new boxing coach, Army Staff Sgt. Johnny Dockery, has a little greeting for the entire U.S. military in South Korea: We got your fight right here.

And having their own boxing team boosts the morale of troops there, added Balanon.

Dockery, a motor sergeant in the 168th Medical Battalion, is coaching four fighters, who train three times a week. A new gym is slated to open on Camp Carroll in October, and one of its rooms will include boxing equipment.

A typical training session runs from 6 p.m. to 8 p.m. Monday, Wednesday and Friday, and includes stretches, shadow boxing for three rounds and instruction in the various types of punches &#8212; such as combinations and counterpunching. There&#8217;s work on the speed and heavy bags, some weight training, neck exercises and jumping rope, added Dockery.

He wants to ensure the fighters know the fundamentals before they enter formal competition.

&#8220;I don&#8217;t want to put &#8217;em in there and they just get in there and just brawl and not worry about the techniques, the art of boxing. I want them to understand how and why and when to throw your power punches, how to set up your punches, when to counterpunch, how to use head movements, when to block, things of that nature,&#8221; Dockery said.

Sgt. Marlon Anthony, also a motor sergeant in Dockery&#8217;s battalion, saw a flier for the program recently and started training about three weeks ago.