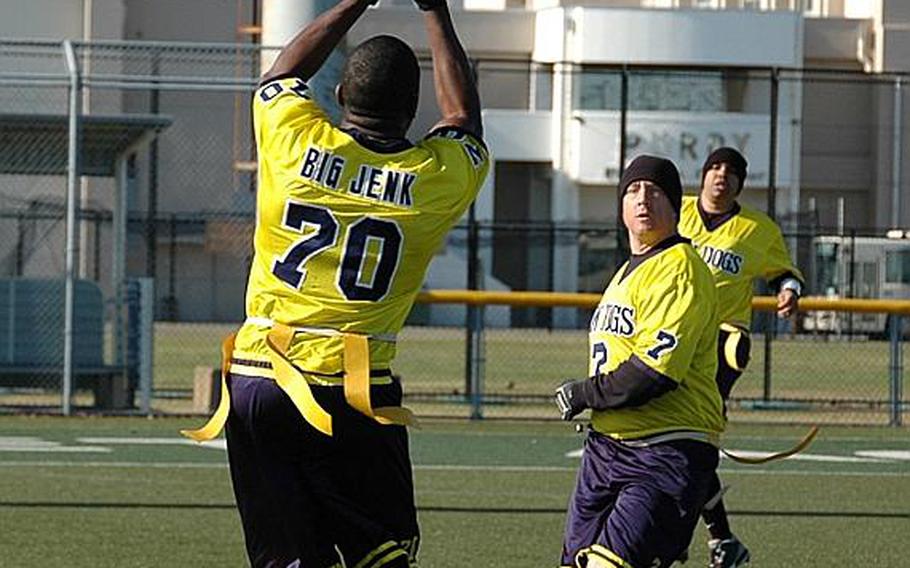 Navy receiver Lorenz Piper tries to haul in a pass during the Army's 26-19 win over the Navy on Saturday at Yokosuka Naval Base in the annual Army-Navy flag football game for mainland Japan. (Tim Wightman/Stars and Stripes)

Navy receiver Lorenz Piper tries to haul in a pass during the Army's 26-19 win over the Navy on Saturday at Yokosuka Naval Base in the annual Army-Navy flag football game for mainland Japan. (Tim Wightman/Stars and Stripes) 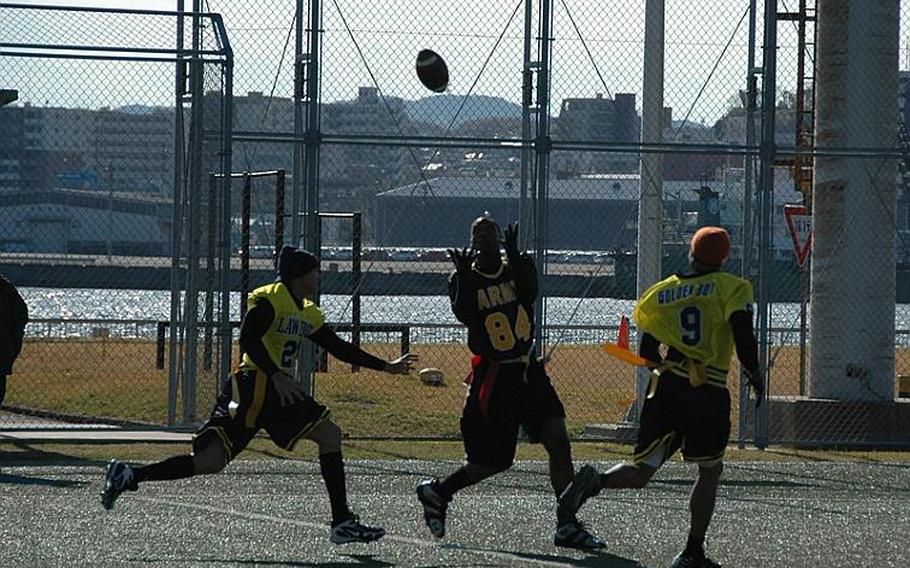 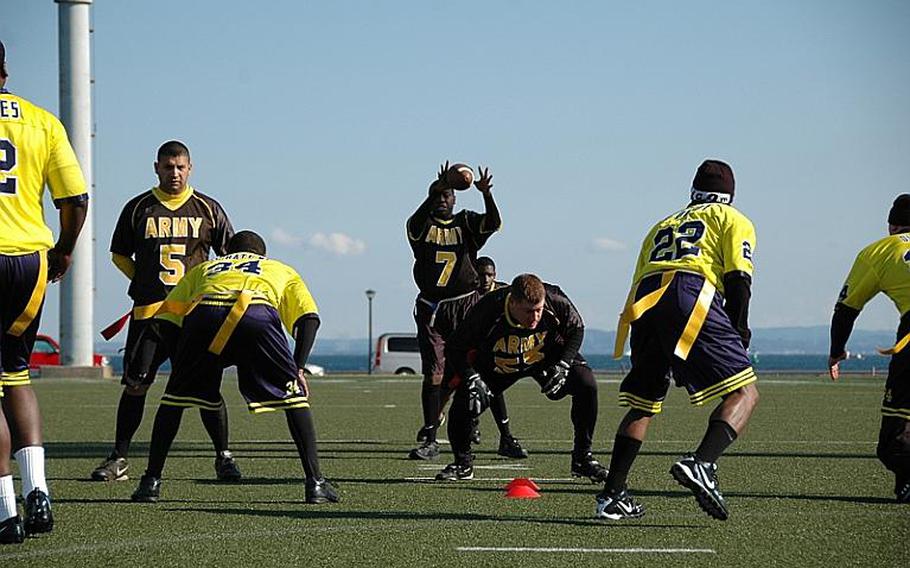 Abifarin Scott takes the snap deep in Navy territory during a 26-19 win over Navy on Saturday at Yokosuka Naval Base in the annual Army-Navy flag football game pitting soldiers against sailors stationed on mainland Japan. (Tim Wightman/Stars and Stripes) 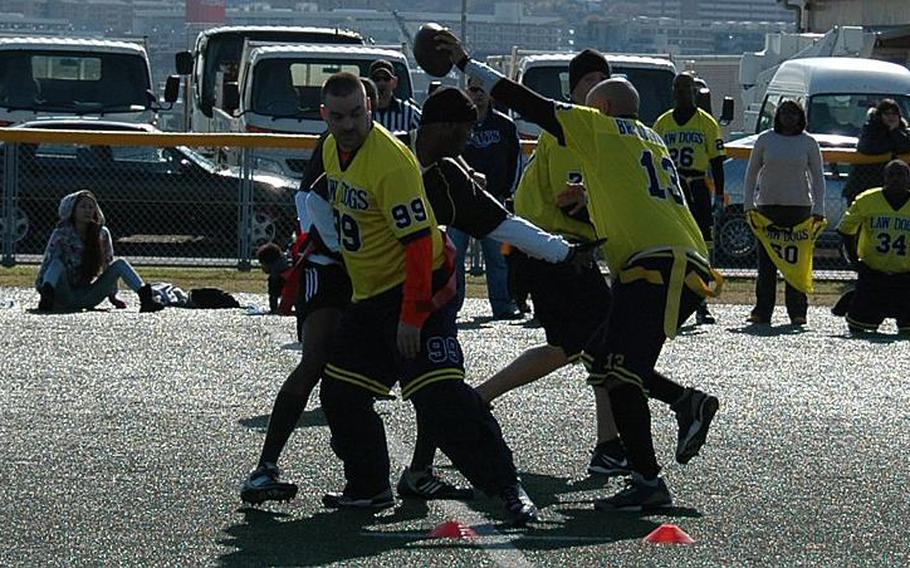 Navy quarterback Anthony Seaman tries to reach for a first down Saturday during his team's 26-19 loss to Army in the annual flag football game between soldiers and sailors stationed in mainland Japan, held at Yokosuka Naval Base. (Tim Wightman/Stars and Stripes)

Even with all the drops and miscues, Navy had the ball, down 19-13, and a chance to win with 1 minute, 24 seconds left in regulation - when the Army&rsquo;s Richmond Slan jumped a route, picked off Anthony Seaman&rsquo;s pass and didn&rsquo;t look back.

&ldquo;I was playing deep, and then I moved up and saw that they were going short, and it was just an overthrow,&rdquo; Slan said. &ldquo;I was there for the catch and I took it to the house.&rdquo;

The TD sealed it for Army, which reclaimed the trophy after two years of disappointing losses.

&ldquo;It&rsquo;s very important,&rdquo; said Army&rsquo;s Marlon Walker. &ldquo;The last two years, the Navy beat us. They beat us at home last year on Camp Zama. So we wanted to come up here and show some pride.&rdquo;

Army looked like the more disciplined team from the start - taking the opening snap and driving the length of the field for an early score. Jacobie Brydson&rsquo;s fourth-down catch-and-run was the highlight.

After a sloppy three-and-out by Navy, Army got the ball back looking to pounce. But quarterback Angel Cendejas&rsquo;s third-down pass was intercepted by Arkee Jones, which set up the Navy&rsquo;s first score - a shovel pass to Lorenz Piper.

Three possessions later, Piper dropped a touchdown in the end zone, which ended a long drive that was set up by Antoine Holden&rsquo;s fingertip interception off Cendejas. And then, on the last play of the half, deep in their own territory, Army delivered on perhaps the play of the game. Off a flea flicker, Cendejas launched one deep downfield to Brydson, who caught it in traffic and outran defenders for a momentum-changing score.

&ldquo;I&rsquo;ve been playing with my receivers all year long - Army versus Army - and I know they&rsquo;re going to go get it,&rdquo; said Cendejas of the play. &ldquo;All I have to do is throw it up, and they do the rest. I just get them the ball. They&rsquo;re outstanding.&rdquo;

Navy opened up the second half with a long drive that was once again undone by dropped passes. After Army turned the ball over on downs, Navy got the ball back with good field position and only down, 12-6. Rodney Evans cut to the middle to receive the pass from Seaman on fourth and goal and scored. The ensuing conversion made it 13-12 Navy.

Army got the ball back with under 5 minutes in the game and converted another big play. This time it was Cendejas on the receiving end, catching a long pass before stepping out of bounds inside the Navy 20. Three plays later, Cendejas took a pitch and scored easily. The conversion made it 19-13 Army. On the next series, Slan&rsquo;s interception return iced it.

&ldquo;We take it pretty serious,&rdquo; Navy&rsquo;s Holden said of the annual game. &ldquo;We practice religiously all the time. Last year, we were the defending champions. We lost today but it was a close game. They were the better team today.&rdquo;

Afterword, Army players celebrated on the field and posed with the trophy, which will be housed at Camp Zama at least until next year.

&ldquo;We had to come out here and get the win, and get the trophy. Go Army!&rdquo; said Walker, smiling.