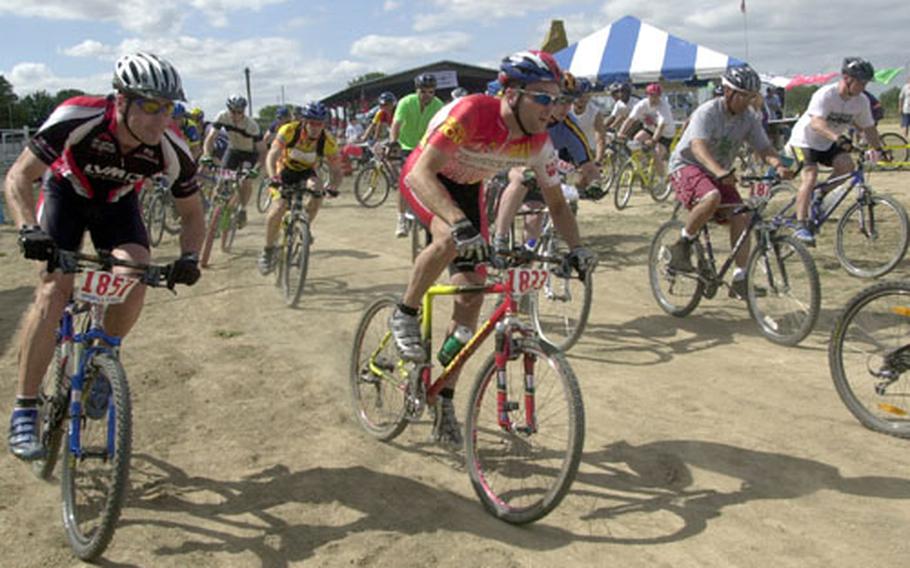 Mountain bike riders burst out of the starting line in the seventh of eight races of the Chrysler 2003 U.S. Forces Mountain Bike Championships in Dexheim, Germany, on Saturday. (Raymond T. Conway / S&S)

DEXHEIM, Germany &#8212; Staff Sgt. Dave Gallagher of the 469th Air Base Group out of Rhein-Main Air Base has no competition.

Before Saturday&#8217;s race, Gallagher held 81 points in the military senior category series standings. His closest competitor was 32 points behind.

So, when Gallagher went up against members of the Armed Forces bike racing team on Saturday, he just tried to keep up and get some pointers from the veteran racers.

The race was won by Armed Forces team member Trent Hornus, who also captured the Mountain Bike Series a couple of years ago.

&#8220;I&#8217;m just doing this for some fun and training," said Hornus, who said he mainly sticks to street races with the Armed Forces team.

Gallagher, though, is preparing for the final mountain bike series race, to be held Sept. 6 in Garmisch. He doesn&#8217;t plan on coasting to the championship, he said.

The event in Dexheim was temporarily halted just before the final race to search for a person who shot a bicycist with a B.B. gun during the race.

Military and German police closed off the race course to search the area, but the culprit was not found. The cyclist suffered minor injures.

Men and women, either military or civilian, can participate in the mountain bike series, which is staged on courses throughout Germany.

Rompa and Barry trained for the race together. They said the hardest part of the 4.7-kilometer circuit was having to bike through the mud pit.

Complete race results were not provided before this edition of Stars and Stripes went to press.