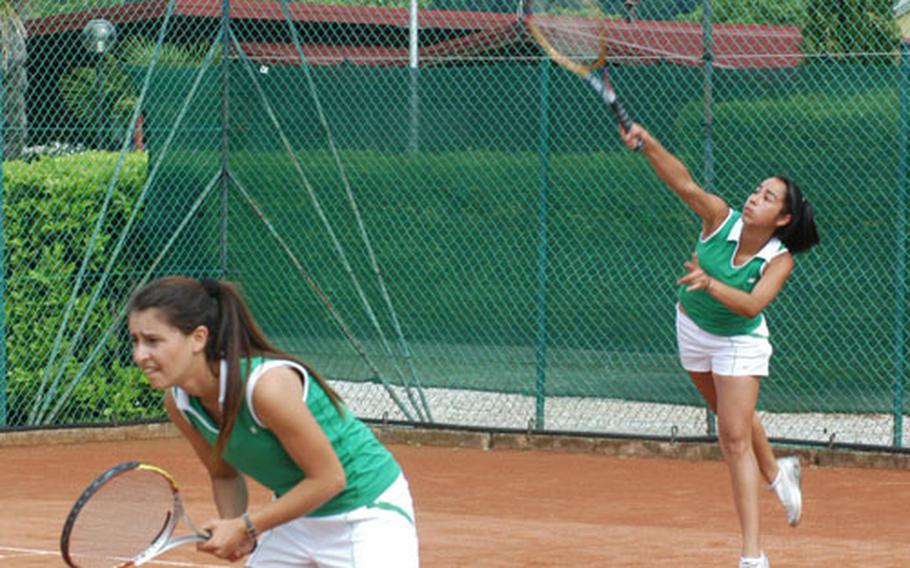 Jessica Ortega of Naples serves during the finals of the DODDS-Europe Mediterranean tennis championships at Maniago, Italy, on Saturday. She and partner Leila Rajazi won in straight sets to capture the school’s first tennis title in several years. (Kent Harris / S&S)

Jessica Ortega of Naples serves during the finals of the DODDS-Europe Mediterranean tennis championships at Maniago, Italy, on Saturday. She and partner Leila Rajazi won in straight sets to capture the school’s first tennis title in several years. (Kent Harris / S&S) 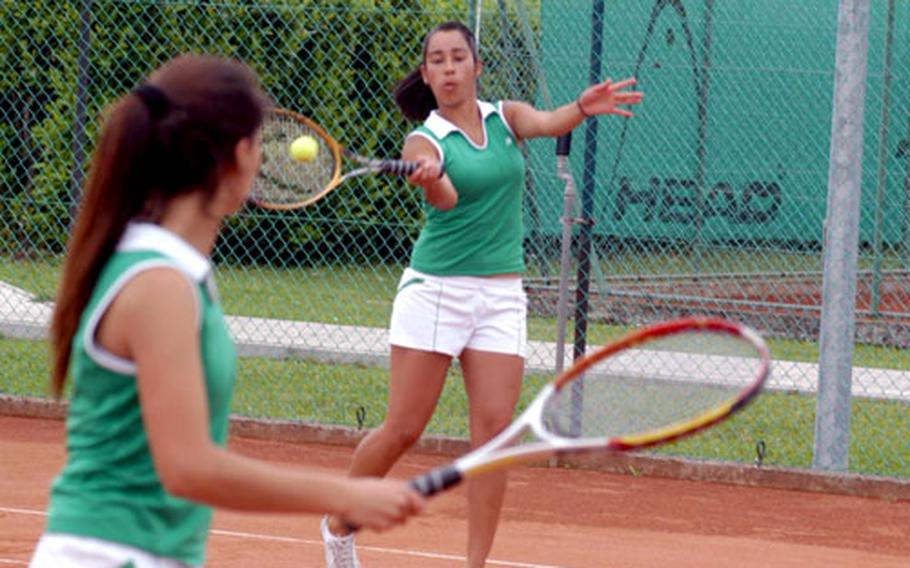 MANIAGO, Italy &#8212; There wasn&#8217;t much doubt about who fielded the best boys tennis team in the DODDS-Europe Mediterranean tennis championships.

And there was even less doubt who the best female player was.

The American Overseas School of Rome won the boys singles and doubles titles Saturday, and Milan&#8217;s Shivani Saxena cruised to her second straight girls title without dropping a game in the finals.

The pair went undefeated this season and their doubles record at Naples will remain perfect. Ortega, a freshman, will leave Naples after the school year, and Rajazi is a senior.

What was their secret for success?

Not that there was a lot to get down about. The two were extremely effective at the net, crushing the ball each time Aviano floated a weak return within reach.

The two Naples players are the team&#8217;s strongest players, but decided to concentrate on doubles rather than singles this year.

Much better than beating Saxena in singles.

The junior finished second in DODDS&#8217; European championship tournament last year, falling in the title game. That tournament came in her offseason, because high school tennis in Italy is played in the spring, while the sport takes place in the fall in the rest of DODDS-Europe.

Born in New Jersey, Saxena has lived in Milan for most of her life.

AOSR&#8217;s Roy Forberg knows the feeling. Forberg didn&#8217;t lose a game all year until the tournament this week. And the defending champion almost matched Saxena&#8217;s accomplishment in the finals, defeating Milan&#8217;s Aaron Crosby 6-0, 6-1.

&#8220;It&#8217;s always nice to have another trophy,&#8221; said the senior, who is planning to either play tennis for a club team in Spain next year or attend college in London.

His teammates, Jacob Kopf and Josh Kneeland, completed the AOSR sweep by defeating Incirlik&#8217;s Kris Roeske and Bryn Roehe 6-1, 6-3 in the doubles finals.