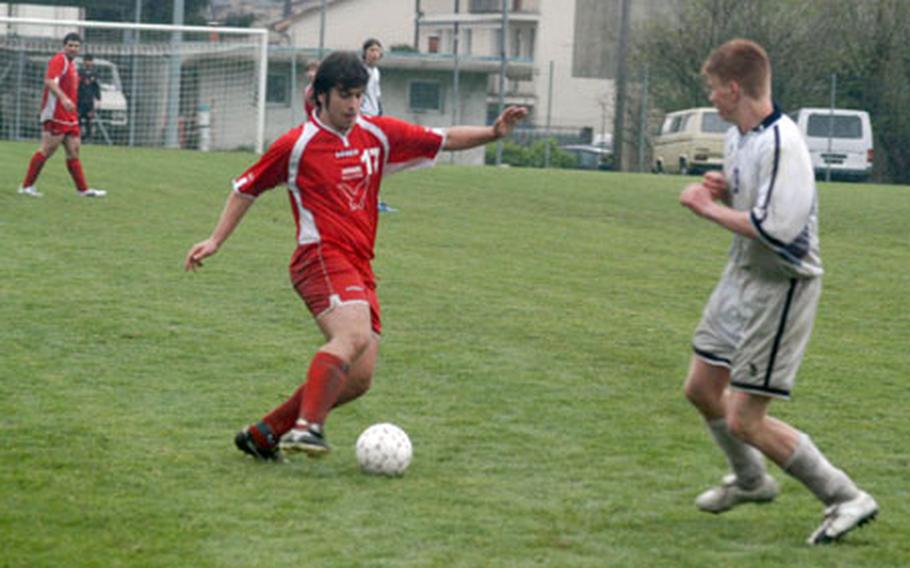 Aviano&#39;s Josh Cafferty defends against Ludovico Linari from the American Overseas School of Rome as he dribbles the ball during AOSR&#39;s 3-0 win Saturday in Aviano. (Kent Harris / S&S)

On Saturday, Aviano found out why.

AOSR, which lost in the final of the European Division III tournament last year, took advantage of an early opportunity, kept the Saints from the net and finished with a flurry for a 3-0 victory.

David Ananiades scored early to give his team the only goal it needed. He advanced rapidly from the right side after Aviano goalie Justin Bowen was lured from the box, leaving Ananiades an empty net.

Aviano (1-2) threatened to tie the game several times in the half and early in the second, but couldn&#8217;t get the ball past goalkeeper Alessio Daswani. Corey Potter had one of the best chances, but his shot from in front of the goal hit the crossbar and bounced over the net.

Todd Kopf&#8217;s corner kick wasn&#8217;t touched by anybody and curled into the net for a 2-0 lead. Fabrizio Menghini collided with an Aviano defender while making a run toward the goal a few minutes later, but returned to his feet, found a loose ball and kicked home the final goal for AOSR (2-0).

AOSR had a 10-3 advantage in shots on goal in the second half after just an 8-6 edge at halftime.

AOSR coach Andrea Desideri lost five starters from last year&#8217;s team and says it is too early to tell about his team&#8217;s chances of returning to the finals.