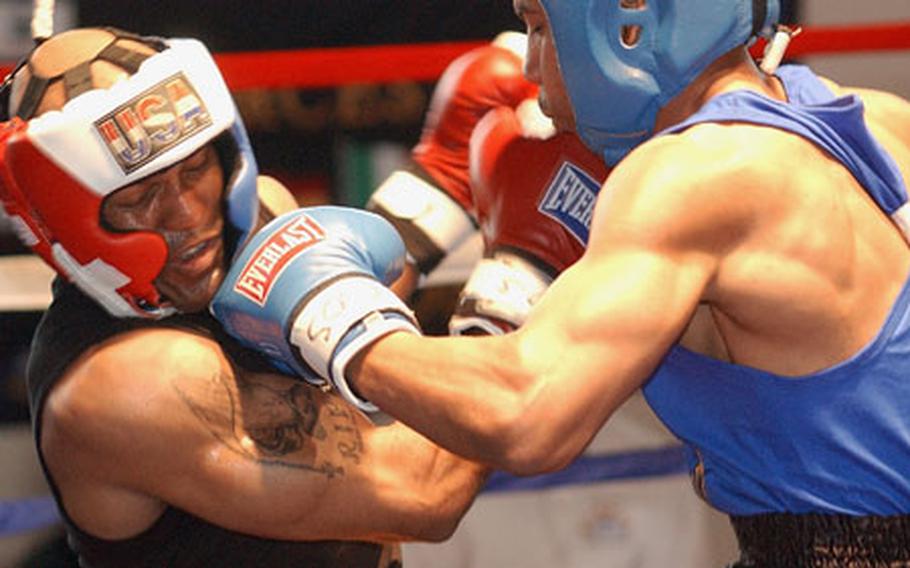 Hard, and quickly, too, Aruwah added.

Aruwah won his title with a 3-2 verdict over his more experienced opponent, Benjamin Bradley of Hohenfels. He accomplished the feat despite a KO-defying low-hands style that invited Bradley to attack.

Almonte&#8217;s tactics worked for Ansbach&#8217;s uncontested novice 186-pound champion, Alein Lopez, and novice 165-pound king Kenneth Torregano, a 3-2 winner over John Brogdon despite injuring his right arm during the bout. Torregano, however, used a big left jab to come back in the final three rounds.

Almonte might have provided a fourth Ansbach champion, but he dropped a 4-1 verdict to Raymond Myers of Hanau in a 165-pound open title bout that added the element of revenge to Sunday&#8217;s card.

Myers, who thanked Almonte after the bout for requiring him to reach back for as much as he had, said he was pleased to have another shot at his old foe.

Heidelberg&#8217;s women romped to their team title, 18-4 over Spangdahlem, the only other women&#8217;s team in the event. Heidelberg&#8217;s Kristin Campbell and Wilantha Silva claimed their crowns without opposition, while Lady General Candace Young outpointed Spang&#8217;s Alma Ramirez, 5-0 for the 132-pound title, despite mouthpiece problems that resulted in two warnings for failing to keep it in place and losing it once onto the canvas.

Heidelberg&#8217;s men crowned a once-and-present champion, 125-pound novice Daniel Rodriquez. Rodriquez, who won an Army-Europe crown in 2002 before spending 2003 in Iraq, downed Hao Pham of Hohenfels 5-0 with an impressive display of counterpunching.

The amateur equivalent of the technical knockout ended two of Sunday&#8217;s bouts. Adam Klakowicz of Hanau, by way of Philadelphia, decked Heidelberg&#8217;s Jose Rivera with a short right cross that ended their novice 125-pound match at 17 seconds of the fourth round, and James Heath of Ramstein stopped Benjamin Rivera of Kaiserslautern 40 seconds into Round 4 of a furious, crowd-pleasing fight for the 178-pound open title.

&#8220;I come from a boxing family,&#8221; said Klakowicz, who sports a &#8220;Lucky Lefty&#8221; tattoo on the appropriate arm and another of the Liberty Bell on the side of his right calf. The unlucky lefty on Sunday was his opponent, Heidelberg&#8217;s Rivera, but not before Rivera gave Klakowicz a taste of his own medicine. Rivera is a lefty, too.

Like Torregano, Heath won with one hand. His right arm had to be reinserted into its socket in the first round of his bout.

The bout was Heath&#8217;s first in the open division, required for those who have boxed 10 times.

According to Aruwah, Heath stepped up in more than experience.