Ansbach's Marcus George is DODDS-Europe football coach of the year 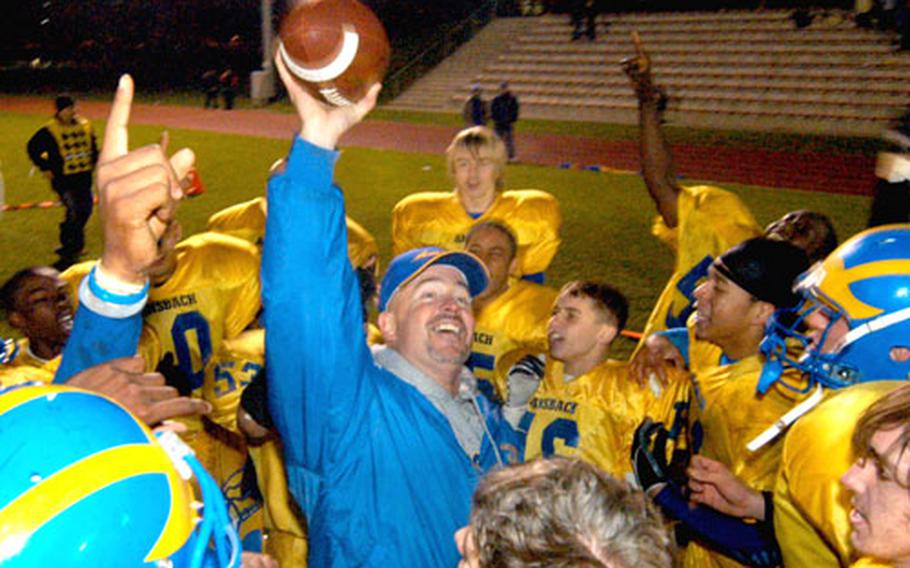 For taking an undersized team to the school&#8217;s fourth European Division III title in five years, Ansbach&#8217;s Marcus George was selected 2006 coach of the year by the European American Football Coaches Association.

&#8220;We got a lot of sympathy at [the annual preseason football] camp when people saw how small we were,&#8221; George said by telephone Wednesday. &#8220;We had four or five athletes we could build around, but we told our team that to win a European title would require the maximum commitment. We&#8217;d have to outwork everybody else.&#8221;

The Cougars responded by downing 2005 European Division II champion Hanau 8-6 in the season opener and powering from there to their fourth unbeaten season since George took over in 2001.

The Cougars capped their season with a 34-6 title-game victory over previously unbeaten AFNORTH that produced George&#8217;s record eighth European title. He won three at Fulda before that school closed; another at Hohenfels, where he started the program when the school opened in 1995; and four at Ansbach, where he has a 40-4 record.

Between his stints at Fulda and Hohenfels, George guided Frankfurt to the Division I championship game in that school&#8217;s final two seasons.

George reacted to his award with typical modesty.

&#8220;Any time you have a program in place like we have in Ansbach with a great staff and great faculty and community support, you feel that you might not be as deserving as someone who&#8217;s built something out of nothing,&#8221; he said. &#8220;With the quality of coaches we have in Europe, it&#8217;s humbling to be nominated, let alone win.&#8221;

Jim Hall of Naples, whose Wildcats dropped a last-minute 27-24 verdict to Bitburg in the European D-II title game, was runner-up for coach of the year.