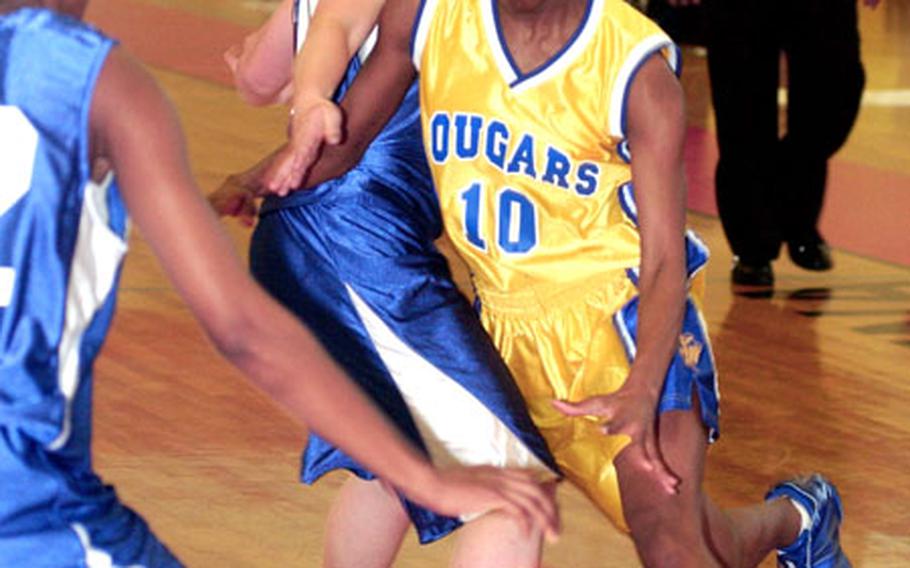 Brittney Britton (10) averaged 15.9 points, 6.8 rebounds and 4.3 assists a game for Ansbach, which had its 33-game winning streak snapped in a Division III title game loss to Rota. (Michael Abrams / S&S)

For most high schoolers, being chosen as athlete of the year is just a dream.

For Ansbach&#8217;s three-sport star, Brittney Britton, it was a prod.

It paid off handsomely.

Last week, Britton was voted the 2005 DODDS-Europe athlete of the year by a panel of coaches and administrators,

Britton made the All-Europe first team in volleyball (41 kills, 15 blocks, 22 service aces) and basketball (15.9 points, 6.8 rebounds, 4.3 assists per game) and placed in three of the four events for which she qualified in the European track and field championships in May.

Not bad for someone who originally wasn&#8217;t even supposed to be in Europe last school year.

Asking to stay was a vintage Britton move. Staying in Europe probably cost her a chance to immediately vie for a place on the UT-San Antonio volleyball team, but it allowed her to do something she valued more &#8212; being a part of something special with her teammates at Ansbach.

Better for Ansbach, for sure.

Britton was the &#8220;leader and strongest player&#8221; on the European Division III championship volleyball team, coach Rich Peters said. &#8220;She can be counted on to correct the errors made by the other players. Her upbeat attitude is contagious.&#8221;

In basketball, in which Britton starred for coach Mick Plummer for three years, &#8220;Brittney was our top player.&#8221;

With Britton leading the way, Ansbach compiled a 15-1 mark last season, losing only to Rota in the European Division III title game. It was the first loss in 34 games for the Lady Cougars, who won the European title in 2004 and placed third in 2003.

&#8220;Brittney is an excellent ballhandler who sees the court very well and passes as well as she shoots,&#8221; Plummer said.

&#8220;She can shoot three-pointers as well as drive to the basket and score over much taller players. Defensively, she has very quick hands and feet and can run forever without slowing down.&#8221;

According to Gary Feletar, coach of the European Division III champion Ansbach track team, Britton was unbeaten in the 800 meters and 100 hurdles until the European finals.

Athletically, Britton has been told she&#8217;ll be on the sidelines, at least at first, in San Antonio.

Even if the athletic department at UT-San Antonio doesn&#8217;t give her a tryout, Britton believes all the work she put in to become Europe&#8217;s athlete of the year was worth it.

Other DODDS-Europe female athlete of the year nominees