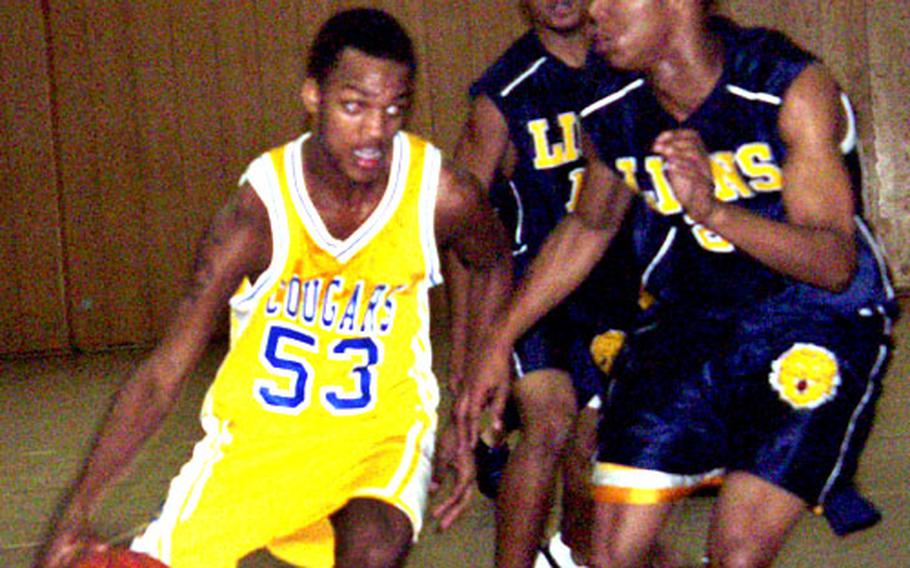 Ansbach’s Jon Austin (left) drives around Heidelberg’s Jonathan Williams during Friday’s game. With his mother deployed, Austin will return to the States over the holidays. (Stars and Stripes)

Austin, a 6-foot, 162-pound sophomore, has emerged as one of Europe&#8217;s most skilled athletes, having helped lead Ansbach to a pair of Division III football championships and earning all-conference and Division III-South tournament MVP honors in basketball last year.

But the Cougars will have to play without their star this basketball season. With his mother deployed, Austin is leaving for Fayetteville, N.C., when Ansbach breaks for the holidays.

The loss not only hurts the Cougars, but the Department of Defense Dependents Schools, too, said Ansbach coach Ted Marr.

Ansbach went unbeaten in both seasons the ball-hawking Austin played defensive back. He had eight interceptions as a freshman and six more as a sophomore.

&#8220;I can recall very few ninth-graders who ever played for me,&#8221; said Ansbach football coach Marcus George, who&#8217;s won six European titles during stops at Fulda, Frankfurt, Hohenfels and Ansbach. &#8220;I&#8217;ve had athletes with talent, but usually you have to wait a year for them to develop. Jon stepped right in.

Judging by last Friday&#8217;s game, Austin was putting together a bid to become an All-Europe basketball player, according to Marr.

Part of his development came at a summer camp in Italy.

&#8220;We worked on jump shots every day,&#8221; said Austin, who knows the competition will get tougher when he moves to North Carolina.

But Marr said Austin has the tools to play at the higher level.

Although his most success so far has come in football, Austin said basketball is the game he&#8217;d like to pursue on the next level.