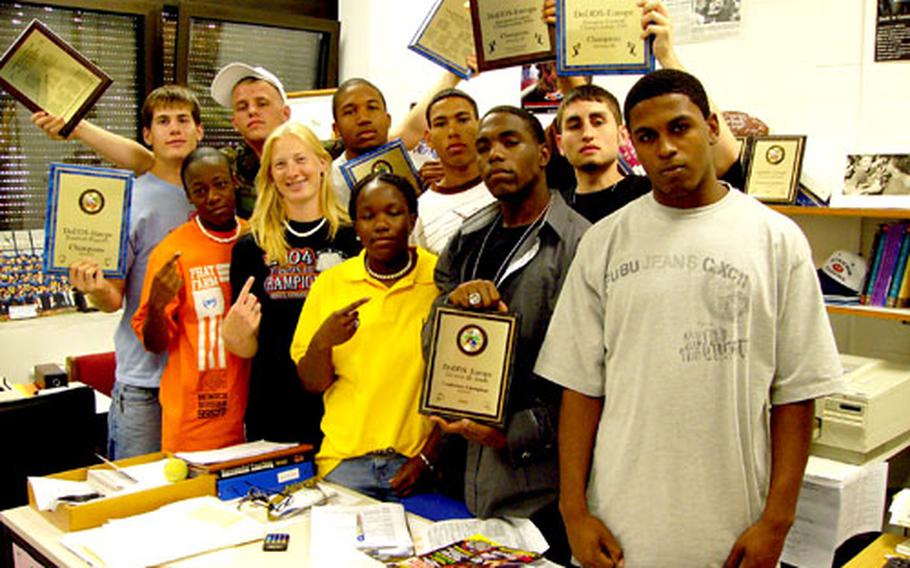 Ansbach senior student-athletes show off some of the hardware they have helped the school win during the past three years. They are, from left, rear: Adam Golden, Mike Ewing, Russell Bailey, Taurean Moore and Brandon Bachtel; and from left, front row Brittney Britton, Alison Hazen, Keke Johnson, James Esters and Dameon Outley. (Rusty Bryan / S&S)

Size didn&#8217;t matter for two DODDS schools whose sports teams had big years despite their small size and, in the case of one school, remoteness.

Brittney Britton&#8217;s selection as DODDS-Europe&#8217;s 2005 female athlete of the year caps a remarkable run for the senior class at Ansbach, which produced 10 European Division III championship teams &#8212; five this year &#8212; and two European athletes of the year over the past three years.

Rota, which in some sports plays no regular season because it is alone in southern Spain, nevertheless claimed European titles in boys and girls basketball, golf and softball during the past school year.

And there is more. Ewing, DODDS-Europe&#8217;s 2004 male athlete of the year, and Golden also led the Cougars to the European division wrestling title in February, while the Lady Cougars&#8217; volleyball team, led by All-Europeans Britton and Alison Hazen and all-conference performer Krysta Rangel, won it all in October.

In addition, Britton, All-European Keke Johnson and Hazen claimed a European Division III basketball title in 2004 and placed second this season to Rota. Hazen and Johnson pushed Ansbach to two European runner-up finishes in soccer the past two seasons, and Britton, with silver in the 800 meters and fourth-place finishes in the 100 hurdles and discus, spearheaded the girls track team to the 2005 crown.

Smallness also encourages bonding that pays off on the playing field.

Jessica Brewer, named to the 2005 All-Europe softball team as a shortstop, says the school&#8217;s size gives all students a chance to develop their talents.

All it takes to overcome the isolation, said athletic director Greg Jacobs, who coached the golf and girls basketball teams, is &#8220;good kids, good athletes and good coaching.&#8221;

Senior Jason Allard, runner-up for the European golf title and a member of the championship basketball team and runner-up soccer squad, cited community backing as another key to success.

All-Europe basketball guard Sam Crowder probably would have earned a scholarship had she stayed in Washington, D.C., after 10th grade. Instead, she&#8217;s going to be a walk-on at tryouts for her college team this fall.

And making a contribution to Rota&#8217;s growing athletic legacy.