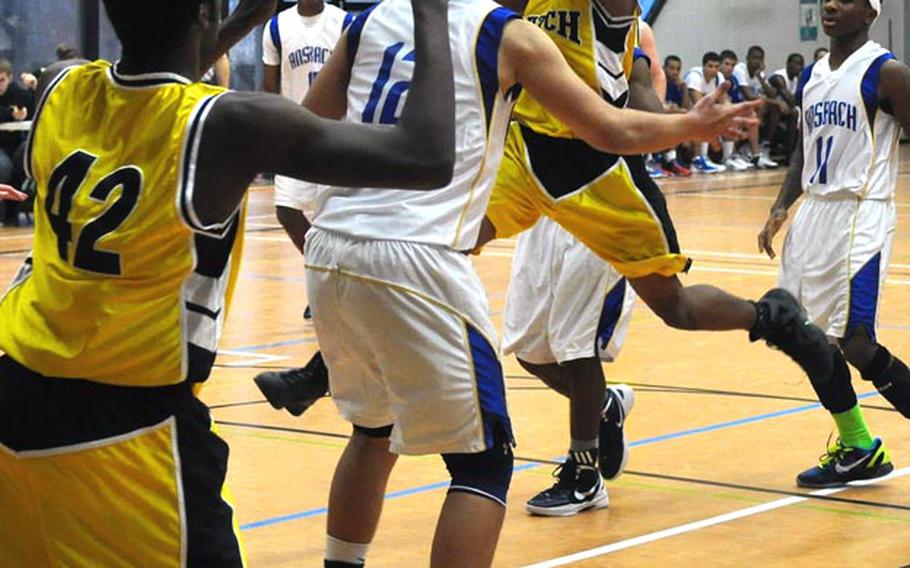 Patch's Jaymes Kingsberry attempts a layup during a game Patch hosted against Ansbach on Saturday. Patch won the game, 61-46. (David Rogers/Stars and Stripes)

STUTTGART, Germany &ndash; Patch&rsquo;s boys and girls had a successful weekend winning all their games Saturday and Friday against Ansbach.

As usual, Janelle Loney, three-time All-European and the 2011 Stars and Stripes player of the year, was the star of the show with 29 points, 11 rebounds, seven assists and seven steals in Patch&rsquo;s 52-24 victory over Ansbach Saturday. Johanna Quinn also got 10 points and 12 rebounds.

Patch, one of only two unbeaten girls team in DODDS-Europe at 6-0, beat Ansbach on Friday night, 48-24, in similar fashion in that Patch was almost always in control.

&ldquo;We have a different style game,&rdquo; Patch coach John Kohut said. &ldquo;Maybe they&rsquo;re not used to what we play like. But they&rsquo;re tough. They were getting boards and they&rsquo;re very physical on the court.&rdquo;

Kohut seemd to use the game as an opportunity to help his player practice new roles as he often switched his players&rsquo; positions during the game.

&ldquo;We tried to do a little more rebounding because they were beating us on the boards. They were getting a lot more offensive boards and we weren&rsquo;t executing correctly. So we went back the second half and worked hard on rebounding and boxing out.&rdquo;

The Panthers improved to 4-0 in Region III and 6-0 overall, keeping pace with defending D-I champion Heidelberg atop the standings.

Patch coach Bill Lassetter said he ensured his team maintained control and tempo by keeping the pressure high Saturday after nearly losing a lead after the first quarter in Friday&rsquo;s game.

&ldquo;(Friday) after the first quarter, I thought they played really aggressively and we kinda just tried to hold the lead. You see teams lose that lead simply because they&rsquo;re playing defensively rather than attacking offensively. And that&rsquo;s what happened yesterday. We just kinda sat back after a big lead and said &lsquo;well, let&rsquo;s just kinda control them and we couldn&rsquo;t do that.&rdquo;