Anderson best of the bunch 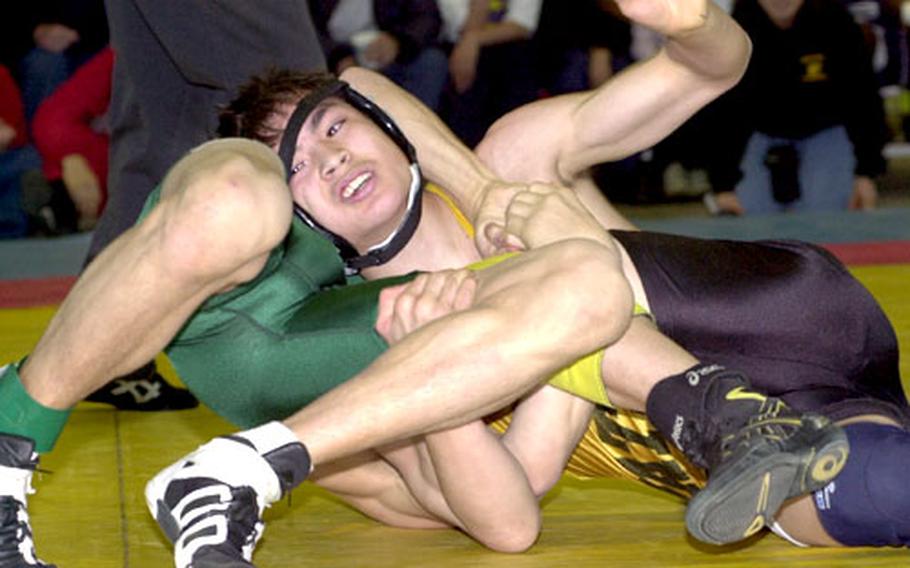 Here&#8217;s how to build a better wrestler: Toss him in with plenty of big brothers.

As a seventh-grader at Osan, Korea, the 85-pound Anderson wrestled 101-pounders in exhibitions, losing three times. Since then he has not been beaten, posting a 10-0 exhibition mark as an eighth-grader in Osan and winning the European championship at 103 and 125 pounds at Patch.

There are reasons beyond brotherly combat for those off-the-chart marks. Anderson cites the coaching of volunteer Matt Koenigsfeld, a former sailor, and the motivating aspect of being a part of the special teams Koenigsfeld has molded at Patch the past two seasons.

&#8220;During my freshman year of high school, I had the things that make champions,&#8221; he said, &#8220;a great coach and great teammates to motivate each other. As a team, we won the Division II crown for the first time ever, and had more European champions [four] than any other team in Europe.&#8221;

Anderson, who also plays football and soccer at Patch, was the only freshman to claim European gold that season, impressive enough for anyone, much less for the new kid from Korea.

It was the last time. These days, any intimidation that occurs comes from the prowess of the genial Anderson, who spends his time between matches chatting with teammates and opponents.

Nowhere were Anderson&#8217;s strengths more evident than in Saturday&#8217;s title match against Casey Clawson of Heidelberg. The ever-aggressive Anderson struck for a single-leg takedown in the first 20 seconds, then answered Clawson&#8217;s nifty stand-up escape with a two-leg takedown just before the first period expired. Electing to start the second period on his feet, Anderson quickly took Clawson to the mat and locked in an arm-bar. When that didn&#8217;t produce the fall, Anderson quickly switched to a half-nelson combination for the pin without the talented Clawson&#8217;s having time to try to react to the move.

The only two-time defending champion in Europe, Anderson, who spent the summer at a camp at St. Leo&#8217;s University in Florida run by 2002 Olympic champion Brandon Slay, has clear goals for his wrestling future.

If he does, he&#8217;ll finally beat all those big brothers.