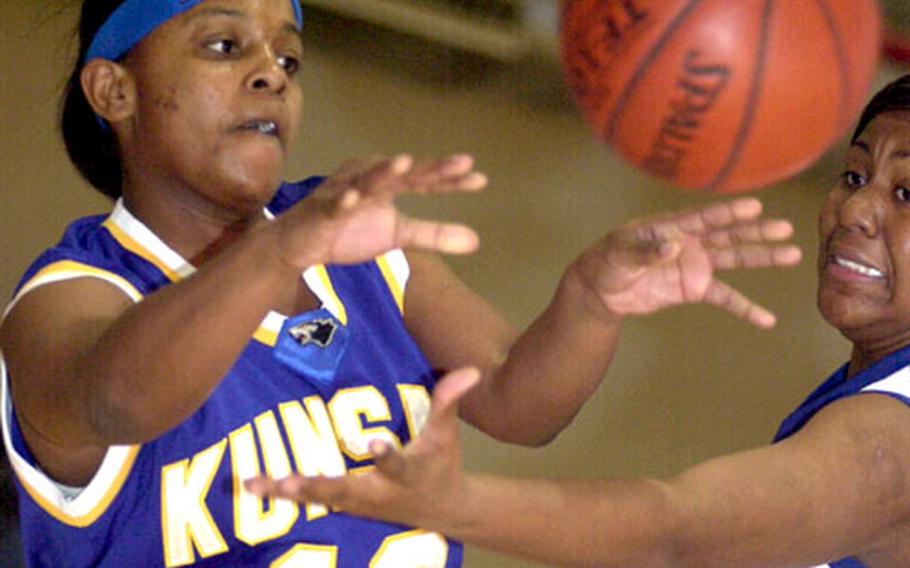 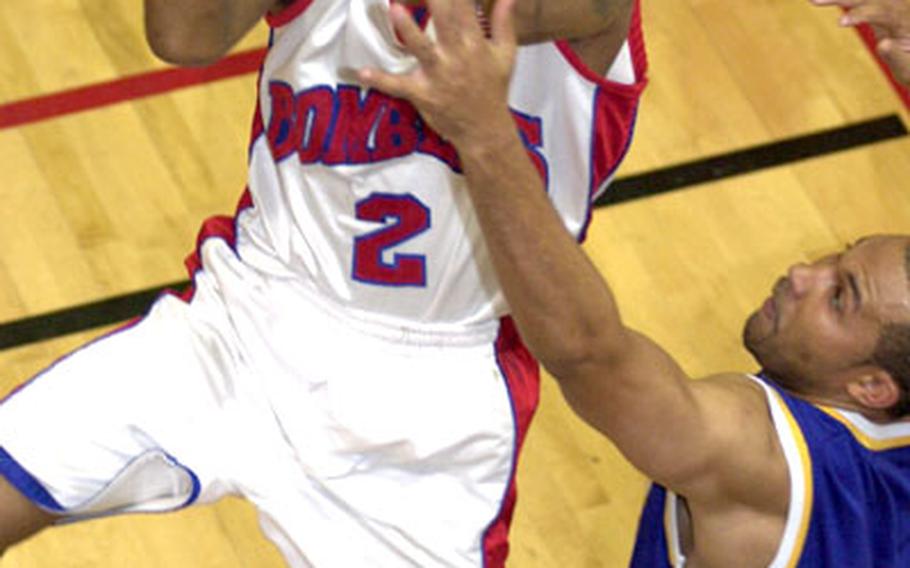 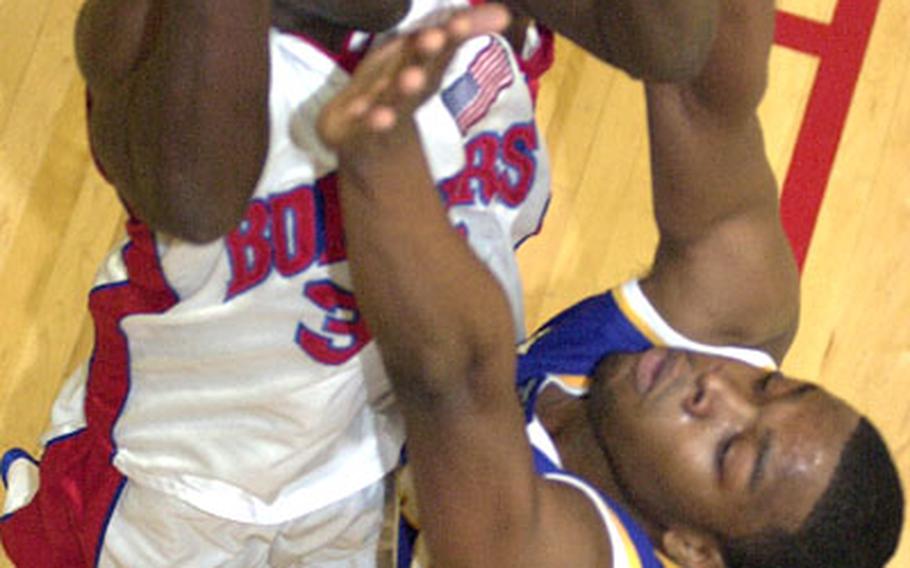 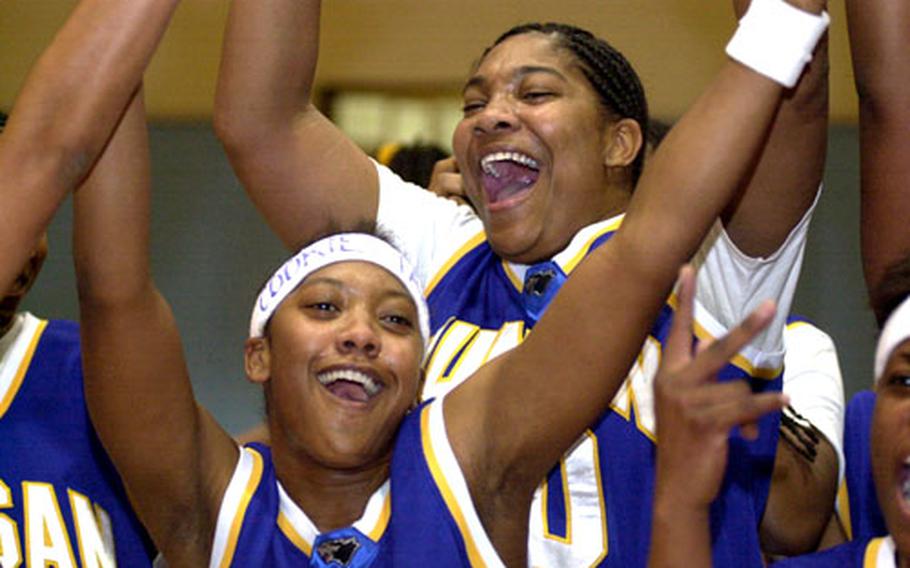 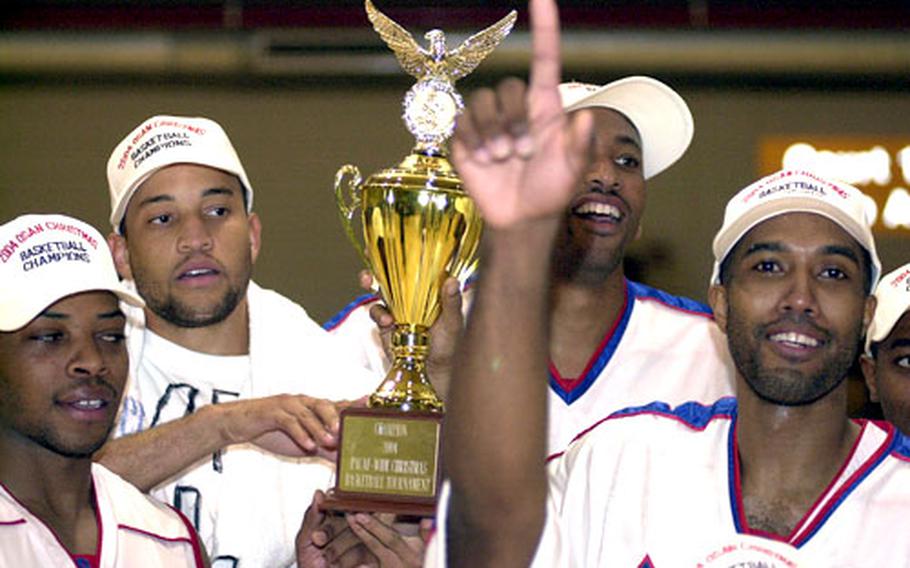 Cliff Claybrooks hit five three-pointers and scored 34 points, including the go-ahead basket with 2:30 left, as Guam&#8217;s Andersen Bombers rallied from an 11-point second half deficit and beat Korea&#8217;s Kunsan Wolf Pack 86-82 in the men&#8217;s final.

Meanwhile, speed outdueled size, as diminutive MVP Amoni Sutice poured in 26 points and the Wolf Pack women came from seven points down in the first half and outran Korea&#8217;s Camp Humphreys Bulldogs to a 76-66 title triumph.

"Not bad for an ex-Far East champion," he said with a smile.

Of his hot shooting, Claybrooks said, &#8220;We needed it. The first couple went in and I was on a roll after that. My teammates gave me the ball at the right time in the right place.&#8221;

None of it would have come about were it not for a variety of pressure defenses that coach Gerrard Barnes used in a successful effort to turn things around and weary a Kunsan squad that needed a 98-94 overtime win earlier Thursday over host Osan just to reach the final.

There were 17 lead changes and seven ties.

After Claybrooks gave Andersen the lead for good, the Bombers still had to fight to hold the edge. Jacoby McLaurin, who led the Wolf Pack with 24 points, got Kunsan back within 83-82 with a three-point goal, then the Wolf Pack missed four close-in shots in the final seconds.

For the first 25 minutes of the women&#8217;s final, the Bulldogs&#8217; size dictated play. Outsized on the boards, particularly by center Yolanda Jackson, who had 15 rebounds, the Bulldogs built a 31-24 lead 3:40 before halftime. Kunsan rallied briefly, but Humphreys ran it back up to 41-34 with 15 minutes left.

Then Kunsan&#8217;s speed and quickness took over, and the Wolf Pack outscored the Bulldogs by 17 the rest of the way.

Coach Tre Fields shared that confidence, and credited the comeback to his team&#8217;s conditioning.

Bulldogs coach Douglass Clarks said he had a feeling that a seven-point lead wasn&#8217;t good enough.