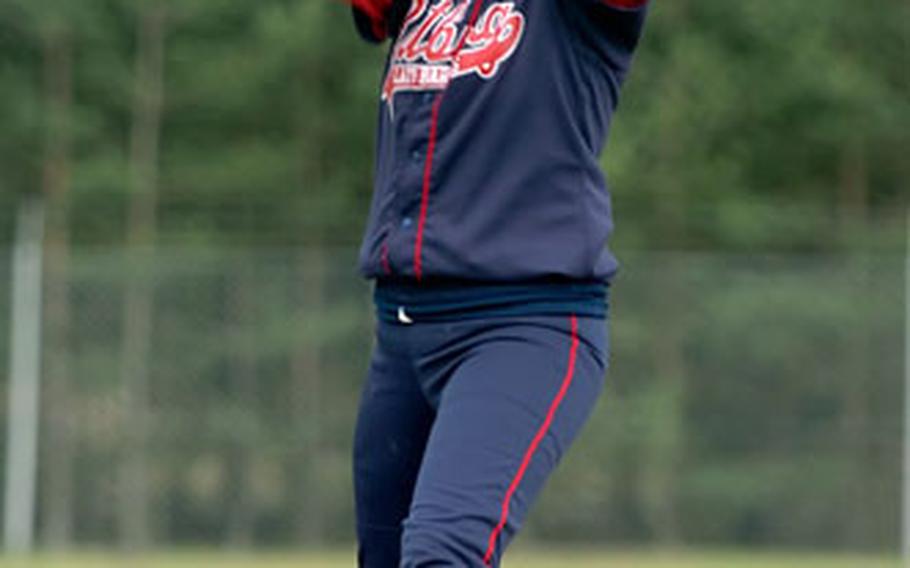 Ashley Kazimer, a pitcher and shortstop for Bitburg, was selected to the All-Europe team for the third straight year. (Raymond T. Conway / S&S)

How skilled is the 2006 DODDS-Europe All-Europe high school softball team?

While Velazquez, as one of the selectors of this year&#8217;s all-star squad, might be accused of prejudice, the numbers back him up.

Also on the staff are Bitburg&#8217;s Ashley Kazimer, who made the first team in 2005, the second team in 2004 and posted a gaudy 5:1 strikeouts-to-walks ratio in 2006, and Jasmine Velazquez of Baumholder.

Velazquez, who routinely struck out 10 or more every time out, pitched a perfect game in the European Division III tournament against Rota to help the Lady Bucs roll to the title.

Other strong arms on the staff belong to Lauren Sanchez of Patch, a first-team repeater from 2005 who struck out 32 batters; Brynn Lipor, an All-Europe second-teamer last season for regular season D-1 champion Lakenheath; fireballing Jessica Smith of Wiesbaden, who struck out 72 batters; Micana Gallaway of London Central; and senior Lindsey Dunn from Division I champion Ramstein.

Others driving in 20 or more runs included Patch&#8217;s Lalau and Sanchez, a third baseman, while Lalau was on the mound; Ramstein left fielder Alexa Brokaw; and Lakenheath shortstop-center fielder Ashley Mansfield, who posted an .814 slugging average.

&#8220;She has a laser arm (16 of 24 thrown out attempting to steal), and great lateral movement behind the plate,&#8221; Velazquez said of the only player younger than a junior to make the first team.

Renaud of Bitburg made just one error all season and threw out four runners at the plate from center field, while Dunn, moved to first base for defensive reasons, Grosshuesch said, and Kazimer, a shortstop when she wasn&#8217;t pitching, made none at all.

Shortstop is in excellent hands with Sharena Cabrera of Baumholder, who, according to Bean, &#8220;could start at any position for any team in Europe,&#8221; and .575-batting Jamie Beach of Ramstein, whose unassisted double play in the European D-1 tournament, according to Grosshuesch, turned the tide against Lakenheath&#8217;s regular-season champs.