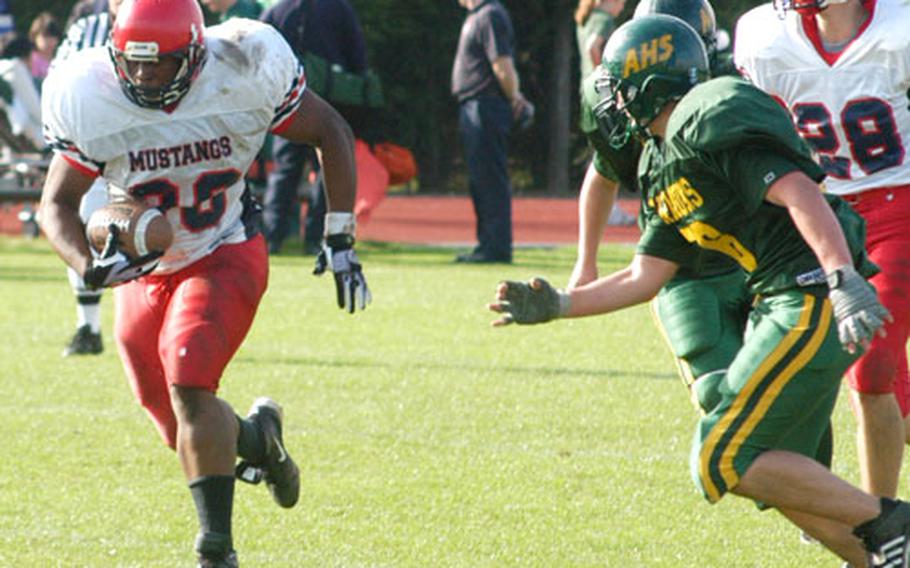 RAF ALCONBURY, England &#8212; Even though Menwith Hill spoiled Alconbury&#8217;s hopes for a homecoming win Saturday with a 42-21 victory, both teams walked off the field with their heads high.

For Alconbury (0-5 overall, 0-2 Division IV), those three trips into the end zone were one more than it had during the first four games of the season, coach Duke Eidt said after the nine-on-nine game.

For the Mustangs, the win provided more momentum heading into next week&#8217;s game with Hanau. Both teams are 2-0 in Division IV and have already clinched berths in the championship game next month.

Eidt said that scoring 21 points shows his young Dragons that they can move the ball.

Success hasn&#8217;t come easily for Menwith Hill, either. The Mustangs, 2-3 overall, have had to play 11-man ball at times this season, despite a roster that necessitates nine-man play, coach Peter Resnick said Saturday.

One thing the Mustangs do have is senior La&#8217;Shawn Adams, who has been averaging around 200 yards per game. Saturday, he had a merely mortal game by his standards, rushing for 151 yards on nine carries with one touchdown and a fumble.

Still, Menwith Hill dominated on both sides of the ball in a game marked by numerous turnovers and onside kickoffs.

Mustangs senior Eddie Berrera opened the scoring with a 10-yard touchdown run in the first quarter. Quarterback Scottie Setzer made it 14-0 with a two-yard run.

Alconbury responded when sophomore Devon Pryor caught one of three TD passes thrown by quarterback Jimmy Luong, who was 11-for-21 passing for 252 yards. He also had three interceptions.

Menwith Hill tacked on two more TDs before half, the first on a 45-yard dash by Adams and the other on a 3-yard run by senior Chris Cruickshank that built the lead to 29-6.

In the second half, Luong connected with Pryor and freshman Ronnie Wilson for touchdowns, but Menwith Hill countered with a second TD run by Setzer and one by sophomore Chase Rexroat to maintain a safe margin.