Bitburg's Darren Aiken, right, pulls down a rebound ahead of Wiesbaden's Gary Miskovsky in boys high school action in Spangdahlem on Saturday. Wiesbaden beat the Barons 59-42. (Michael Abrams/Stars and Stripes) 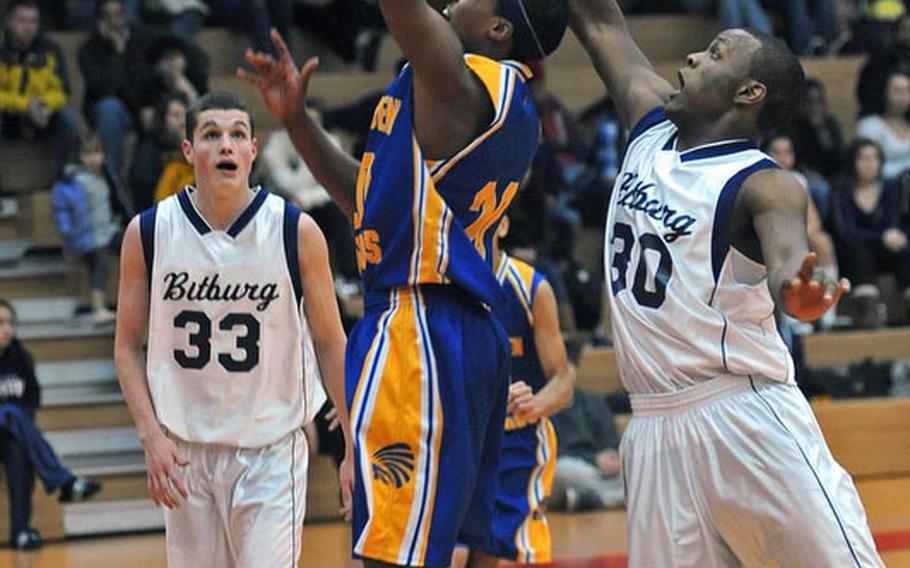 Bitburg's Rashaun Wimberly, left, gets past Wiesbaden's Andrew Murray for a first-half basket. Wiesbaden beat the Barons 59-42 in Spangdahlem on Saturday. (Michael Abrams/Stars and Stripes)

Alconbury&rsquo;s 6-foot-5-inch senior Chris Lanphear threw a second-straight block party on Saturday in the Dragons&rsquo; 40-36 Region I Small-Schools victory over the Brussels Brigands.

Lanphear, who blocked 10 shots in a 42-39 loss to Brussels in a Friday game designated as non-conference, came back in Saturday&rsquo;s conference tilt to reject eight Brussels shots. In addition, Lanphear took game scoring honors with 18, and grabbed eight rebounds in an individual duel against 6-6 Brussels center Braden Brower.

Brower, who scored 28 points on 53 percent field-goal shooting on Friday, tallied 17 on Saturday and matched Lanphear with eight rebounds.

Saturday&rsquo;s victory gave Alconbury a leg up in the Small-Schools race in Region I. Unlike the Division III teams which compete in the school system&rsquo;s Regions III and IV, the D-III schools of Region I &ndash; Alconbury, Brussels, Menwith Hill and Rota &ndash; separate themselves from the region&rsquo;s larger schools and compete for their own version of a regular-season crown.

The four small schools are to gather Jan. 27-28 at Alconbury to sort out their title chase, and thanks to Saturday&rsquo;s victory, the home team will enjoy a 1-0 small-schools conference record going in. The Dragons are to play their second conference game against Brussels at that meeting.

Kahlil Williams, who grabbed a game-high 14 rebounds on Friday, tied Lanphear with eight on Saturday as the Dragons (1-4 overall) won their first game of the year. Brussels fell to 2-4 overall and 1-2 in the Small-Schools race.

In other boys&rsquo; games of note on Friday and Saturday:

Aviano, which survived 24 points by Mannozzi in Friday&rsquo;s 44-42 victory, got 18 points from Cory Webb on Saturday, but was held to just 10 points in each of the game&rsquo;s final three periods and fell to 5-1 overall and in Region IV. The Saints are to host Sigonella, a D-III school, on Friday and Saturday.

Naples 57, American School of Milan 14: Saturday at Naples, the Wildcats improved to 5-1, 5-1 in a game in which the idea chiefly was to hold down the score.

Nigel Alexander led the way for Naples, with 12 points, in a game in which nine Wildcats scored. Next up for Naples is a trip to Vicenza on Friday and Saturday.

Wiesbaden 59, Bitburg 42: Saturday at Bitburg, Kelsey Thomas scored 16 points to lead a trio of Warriors in double-figures. Thomas, who scored 29 points in Friday&rsquo;s 68-47 victory at home, added three steals on Saturday to help the Warriors, who got 14 points from Roscoe Johnson and 10 points from Andrew Murray, up their record to 4-2 overall and 3-1 in the region.

Patch 48, Schweinfurt 31: Saturday at Schweinfurt, the Panthers kept pace with Heidelberg and Vilseck as the school system&rsquo;s only unbeaten D-I boys&rsquo; teams with a weekend sweep of the fledgling Razorbacks.

Dylan Measells, who struck for 24 points and seven rebounds in Patch&rsquo;s 42-32 victory over Schweinfurt on Friday, again took game scoring honors, this time with 14 points to help Patch improve to 4-0 overall and in Region III.

Schweinfurt fell to 1-4 despite 11 points and five assists by Brandon Wright.