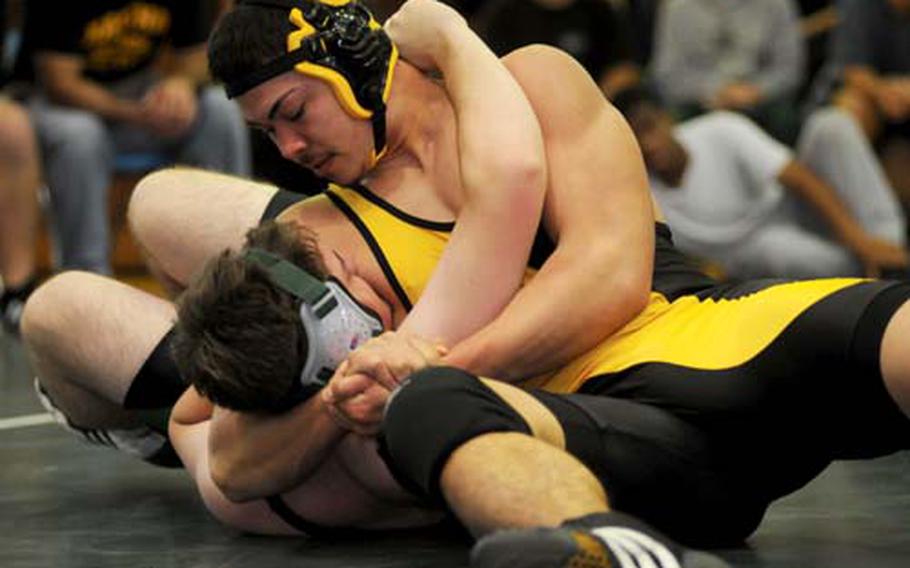 Aaron Ahner does perhaps his best work with his powerful left leg, capable of sending a soccer ball or football 70 yards in the air, a one-man field-position determiner on the gridiron and versatile playmaker on the pitch.

So, what is the Kadena Panthers&#8217; 6-foot-4 junior doing on the mat? Try a 7-3 record so far, including third-place finishes in two tournaments, with his only three defeats coming against seasoned, year-round Japanese wrestlers.

During Saturday&#8217;s Okinawa-American Friendship Tournament, Ahner sent a Japanese wrestler flying out of bounds, then from the back position wrapped his arms around a foe and wrenched him onto his back as if he were a child.

&#8220;I think there were some instances of brotherly love going on in the living room or the backyard somewhere and maybe some lamps were kicked over,&#8221; Schrock said.

That, the Ahners say, was precisely the genesis of Aaron trying the sport for the first time.

In soccer, Ahner has posted 19 goals and nine assists in two seasons in which Kadena&#8217;s gone 26-18-4. On the gridiron, Ahner had eight sacks last season, in which Kadena won the Far East Class AA title; 75 percent of his kickoffs went into the end zone or pinned opponents inside their 20-yard line. The Panthers were so dominant on offense they did not need him to attempt many field goals.

Ahner, who has lived on Okinawa all his life, has yet to attend a kicking camp in the States during summer but says he and his family are actively seeking one. Earning a college football scholarship and an NFL career are front and center in Ahner&#8217;s dreams, he said.

&#8220;He has definite Division I leg strength,&#8221; Schrock said. &#8220;He just needs to focus and continue training and practice. All aspects of the game have to come together, his mental and psychological approach combined with his physical attributes.&#8221;