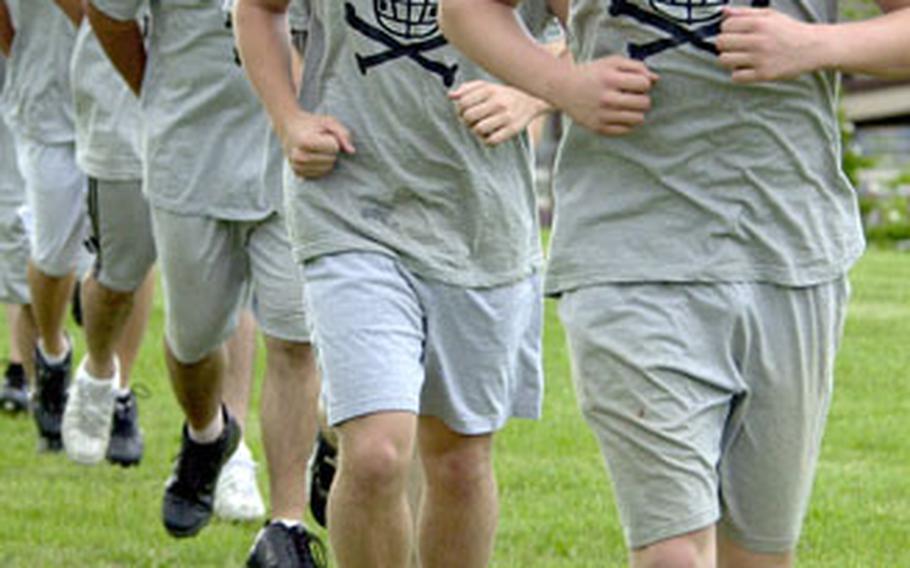 OSAN AIR BASE, South Korea &#8212; A conga line of freshman, sophomore and junior boys in gray gym shorts and T-shirts made their way around a grassy knoll behind Osan American High School, under coaches&#8217; watchful eyes.

Their demeanor remained calm. Yet each exuded the focus of someone who remembered his school accomplishing something special last fall &#8212; and wanting to prepare to do it again.

The Cougars are the defending Far East Class A football champions. And coach Tony Alvarado isn&#8217;t content to settle for beating his small-school foe, Taegu American, during the regular season and a possible rematch against Robert D. Edgren in the Class A title clash, which Osan won 16-14 on Nov.5.

Alvarado said he wants for the first time to beat Seoul American all three times they play next fall. &#8220;The goal is to be perfect.&#8221;

So he&#8217;s gathered his troops the past few weeks at a hilly, grassy patch behind the school&#8217;s tennis courts. There, he and his coaches put the players through rigorous conditioning. He has more numbers this year than in past &#8212; 26 players were at Friday&#8217;s workouts &#8212; but said, &#8220;Every year, we try to increase our conditioning.

&#8220;Where it shows is in the second half of games. And it definitely shows. Instead of worrying that they&#8217;re tired, their arms hurt and whether they can make a play, it should be how we can take advantage of another team&#8217;s fatigue.&#8221;

Such is the case at almost every other Department of Defense Dependents Schools-Pacific high school. Some workouts are official, with coaching staffs educating players on offenses, defenses, fundamentals, strength and conditioning. Others are unofficial; captains run workouts and coaches observe from a distance.

And with Far East Class AA and Class A championships at stake, there&#8217;s more of a sense of urgency to prepare for the fall.

Some 60 players showed up for Kubasaki&#8217;s two-week spring program; an average of 25 for Osan.

Alvarado said he believes his current group holds a distinct advantage over last year, when &#8220;we were teaching so many fundamentals. This year, we have so many coming back &#8230; we can take the next step up.&#8221;

Being Class A champions is a double-edged sword for the Cougars, he said. &#8220;Last year&#8217;s game, the spirit and the support brought some excitement&#8221; to the school and has increased student interest. &#8220;They want to experience what those kids experienced.&#8221;

But Bales must replace athletes such as transfer David Motu and graduates Steven Thompson and Steven Ellis. Said Bales: &#8220;We hope to have new faces off the plane come August.&#8221;

He and his coaching staff of Jon Fick, Butch Spain and Jeremy Walker put the Dragons players through similarly rigorous workouts &#8212; a &#8220;beginning process,&#8221; Bales said. &#8220;We have to do the same thing we do every year: Take the guys who show up, build a coaching staff and get after it.&#8221;

Like Alvarado but on a much larger scale, with seven DODDS-Pacific schools shooting for a Class AA crown, Bales said he welcomes the notion that the playoffs will give Pacific football a new edge. &#8220;Until then, we still have to work,&#8221; he said. &#8220;But we discovered there are some good, steady programs out there. That can only make us better.&#8221;