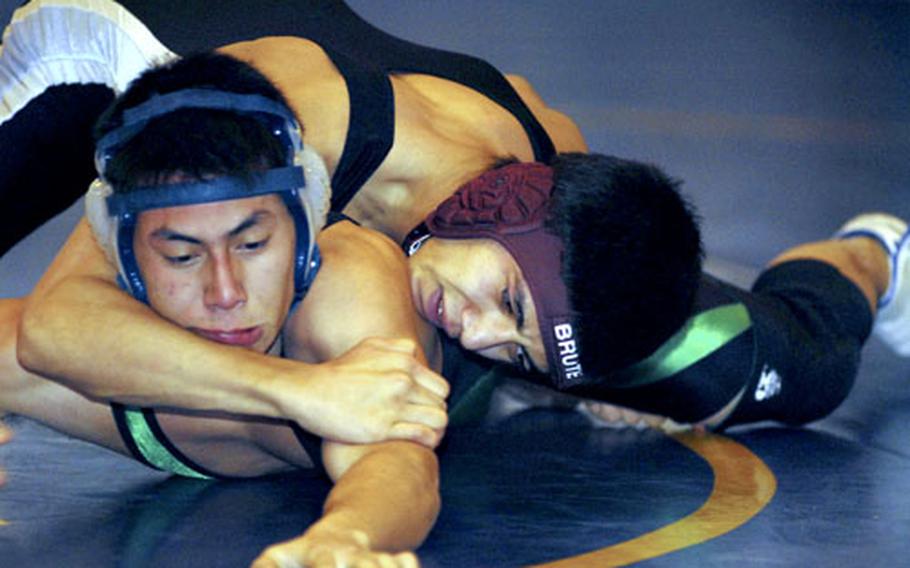 But look at them now.

Twenty-five athletes show up daily for practice; the school fields an almost-full varsity lineup. Coach Bill Riggs is a well-versed, 20-year veteran of DODDS and the sport.

Crowds of 400-plus came to watch; the cheerleaders came to cheer. Concession stands sold everything from burgers to team sweatshirts.

Said junior 158-pounder Clinton Kim, a transfer from Seoul this season, &#8220;We have our first wins, which are definitely something we can build on.&#8221;

Evelyn Jones, mother of sophomore 141-pounder holdover Greg Jones, said, &#8220;There&#8217;s more spirit; we have a better quality of wrestler; the coach is great; the focus is more on wrestling than playing around.&#8221;

The school there closed in June.

Riggs has recruited wrestlers in school hallways and always keeps his door open for athletes wanting to discuss the sport or just get a bottle of water or fruit.

Returning wrestlers such as Jones and Davenport, plus four transfers, including Kim from Seoul American, have been instrumental in working with the 7th and 8th graders who wrestle exhibition bouts. &#8220;Building the future, that&#8217;s a key,&#8221; Riggs said.

The Warriors lose only one wrestler to graduation, Riggs said. &#8220;If we keep going next year, we can fill every weight class. I want it to where when Taegu is coming, they know they have a fight on their hands.&#8221;