After late start, track athletes off and running 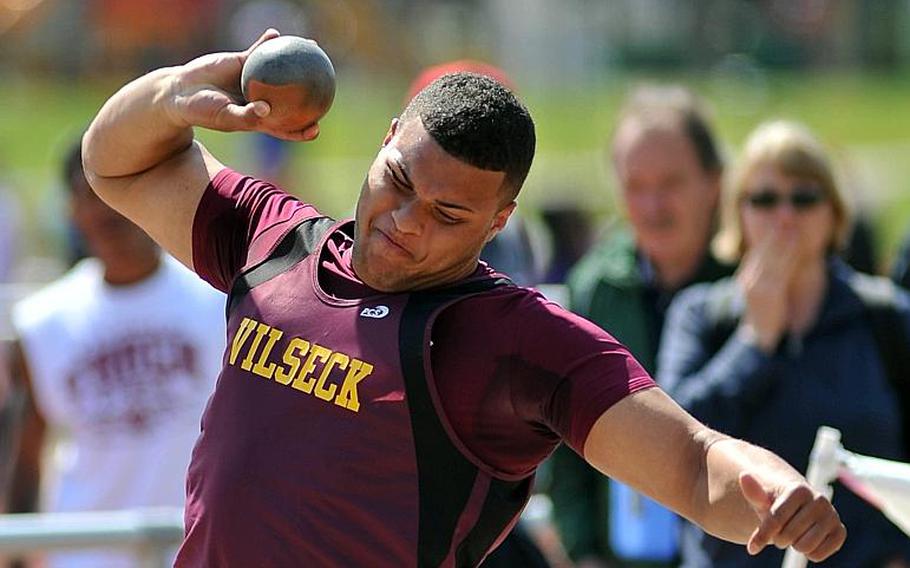 Vilseck's Armando Saldana won the shot put event at last year's DODDS-Europe track and field championships with a toss of 43 feet, 2 inches. He will return for the Falcons this season as he tries to defend his title. (Michael Abrams/Stars and Stripes)

Vilseck's Armando Saldana won the shot put event at last year's DODDS-Europe track and field championships with a toss of 43 feet, 2 inches. He will return for the Falcons this season as he tries to defend his title. (Michael Abrams/Stars and Stripes) 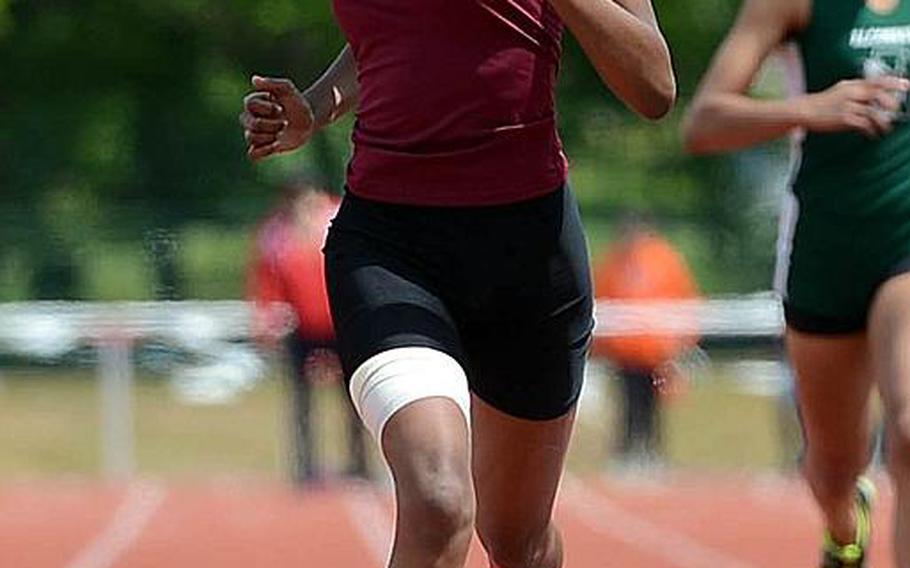 Vilseck's Bianca Walker won the 400-meter race in 59.64 seconds at the 2013 DODDS-Europe track and field championships. Walker returns for the Falcons this season. (Michael Abrams/Stars and Stripes) 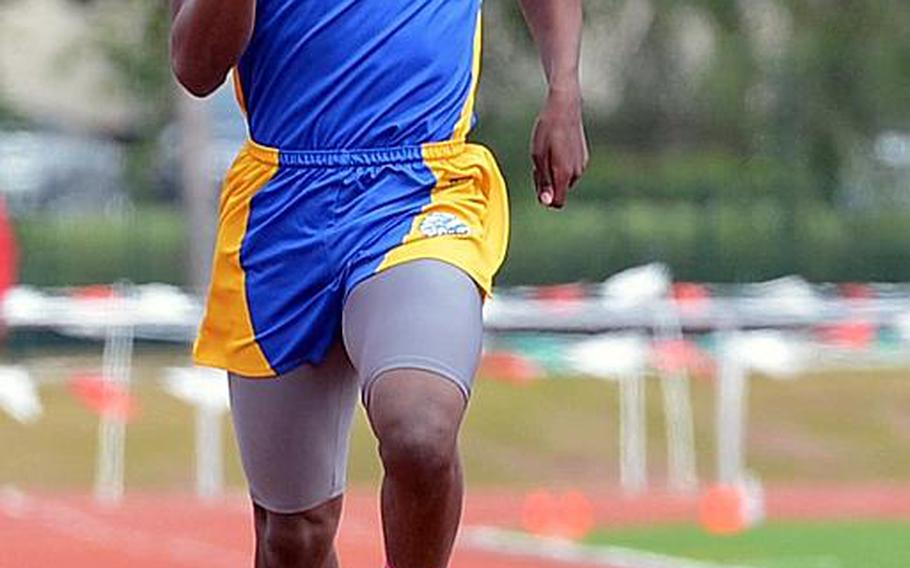 Wiesbaden's Anthony Little won the 200-meter race at the DODDS-Europe track and field championships last year in 22.62 seconds. Little also won the 100-meter race in 10.92 seconds, and will attempt to defend his titles as the 2014 track and field season gets under way this weekend. (Michael Abrams/Stars and Stripes) 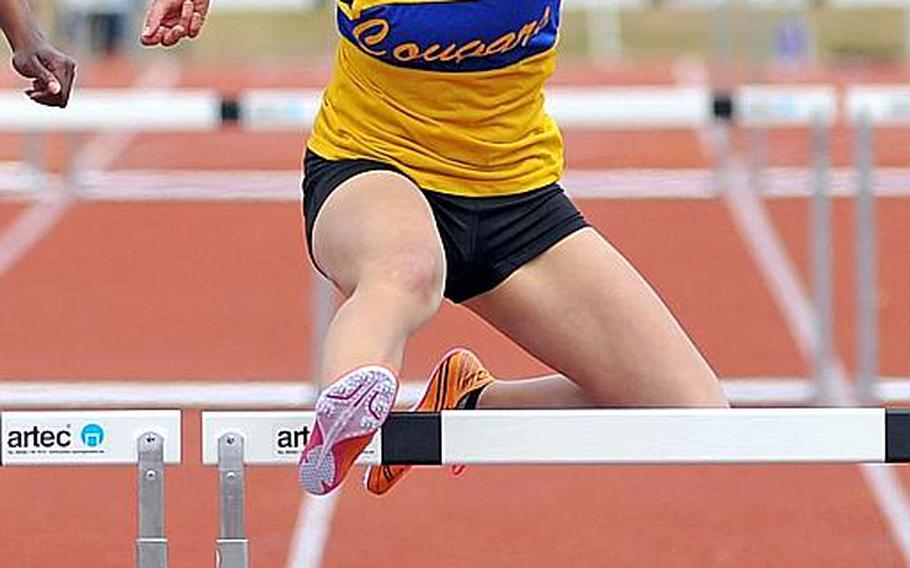 Ansbach's Mykala Bazen clears the last hurdle in the 300-meter hurdle race at the DODDS-Europe track and field championships last year to win in 47.96 seconds. Bazen will be returning for the Cougars when the 2014 season gets under way this weekend. (Michael Abrams/Stars and Stripes) 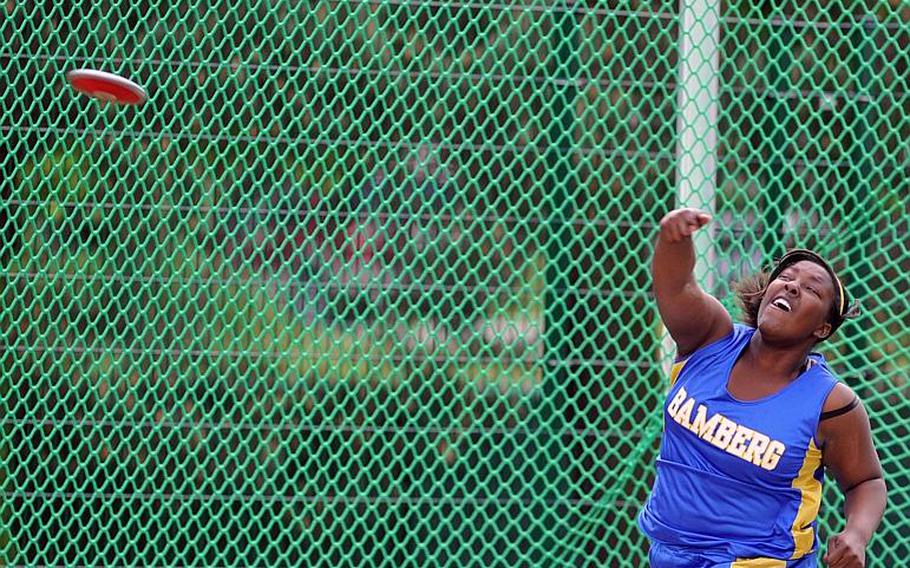 Domonique Lamons of Bamberg won the discus event at the 2013 DODDS-Europe track and field championships with a throw of 109 feet, 8 inches. She will be returning for the Barons when the 2014 season gets under way this weekend. (Michael Abrams/Stars and Stripes)

With winter weather at its heels and spring break veering into its lane, the DODDS-Europe track and field season has always been unorthodox.

Whether this year’s season is more or less unorthodox is a matter of perspective.

On Saturday, about a month after fellow spring sports soccer, baseball and softball started, the runners, jumpers and strongpeople of DODDS-Europe track and field open their regular-season schedule. The opening-weekend slate finds 22 schools in action across four sites, namely Brussels, Vicenza, Vilseck and Wiesbaden.

In years past, DODDS-Europe’s track schedule had the regular season begin before spring break. That led to athletes spending the early spring preparing for the season, competing in a meet, then shifting back into preparation mode for two more weekends.

This season will be different. Track, like nearly every other DODDS-Europe sport, has seen its schedule streamlined. The regular season has been pared from six meets to five, which will play out over the next five consecutive weekends, an uninterrupted straightaway to the European championship meet set for May 23-24 at Kaiserslautern.

Coaches are largely in favor of the change.

“We used the first meet in years past as a glorified time trial,” Wiesbaden coach Larry Chavez said.

Vilseck coach Eric Mead said he’s a fan of the new schedule, explaining that “often the weather was not cooperative for a track and field meet” in late March.

Ramstein coach William Buckley likes the change for another reason.

“We have had more time to work on the technical side of running with the long practice season before we actually compete,” Buckley said. “The biggest thing it did for us is prevent injuries, because we were able to train more evenly than in past years.”

Aviano coach Meghan Sindelar, meanwhile, said the delayed start to the season has her athletes “motivated and excited to get started,” adding that the lack of a regular-season intermission will allow her to “see vast improvements week-to-week.”

But not every team was willing to wait. Bitburg, for example, hosted AFNORTH and Baumholder in a preseason meet in late March, the same weekend the regular season might have started under the former scheduling arrangement.

“A month and a half would have been too long to wait for a meet,” Barons coach Brian Bent said.

While most DODDS-Europe coaches are either enjoying or working around the new schedule, others are confronting their own unique challenges. AFNORTH coach D.C. McDonald pointed out that his school’s spring break runs from April 14 through April 25, overlapping with the first two weeks of the track regular season.

“That puts us at a huge disadvantage, because most of my kids will be gone on vacation,” McDonald said, adding that he’ll likely have to “start over with training” once his charges are back on the track from their long respite.

Regardless of when or in what condition they’ll arrive at the starting line, DODDS-Europe’s track athletes are all pointed toward one goal: a European championship.

At the team level, Division I is a crowded mix of contenders looking to unseat boys champion Wiesbaden and girls champion Patch.

The Warriors are a candidate to keep their boys crown and vie for the girls title, too. Chavez returns more than 50 varsity athletes between the two teams, including Anthony Little, dubbed the fastest man in DODDS-Europe after sweeping the 100- and 200-meter sprints at last year’s championships.

Ramstein could also make a run at a double team title after the Royal girls finished second and the boys finished third last year. Returning speedsters Gregory Desulme and D’Miya Thornton rank among the program’s best shots at individual and/or team titles.

Kaiserslautern and Vilseck are also in range to contend.

The smaller-school picture is less straightforward.

Both of last year’s Division III champions, the Alconbury girls and Baumholder boys, have moved up to Division II, making that already-crowded leaderboard all the more competitive. The reigning champion Bitburg boys and Ansbach girls will seek to defend their turf.

The promotion of Alconbury, Baumholder and Rota to Division II leaves the Division III ranks slighter than ever. Bamberg, Brussels, Menwith Hill and Schweinfurt are the only three Division III schools fielding teams; if all four programs manage to qualify athletes for the European tournament, DODDS-Europe athletic director Karen Seadore said, then a Division III team champion will be crowned.