AFNORTH senior running back Miller gives Lions his all 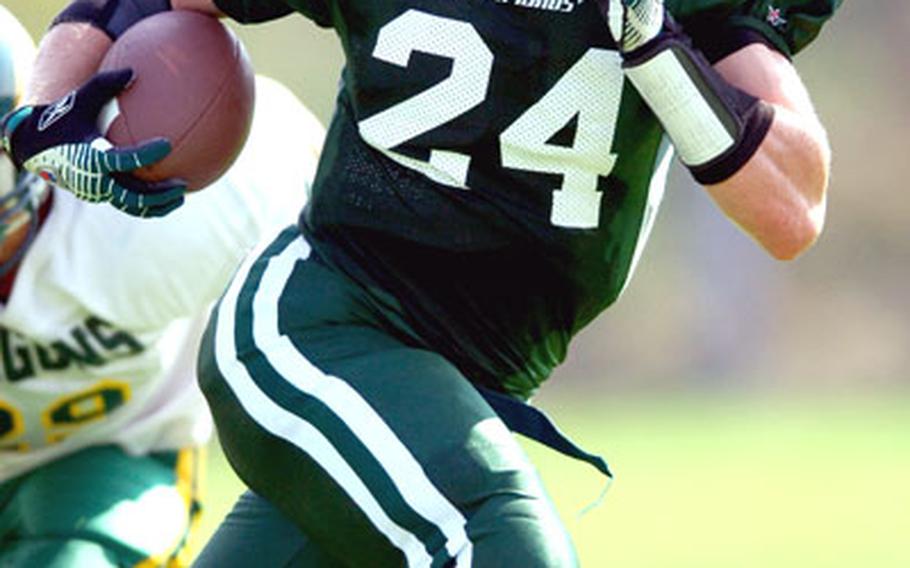 AFNORTH senior running back Sascha Miller rambles for some of his 236 yards rushing in a 41-6 victory over Alconbury in Brunssum, Netherlands, on Sept. 23. (Photo courtesy of Dennis Owens)

There&#8217;s a reason why AFNORTH senior running back Sascha Miller is averaging more than 16 yards per carry this season.

Miller, who was co-MVP among running backs at the George-run DODDS-Europe football camp in August, has always been determined. But personnel changes at AFNORTH deepened that work ethic, according to his coach, Greg Blankenship.

Miller, who played fullback last year, was told that if he was going to replace All-Europe tailback Jared Waters as the main ball carrier, he&#8217;d have to improve his speed and his strength.

His reaction was characteristic.

&#8220;He began lifting weights five nights a week,&#8221; Blankenship said by telephone Thursday, &#8220;and working out with Strength Shoes,&#8221; a sometimes-controversial shoe that eliminates the heel in supporting the body&#8217;s weight.

&#8220;I&#8217;m not advocating Strength Shoes, but between the weight training and shoes, he became stronger, faster and quicker than Jared was.&#8221;

That chance probably was lost when Miller, who also plays middle linebacker, had two players roll up on his ankle while he was on defense in AFNORTH&#8217;s victory over Rota on Sept. 30. Miller is expected to miss the season finale against London Central (1-3) this week and return for the playoffs.

On the field or on the bench, Miller remains dedicated to the Lions&#8217; success.

Beyond that, Miller&#8217;s pointing toward next season.

And a motivational one.

Blankenship, who has coached Miller since he arrived at AFNORTH after playing a freshman year in Las Vegas, admires his honor-student tailback for more than his physical prowess.