AFNORTH’s Palm has her sights set on shot put AFNORTH freshman Emma Palm has impressed her track coaches and teammates with her strength and technique in the shot put and discus. (Kevin Dougherty / S&S)

AFNORTH freshman Emma Palm has impressed her track coaches and teammates with her strength and technique in the shot put and discus. (Kevin Dougherty / S&S) 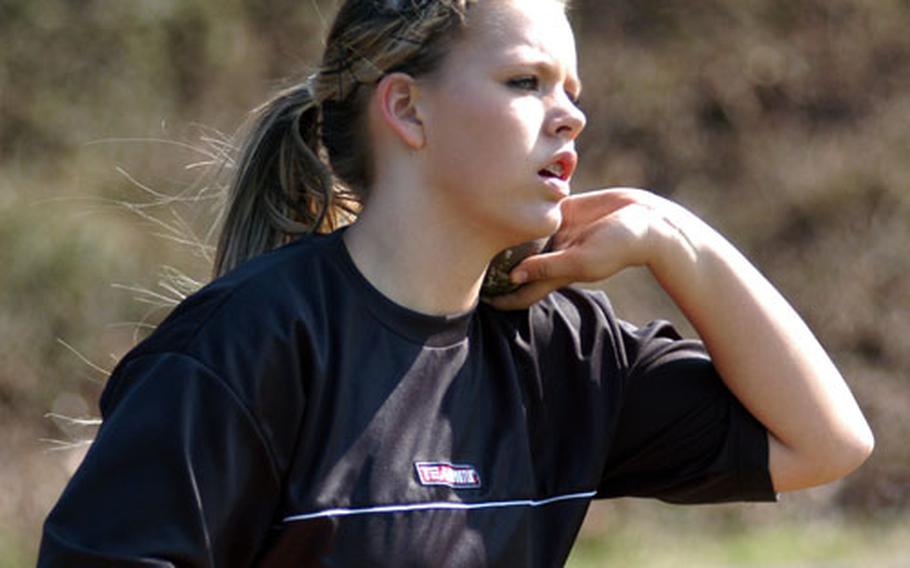 Emma Palm, shown here at a recent practice, holds a Swedish national age-group record in the shot put and is well versed in throwing the javelin, a discipline she wishes was part of the DODDS track and field program. (Kevin Dougherty / S&S)

BRUNSSUM, Netherlands &#8212; For AFNORTH sports, the surprise of the spring season may well be a sweet-throwing southpaw from the south of Sweden.

The catch is you won&#8217;t find the freshman standing atop a softball mound.

Emma Palm does throw a ball for her team, only it&#8217;s a metal orb that weighs considerably more than the white leather variety with red seams.

Palm is a shot-putter, and a talented one at that.

Last weekend, at a Division III meet in Brussels, Belgium, she tossed an 8-pound shot 28 feet, 9&#8201;&#189; inches. That was more than enough to automatically qualify for the DODDS-Europe Track and Field Championship in late May. Remarkably, it was only her second high school meet.

McDonald is also optimistic. The coach believes his AFNORTH track team may be on the cusp of something great after years of mediocrity.

Despite having a green team &#8212; four of the five female shot-putters are freshmen, for example &#8212; McDonald expects to do well at this year&#8217;s European championship in three weeks. Beyond this season, the future looks even brighter to him.

Freshman sprinter Sharaud Gallman will pace the boys, while the girls&#8217; 4x100- and 4x400-meter relay squads are stocked with freshmen and sophomores. And next year&#8217;s crop of eighth-graders, led by Tony Legare, has McDonald rubbing his hands in anticipation.

But perhaps the most intriguing member of them all is Palm, the daughter of a Swedish telephone executive.

The 14-year-old freshman was born and raised in the small town of Fj&#228;r&#229;s on the southwest coast of Sweden, south of G&#246;teborg, the country&#8217;s second largest city. It&#8217;s an area of pristine beauty, with shimmering lakes, breathtaking vistas and remarkable relics from the Bronze Age to the Vikings.

At an early age, Palm learned to throw the shot put and javelin from her dad and grandfather, who preceded her in the sport. Palm, who also belonged to a track club, took to the javelin and shot immediately, winning junior-level competitions.

Though only a freshman, she isn&#8217;t shy about tossing pointers to a teammate. And Palm seems equally receptive to suggestions on how to improve her throwing, including the discus.

But what she would really like to throw is the javelin, which holds a special place in Norse mythology as well as her heart. DODDS track meets do not include that event.

You can tell she misses the runway, or throwing area. Back in Sweden, when she was 12, Palm threw a javelin 31.33 meters. She routinely scored well in competitions.