Acker surprised even herself with 3 straight titles 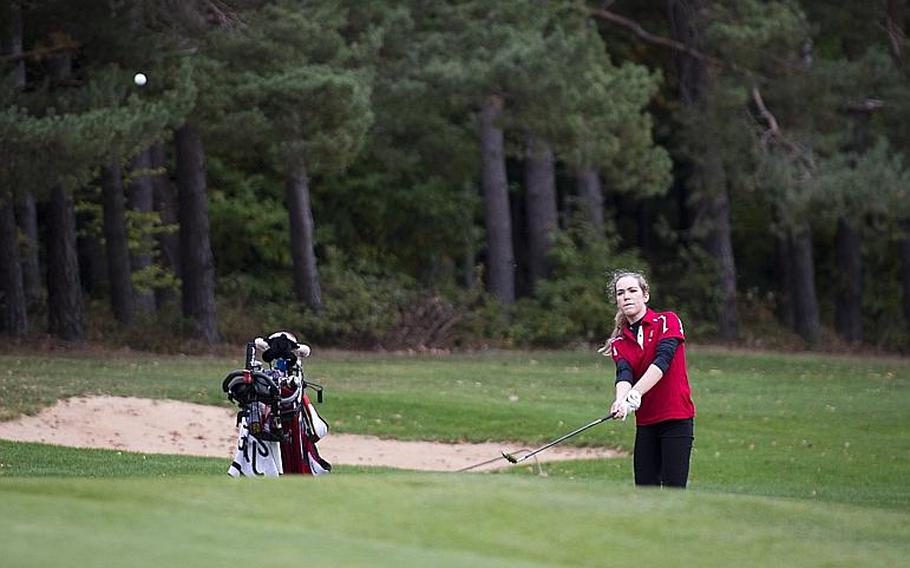 Kaiserslautern's Jasmin Acker chips a shot to the green during the DODEA-Europe golf championship at Rheinblick golf course in Wiesbaden, Germany, on Friday, Oct. 13, 2017. (Michael B. Keller/Stars and Stripes)

Along with its drives, chips and putts, Kaiserslautern senior Jasmin Acker has become proficient at the mental aspect of golf.

Acker plays with a remarkable blend of intensity and affability. She makes note of her own mistakes, but treats each new tee shot as a fresh opportunity. She responds fiercely to competition, but is endlessly complimentary of her beaten opponents and genuinely flustered when her success is recognized.

And there’s a lot of success to be recognized. This fall, Acker won her third consecutive DODEA-Europe girls golf championship, and now is the Stars and Stripes girls golf Athlete of the Year for the third straight year.

True to form, Acker had a few gentle critiques of her own performance even as she celebrated her latest achievement.

““There were a few things that could have been better,” Acker said. “There are a few putts that I definitely should have made.

Complaints would only undermine the steady optimism she’s cultivated on the course, which fueled her triumphant send-off this fall.

“I felt really comfortable,” Acker said. “I wasn’t stressed or anything.”

It helps that Acker has competed on a clearly higher level than the rest of the DODEA-Europe field for the last two seasons, representing the second half of her high school career.

As a freshman, Acker made a promising debut at the European tournament but fell well short of Wiesbaden’s Jenna Eidem as the senior claimed the fourth and final title of her reign.

Acker wasn’t a clear favorite as a sophomore, instead engaged in an evenly matched standoff with Bitburg rival Leigha Daryanani that started with a duel for second place the year before. But Acker earned a four-point win for her first European title, and followed that up with runaway wins as a junior and senior. Acker won this year’s championship by a 19-point margin.

Looking back over her career, Acker found it hard to believe that that promising freshman had turned into a dominant champion.

“I didn’t think I’d do this three times,” Acker said. “I’m happy that I got to finish it off like that.”