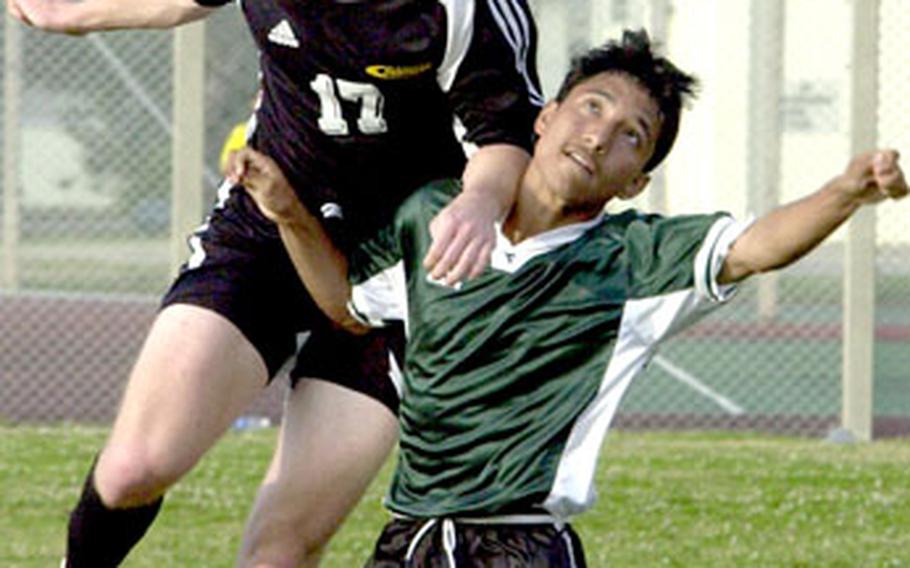 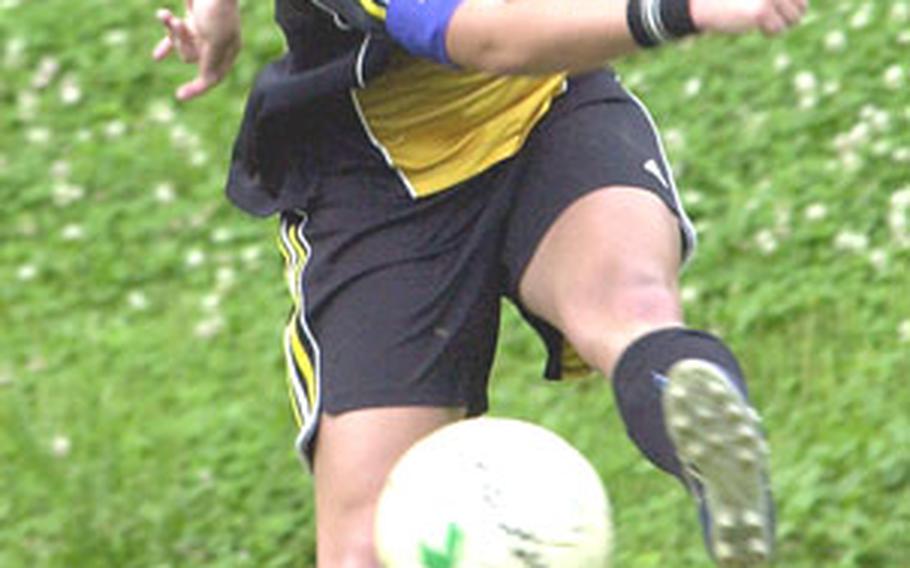 Dianne and Jennifer Abel&#8217;s contributions to their team&#8217;s success were easily discernible on the stat sheet: they combined for 131 goals and 78 assists as Kadena won its third straight Far East Girls Class AA soccer title.

Nathan LaGrave&#8217;s contributions weren&#8217;t as apparent but coaches Michael Callahan and John Reay said they were no less important. LaGrave played and shone wherever needed in leading the Panthers to their third Class AA boys title in four years.

As a result, the three Kadena black-and-gold stars share Stars and Stripes Athlete of the Quarter honors for the 2006 Pacific high school spring sports season.

Besides sharing the team captaincy and spearheading the offense, the Abels are solid students and role models for the team, Nguyen said, leaders who also listen, strive constantly to improve their game and elevate their teammates&#8217; level of play.

LaGrave mustered only 11 goals and 10 assists. But his ability to lead, distribute the ball and coach on the field provided the ultimate boost to the team, his coaches said.

LaGrave now will move on to Division I Bucknell, where he&#8217;ll play soccer on a partial scholarship. Dianne Abel also will play Division I soccer, at Winthrop, with her former Kubasaki arch-rival and best friend Erin Foote. Jennifer Abel will return next season in possession of the Pacific record for goals in a season (70) and 109 career goals.

Program of the quarter: Besides soccer, Kadena baseball won the Okinawa Activities Council season series 3-2 over Kubasaki, while girls softball swept Kubasaki 5-0. The boys track team won the OAC district title, then scored 143 points and eight gold medals in the Kanto Plain Association of Secondary Schools meet. The only island titles Kadena failed to win were golf and girls track and field.

Most improved team/softball game of the quarter: Taegu American unseated two-time defending DODDS-Korea champ Seoul American for the league title. Taegu rallied from a 4-1 deficit to down the Falcons 10-4 on April 29 at Yongsan Garrison, giving the Warriors their school-best 10th victory of the season.

Soccer players of the quarter: Besides LaGrave and Monroy, Stefan Welch of Yokota led the region among boys with 32 assists while Seoul Foreign striker Remco Rademaker paced the Pacific with 34 goals. Best brother-sister duo: the Pierponts, Ronnie and Ashley, of International Christian-Pyongtaek, who combined for 53 goals.

Soccer match/shot of the quarter: Gina Bosworth could have won the Girls Class A championship match with a penalty kick in overtime but missed. She made the most of her second chance during the penalty-kick shootout as Osan American edged Robert D. Edgren 3-2 in May 19&#8217;s final on muddy, sloppy Penny Lake Field at Iwakuni Marine Corps Air Station, Japan.

Baseball player/play/game of the quarter: Senior first baseman and team captain Chris Kaneshiro batted .400 this season and hit his only home run when it mattered most: a two-run walk-off blast in the bottom of the seventh that rallied Kadena over Kubasaki 6-5, the Panthers&#8217; third straight victory over the Dragons after opening the OAC season with two losses.

Softball player of the quarter: Freshman right-hander Ashley Smith served as an integral part of a Pusan American team that finished a school-best 8-7 in its final season (the school closes this month). Smith went 7-5 with a 3.06 ERA, allowing 36 hits and 50 walks while striking out 79 of 259 batters faced in 53 innings. At the plate, she batted .323 with 20 stolen bases. The 4.0 GPA student is president of Pusan American&#8217;s National Junior Honor Society.

Track and field athletes of the quarter: Having five athletes on one team who shine equally is rare. Kadena&#8217;s boys could claim such a group in sprinters Manuel Duran and Jeff Morton, distance runner Tim Nabonne, field specialist Marquis Newton and hurdles and discus star Eric Robinson. They regularly turned events such as the OAC district, Kanto Plain and Mike Petty Memorial meets into Panther runaways.

Best new event: Few things had so many people talking &#8212; and laughing &#8212; as much as the new &#8220;Throwers&#8217; Relays&#8221; in the Mike Petty track meet on April 8 at Kubasaki. Discus throwers and shot putters banded together to see which ones could negotiate the 400-meter relay the fastest.

Spring Athlete of the Quarter nominees