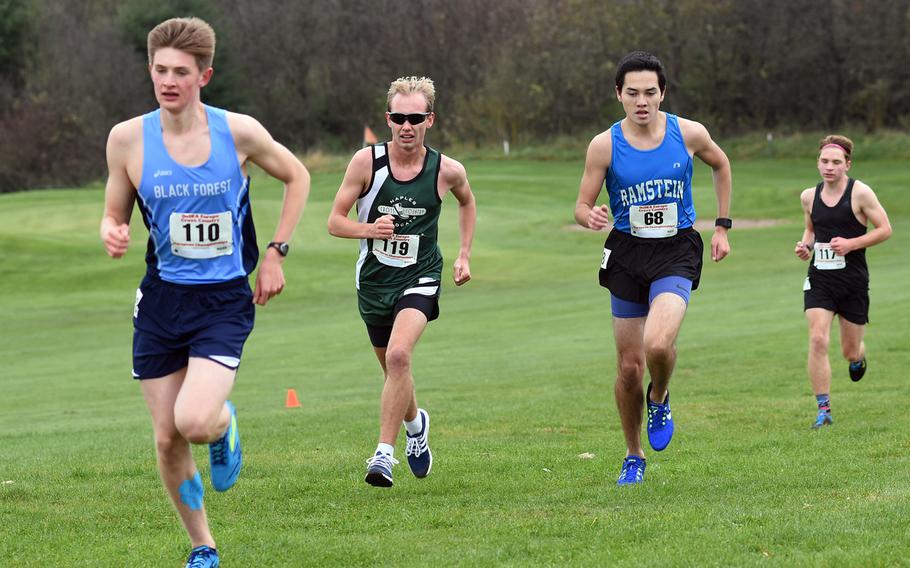 Naples' Daniel Aleksandersen, Ramstein's Jose Serrano and Stuttgart's Paul Fullwood were in hot pursuit of front-runner and eventual winner Mac Roberts of Black Forest Academy during the Department of Defense Education Activity's European cross country championships on Saturday, Oct. 28, 2017, in Baumholder, Germany. Roberts is back this fall to defend his title. (Jennifer H. Svan/Stars and Stripes)

Naples' Daniel Aleksandersen, Ramstein's Jose Serrano and Stuttgart's Paul Fullwood were in hot pursuit of front-runner and eventual winner Mac Roberts of Black Forest Academy during the Department of Defense Education Activity's European cross country championships on Saturday, Oct. 28, 2017, in Baumholder, Germany. Roberts is back this fall to defend his title. (Jennifer H. Svan/Stars and Stripes) 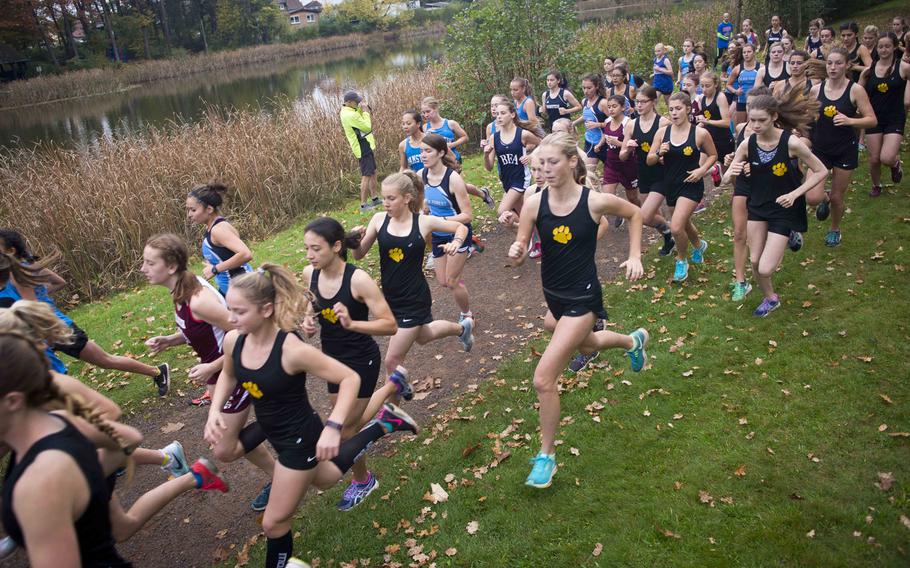 Runners take off from the starting line during a cross country meet in Ramstein-Miesenbach, Germany, on Saturday, Oct. 21, 2017. (Michael B. Keller/Stars and Stripes)

But they’ll have more than each other to contend with.

Several standouts from international schools and smaller DODEA-Europe programs are strong candidates to run away with DODEA-Europe’s individual titles when the European finals take place Oct. 27 at Baumholder, Germany. Preparations for that defining event ramp up Saturday as the DODEA-Europe regular season opens with five scheduled meets.

Boys Mac Roberts of Black Forest Academy is back to defend his title this fall, headlining a Falcons squad that is the reigning Division II European team champion. Roberts claimed his crown last fall with a time of 16 minutes, 48 seconds, setting a high bar both for his own repeat bid and his many pursuers.

While Roberts is a favorite to repeat, the Division I team race is less clear.

Regardless, the Raiders will make their move on Ramstein behind a deep roster of strong performers, including 2017 sixth-place finisher Joseph Purvis. He’s one of four returning Kaiserslautern runners to crack last year’s European top 20, and that experienced core could make the math work in the Raiders’ favor in the season’s decisive meet.

Stuttgart, Naples and Lakenheath rounded out the Division I top five in 2017, and each will be heard from again this fall as the large-school race sorts itself out.

Among small schools, Baumholder returns four of its top five runners from a squad that finished second to annual powerhouse Hohenfels in last year’s Division III team competition. Senior Jesse Espinoza leads the Bucs’ efforts at knocking off the Tigers.

Girls St. John’s International School has come to dominate the girls’ side of DODEA-Europe cross country in recent seasons, primarily behind the efforts of three-time European individual champion Kayla Smith. While Smith has moved on to the next phase of her career, her alma mater has plenty of potential champions lined up to take her place.

Perennial contender Holly Moser of SHAPE is back for another shot at the crown after finishing third last fall. She’ll lead the Spartans’ efforts at ousting reigning champion Stuttgart from the top team spot after finishing second to the Panthers a year ago.

Black Forest, meanwhile, has a chance at an individual sweep with 2017 fifth-place finisher Bianca Liberti back on the course.