3rd Force, Base get off to strong starts 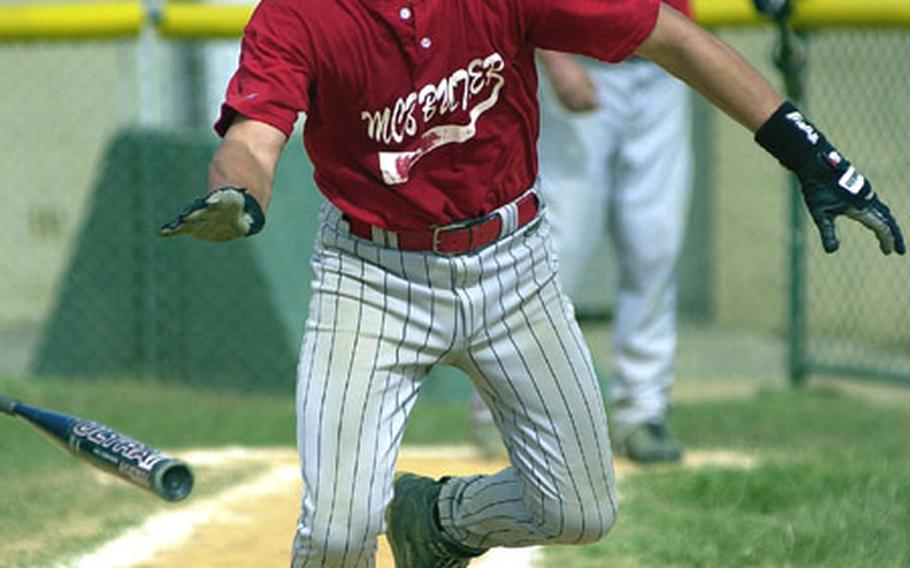 It was bad enough losing a two-game final in 2001 after going unbeaten all week. But last year, 3rd Force stumbled to a 1-5 round-robin mark, then was eliminated four games into the regional playoffs.

Led by slugger Tim Callahan, 3rd Force topped U.S. Naval Hospital Camp Lester 12-6, then rallied past 3rd Marine Division/Expeditionary Force 14-7. Callahan went 4-for-7 with two homers, a triple and six RBIs on the day, and Lee Burkett was 5-for-7 with four RBIs.

Going into the tournament, much of the talk revolved around 3rd Force, which in addition to Callahan boasts former All-Marine outfielder Gary Chaney. Some observers called 3rd Force the team to beat.

Hammond dismissed such speculation, noting that only one game Monday ended in a double-digit victory, Base&#8217;s 13-1 victory over 1st Marine Aircraft Wing.

Likewise, Base entered the week with a bull&#8217;s-eye on its back, having won this tournament twice in the past three years.

Returning All-Marine shortstop Joe Sutter went 5-for-5 on the day with a homer, a double, a sacrifice fly and three RBIs to boost Base to two victories, 13-1 over 1st Marine Aircraft Wing and 18-13 over Hospital.

Coach Jamie Newberry said his squad is taking nothing for granted, certainly not after trailing 5-0 before rallying past a Hospital team that hasn&#8217;t won a game in this tournament in 10 years.

Led by former All-Navy and All-Marine first baseman Mel Harris, Hospital scored 19 runs in its two Monday losses after getting just 35 in eight games a year ago. Shortstop Will Myers finished the day 6-for-7 with a double, triple, sacrifice fly, two homers and eight RBIs.

Newberry agreed with Hammond&#8217;s assessment that the 2003 Marine regional title is anybody&#8217;s for the taking.

Round-robin play continues through Wednesday evening, followed by the double-elimination playoffs starting Thursday. The championship is at 8 p.m. Friday.

As well as battling for Pacific team bragging rights, players on the seven regional squads are vying for six invitations to the All-Marine tryout camp later this month at Cherry Point Air Station, N.C.

The All-Marine team will then play in the All-Armed Forces championship Aug. 18-23 at Eglin Air Force Base, Fla.