Still no vax, Kyrie's back: Nets look to star guard for help 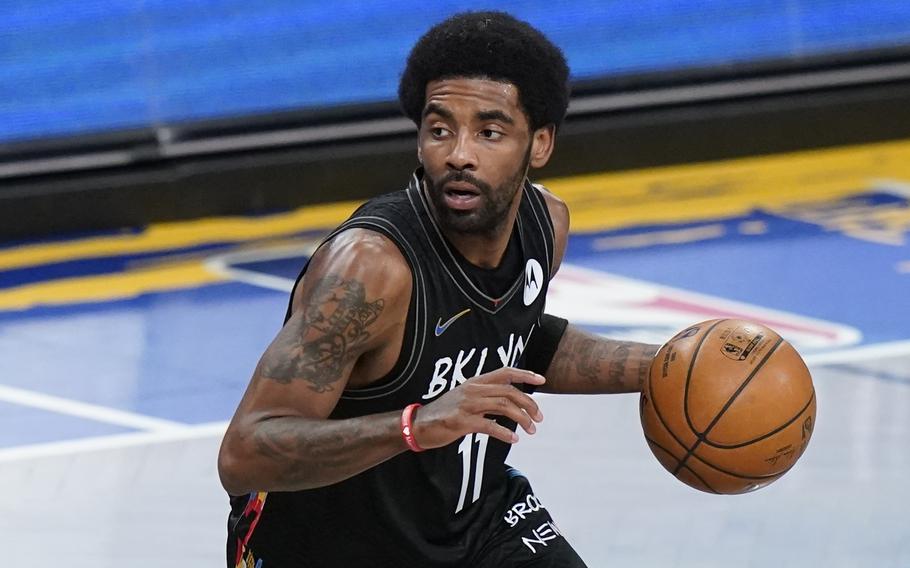 Brooklyn Nets’ Kyrie Irving moves the ball during the first half of an NBA basketball game against the Cleveland Cavaliers on May 16, 2021, in New York. Kyrie Irving will rejoin the Brooklyn Nets to play in road games. The Nets decided on Friday, Dec. 17, 2021 their point guard would practice with them and play road games, even though he remains unable to play at home because he doesn’t meet New York City’s vaccine mandate. (Frank Franklin II/AP)

NEW YORK — Kyrie Irving might be just the jolt the Brooklyn Nets need to escape a midseason slump.

It looks like they'll find out Wednesday night at Indiana.

After being held out of the team's first 35 games because he refused to get vaccinated against the coronavirus, Irving is set to make his highly anticipated season debut.

Coach Steve Nash was still finalizing plans for how the guard will be used.

"He could definitely start," Nash said after the Nets' morning shootaround. "I think he could play a full chunk of minutes. He's had three or four full-court days so I think he can play extended minutes."

Irving has been unable to play at home and for much of the season because of New York City's vaccination mandate and was unwelcome on the road. The Nets didn't want a part-time player, so sent him away during the preseason.

Things changed. Nash said with the recent COVID-19 outbreak that left the Nets severely short-handed, having the superstar part-time was a better option than signing more players to 10-day hardship contracts.

"So why not bring him back?" Nash said.

The Nets have lost three straight, all at home, and there's nothing Irving can do about the Nets' struggles in Brooklyn if he remains unvaccinated. The vaccine is mandated for New York City athletes playing in public venues. He has said refusing it was what's best for him and that he was aware there would be consequences.

But he can play in road games in the cities where there is no mandate, including all the upcoming ones during a stretch that has the Nets away for seven of their next 11 games.

As of last month, the NBA said two-thirds of players were also boosted, a figure that has likely risen in recent weeks given constant urging from the league and the National Basketball Players Association. They have pointed to the recent surge in virus-related issues as proof that boosters are absolutely critical to keeping the league going.

Unvaccinated players in the NBA are subject to almost-daily testing (the exception being off days without a game, practice or travel) and more stringent requirements, such as not being able to dine with teammates and additional social-distancing rules —even covering where their lockers can be in relation to their teammates.

"I knew the consequences," Irving said last week of his vaccination decision. "I wasn't prepared for them, by no stretch of imagination coming into the season."

Even though he just recently started practicing for the first time since training camp, the Nets are confident Irving's entrance can only be a positive.

For sure, Irving's talent is undeniable. He averaged a career-best 26.9 points last season, becoming the ninth player in NBA history to shoot at least 50% from the field, 40% from 3-point range and 90% from the free throw line.

But there's still matters of chemistry and continuity that championship clubs crave, and the Nets will be trying to establish it with essentially two teams: one on the road with Irving and one at home without him.

The Nets are banking that Irving's close relationship with Durant, along with a roster of veterans such as James Harden, LaMarcus Aldridge and Blake Griffin will smooth what could normally be a bumpy transition.

"I think that they have a mature enough group, an experienced enough group to kind of understand the dynamics of the business of basketball, along with the rules that are in place that made the situation what it is," Clippers assistant coach Brian Shaw said. "So, they'll make the most of it."

That's what the Nets were counting on when they reversed their decision last month and announced that Irving would join them for practices and road games. They were criticized for doing so — as the Australian Open has been for allowing Novak Djokovic entry with a medical exemption despite questions about whether he was vaccinated, which was supposed to be required so he could defend his title.

The Nets couldn't win without Irving last season, falling to Milwaukee in the Eastern Conference semifinals after he sprained his ankle in Game 4. It's unclear if they can win with Irving, who has a history of injuries and took a leave of absence from the team for personal reasons last season.

He's spent this one collecting a portion of his $35 million salary not to play, forfeiting checks for the games he made himself ineligible for, but getting paid for the road games the Nets barred him from. He's popped up occasionally on his social media platforms or as a spectator at Seton Hall games, but hasn't been playing against NBA competition.

There hasn't been time to get as much work as hoped when he came back, as he went into health and safety protocols on Dec. 18, the day after his return was announced.

But on a team that's showing flaws, whatever Irving can provide — whenever he can provide it — should solve some problems.

"Obviously we love to have Kyrie back. He's a special, special talent," James Harden said. "But there's things that we need to correct internally and individually that can help us, and then adding Kyrie back is going to be more special."