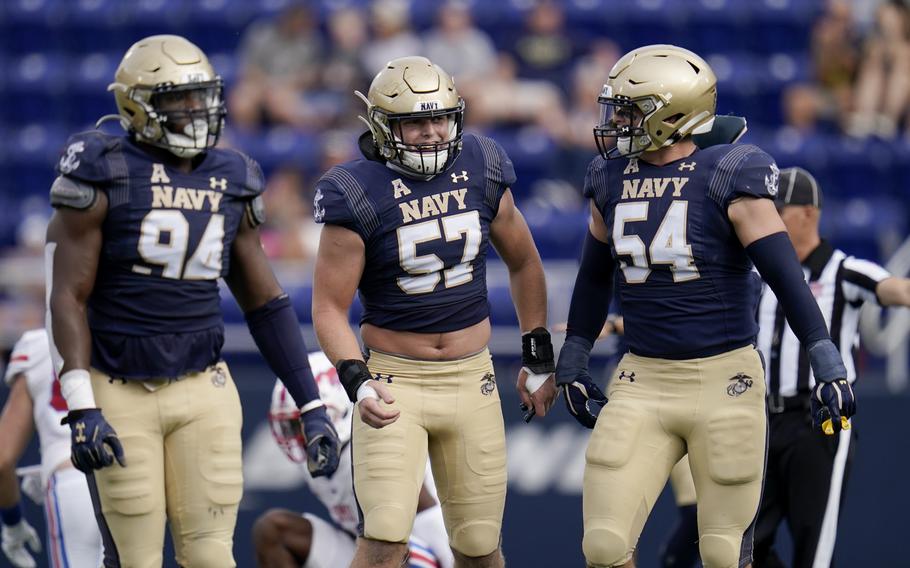 ANNAPOLIS, Md. — The last thing No. 24 SMU needed was to fall too far behind against a methodical Navy team.

The moment the Mustangs seemed like they might be in trouble, Bryan Massey turned the game around with a long kickoff return.

"I thought that gave us a little bit of momentum back," SMU coach Sonny Dykes said. "The thing I was most proud of our guys about doing, they just kept their head down, never looked at the scoreboard. We talk to them all the time about doing that."

Tanner Mordecai threw for 324 yards and two touchdowns, and the unbeaten Mustangs rallied from a 14-point second-quarter deficit to beat Navy 31-24 on Saturday. Massey's 95-yard kickoff return began the comeback, and SMU's defense held firm for most of the second half.

SMU (6-0, 2-0 American Athletic Conference) had the game tied by halftime and went up 31-24 on a 22-yard TD pass from Mordecai to Jordan Kerley with 8:19 remaining in the final quarter.

"That was heartbreaking for our young men and the program to play the 24th-ranked team here and be up 21-7," Navy coach Ken Niumatalolo said. "We were feeling pretty good about where we were at."

Mordecai now has 26 touchdown passes on the season. He also threw a 66-yarder to Reggie Roberson on fourth-and-1 to open the scoring, but Navy (1-4, 1-2) answered with the next 21 points.

Chance Warren tied the game with a 23-yard scoring run, then Tai Lavatai threw the first touchdown pass of the season for the Midshipmen, 37 yards to Kai Puailoa-Rojas on a flea-flicker.

Then a couple big turnovers went Navy's way. Mordecai was intercepted in the end zone, and later in the second quarter, he fumbled — and Diego Fagot returned that turnover 20 yards for a touchdown and a 21-7 lead.

Navy never had a chance to get comfortable, though. Massey took the ensuing kickoff all the way back for a touchdown, and then Tre Siggers scored on a 2-yard run to tie it with 1:54 left in the half.

After Kerley's catch in the end zone put the Mustangs ahead in the fourth, Navy turned the ball over on downs twice, the second time inside its own 20.

The Midshipmen have made strides since losing their first two games of the season by a combined score of 72-10. Navy's defense mostly hung tough against a dangerous offensive team, but after going up 21-7, the Midshipmen couldn't move the ball consistently.

"For the most part, their strategy was to not let us get the edge," Lavatai said. "I missed a couple of reads. I think I adjusted pretty well, but overall we have to execute better."

Navy didn't mount much of a pass rush against SMU, but the Midshipmen did became the first team with a sack against the Mustangs this season. That was on the play when Mordecai lost the ball and Navy ran it back for a touchdown.

"We kind of shot ourselves in the foot, specifically me," Mordecai said. "That fumble and the interception could have easily been avoided."

Navy cornerback Jamal Glenn was ejected for targeting in the second quarter, which didn't help matters against Mordecai and the SMU offense.

The Midshipmen have a short week. They play at Memphis on Thursday night.