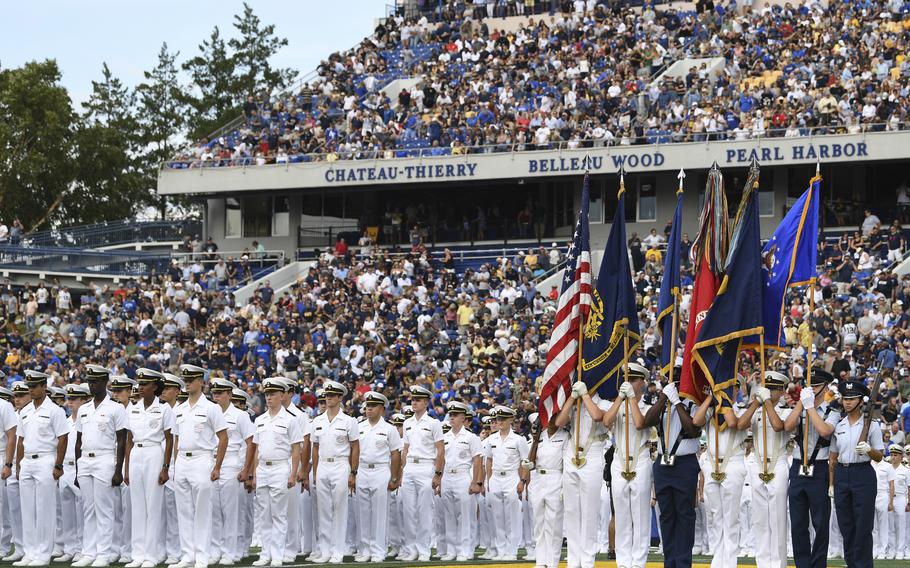 The Brigade of Midshipmen stand at attention during pre-game ceremonies before an NCAA college football game between Navy and Air Force, Saturday, Sept. 11, 2021, in Annapolis, Md. (Terrance Williams/AP)

ANNAPOLIS, Md. — No matter the result, this was going to be a special day to play football for Air Force or Navy.

Brad Roberts ran for two touchdowns and Haaziq Daniels added one, and Air Force held the Midshipmen to one first down before the fourth quarter in a 23-3 victory Saturday. The outcome always matters between these two teams — but this game was significant because the two service academies were playing on the 20th anniversary of the 9/11 terrorist attacks.

"For me, it kind of puts everything in perspective," Navy running back Chance Warren said. "I'm sitting here sour and very upset about a loss, but 20 years ago today, so many people lost loved ones. So it just kind of put it in perspective that ... I'm out here playing college football with some of my best friends, and brothers for life."

This was the earliest meeting in series history between these teams, scheduled with 9/11 in mind. The pregame pageantry felt even more meaningful than usual. The players took the field carrying American flags before the game. At halftime, the names of Navy and Air Force grads lost on 9/11 were put on the videoboard.

"I think in the big picture you come to the Air Force and Naval Academy to serve," Air Force coach Troy Calhoun said. "We'll never ever forget, not only those that perished and their families, but certainly just the remarkable, the way they answered the duty, in terms of our first responders."

Roberts ran for a 3-yard TD in the second quarter, and Daniels scored on a 28-yard run in the final minute of the third. That was plenty of offense for Air Force (2-0) on a day the Falcons held Navy (0-2) without a completed pass through the first three quarters.

"We just stayed aggressive and just played our keys and played how we could play," Air Force linebacker Demonte Meeks said. "And didn't go outside of ourselves at all. I think that was the key for us."

Roberts added another touchdown on a 2-yard run in the fourth. The Midshipmen changed quarterbacks after that, and Maasai Maynor immediately threw a 15-yard pass to Mychal Cooper for Navy's first completion and second first down of the game.

Navy finished with only 68 yards of offense.

The teams combined for 15 punts, and those plays were not mere afterthoughts. Navy's only points came after a 12-yard punt gave the Midshipmen the ball at the Air Force 38. The Falcons took over at the Navy 43 after a 19-yard punt, and that led Air Force's first touchdown.

Navy's Daniel Jones was called for roughing the punter on fourth-and-22, giving Air Force a new set of downs on the drive that ended with Daniels' TD. The Falcons made it 16-3 when a Navy snap sailed over the punter's head and out of the end zone for a safety.

Air Force: It took a while, but the Falcons finally pulled away to their second consecutive win over Navy. Air Force can wrap up the Commander-in-Chief's trophy with a victory over Army on Nov. 6.

Navy: The Midshipmen were hoping to rebound after going 3-7 last year, but they are not off to a good start. They lost their opener 49-7 to Marshall, and although this game was tight until Air Force's second touchdown, Navy's option offense did not trouble the Falcons much.

Navy: The Midshipmen are off next weekend before playing at Houston on Sept. 25.