WEST POINT, N.Y. — Christian Anderson rushed for a career-high 119 yards and passed for a touchdown and Army survived a Western Kentucky rally to take a 38-35 victory on Saturday.

Trailing 35-14 midway through the second quarter, WKU (1-1) closed the gap to seven points on Bailey Zappe’s 14-yard pass to Jerreth Sterns with just under five minutes remaining in the game. But Army (2-0) recovered a WKU onside kick and Cole Talley kicked a 31-yard field goal, giving the Black Knights the cushion they needed after the Hilltoppers scored a touchdown with 21 seconds left.

Jakobi Buchanan ran for a pair of Army touchdowns. It was Army’s first victory over WKU in four meetings since the teams’ first meeting in 2013.

Grad transfer Zappe, the nation’s leading passer last year at Houston Baptist, was 28-of-40 for 435 yards with three touchdowns and an interception. Jerreth Sterns made nine catches for a career-high 171 yards and two scores.

While WKU was dominant in the air, Army rushed for 339 yards and almost doubled the Hilltoppers in time of possession.

Jeff Monken’s 51st win at Army ties Jim Young for third all time at the academy. It was also the Black Knights’ 11th straight home win. They were unbeaten in eight games at Michie Stadium last season when only West Point personnel and the cadets were allowed to attend because of COVID-19. 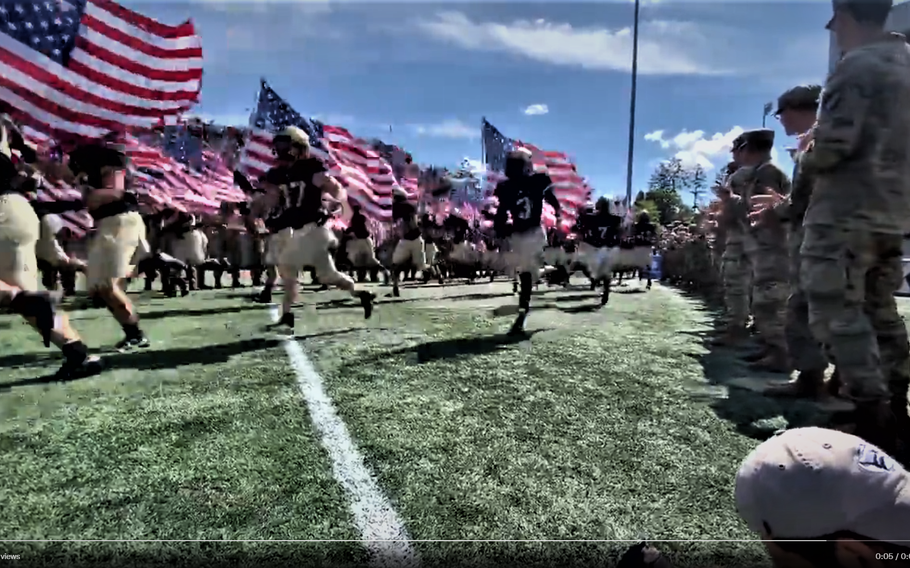 The Black Knights carry American flags onto the field at Michie Stadium ahead of their game against Western Kentucky on Saturday, Sept. 11, 2011, in West Point, N.Y. (Army Football Twitter)