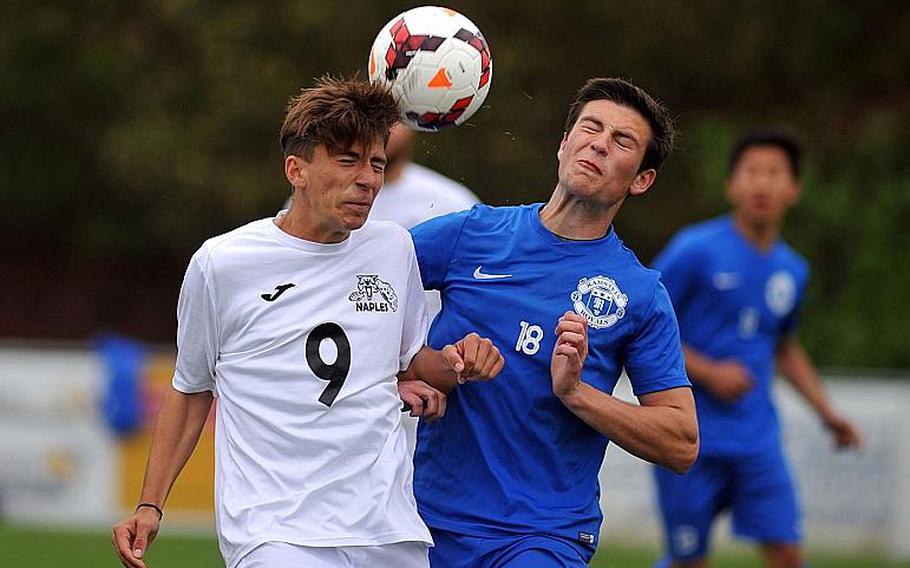 Naples' Christian Albright and Ramstein's Connor Settle go for the header in a Division I semifinal at the DODEA-Europe soccer championships in Reichenbach, Germany. Ramstein beat Naples 1-0 in overtime to advance to the final. (Michael Abrams/Stars and Stripes)

Italy takes center stage in DODEA-Europe soccer this weekend as teams converge on Aviano and Vicenza for two-day soccer events that should have a substantial impact on the Division I and II standings.

AOSR has emerged as the early favorite in the Division II boys race with an unbeaten record featuring a 5-3 win over archrival and defending European champion Marymount. The Marymount girls, however, have stepped in to the frontrunner role usually occupied by the school’s boys team; the MMI girls own a 3-0 record including two straight shutout victories.

Vicenza, meanwhile, welcomes Naples and German visitors Stuttgart and Vilseck for a four-school event that is becoming a staple of each DODEA-Europe season.

Friday’s opening slate features perhaps the premier game of the weekend as the Stuttgart Panthers and Naples Wildcats face off in a key girls matchup.

The Panthers, a year after losing to Wiesbaden in a stunning championship-game shootout, roared back to the Division I forefront with blowout wins of Wiesbaden and Kaiserslautern to open the season. But a 1-1 tie with Ramstein last weekend proved Stuttgart’s road back to the championship won’t be an easy one.

The Naples girls have followed a nearly identical path this spring. The Wildcats, traditionally the dominant girls program in Italy, started out that way in beating Florence and Sigonella by a combined 11-0 margin. But they faced resistance in the form of old rival Vicenza last weekend, playing the Cougars to a 1-1 tie.

The boys side of the Vicenza meet presents opportunities for all four involved teams to build some midseason momentum. All four of Vicenza, Naples, Stuttgart and Vilseck have at least one loss to their names this spring and are locked in the division’s middle tier below frontrunning Ramstein and SHAPE.