'You just run for dear life' 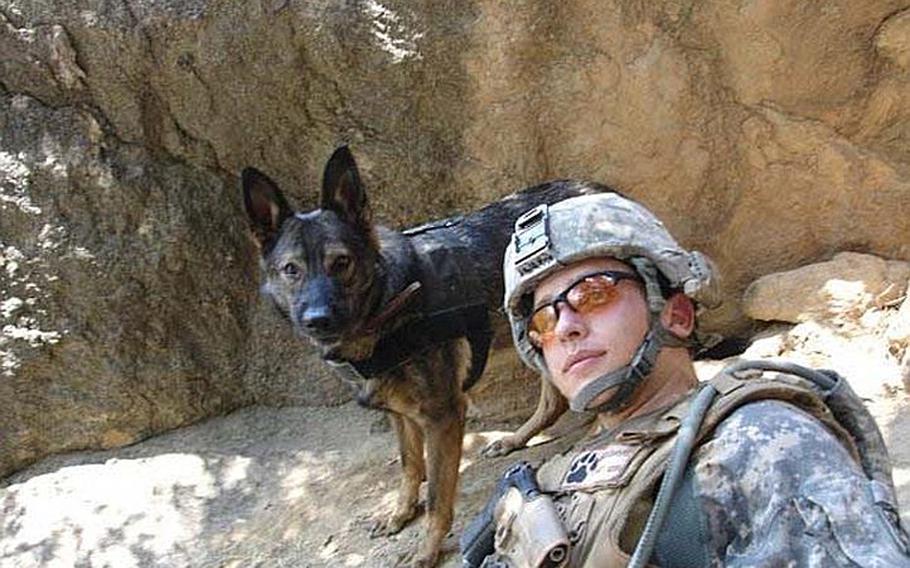 Petty Officer 1st Class Rueben Davis and his military working dog, Alva, take a rest near the village of Chapadara, where a battle unfolded during a 2009 deployment in eastern Afghanistan. (Courtesy of Reuben Davis)

Petty Officer 1st Class Rueben Davis and his military working dog, Alva, take a rest near the village of Chapadara, where a battle unfolded during a 2009 deployment in eastern Afghanistan. (Courtesy of Reuben Davis) 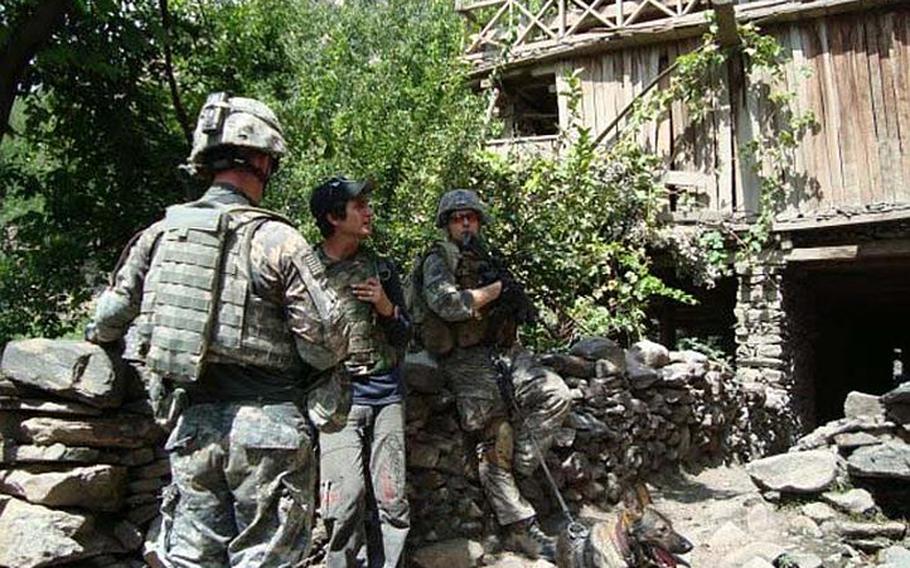 His military working dog, Alva, dragged by her leash, came tumbling after.

For a moment, his head rang from the explosion of the rocket-propelled grenade. Fluid leaked from Alva&rsquo;s concussed ears.

Enemy fire rained down from the mountains above. It was the opening of a daylong clash with the Taliban last year in the village of Chapadara in eastern Afghanistan.

&ldquo;We were taking RPGs, sniper fire and heavy machine-gun fire,&rdquo; Davis said. &ldquo;We had already gotten into some other firefights, but none where we were at a tactical disadvantage.&rdquo;

Davis and his dog were assigned to the security department at Sasebo Naval Base, a quiet installation in western Japan, when they were individually deployed to the war as an ordnance disposal team from March to November 2009.

He was awarded the Bronze Star and a combat meritorious promotion this year for his actions downrange, including suppressive fire in Chapadara that helped his unit rescue a wounded Afghan and for a separate mission when he cleared an Afghan governor&rsquo;s palace and a newly constructed girl&rsquo;s school for a visit by U.S. officials.

On June 9, 2009, his unit had helped clear the village near Jalalabad and were waiting for the others in Task Force Duke, part of Army Combined Joint Task Force 82, to link up with village elders.

Davis and Alva were used to walking point on missions and searching out bombs &mdash; and sometimes bullets &mdash; that could kill coalition troops.

The search of the village went smoothly. Then the ambush came from the mountains above.

&ldquo;The way the villages are set up,&rdquo; Davis said, &ldquo;it is impossible to always have the high ground.&rdquo;

And the high positions gave the Taliban fighters an advantage that day, as they pounded the patrol.

The ambush forced Davis and others behind some vegetation. It was just enough concealment to obscure the insurgents&rsquo; view but not enough to provide much protection.

&ldquo;If a bullet comes through the leaves, you are going to get shot,&rdquo; Davis said.

An Afghan soldier was cut down and left exposed in the open. Davis laid down suppressive fire as a U.S. medic tended to him.

Then there was the whistle and thud. A rocket detonated about 10 feet from Davis and over the cliff he went, with Alva right behind him.

&ldquo;Everything sounds like you&rsquo;re in a deep, deep hallway,&rdquo; he said. &ldquo;You can&rsquo;t stand &mdash; like somebody just sucker-punched you.&rdquo;

As Davis recovered, and the fighting waned, the patrol began a retreat through nearby wheat fields.

The soldiers were attempting to evacuate the wounded Afghan by Black Hawk helicopter when they were struck again by the Taliban fighters.

&ldquo;We stepped out into the wheat field, and you could see the wheat swept through with enemy fire,&rdquo; Davis recalled. &ldquo;You just run for dear life and hope to get to the next cover area.&rdquo;

The medevac helicopter swooped into the midst of the fighting, and the patrol directed fire on the Taliban position as the helicopter hovered over the field, hoisting the Afghan soldier up by harness.

As the enemy kept up the attack, unit medics worked to patch up the other mostly minor injuries.

Davis was sent to clear an exit through the surrounding fields. The patrol was worried about toe-popper explosives hidden in the chest-high wheat. When triggered, the small mines shoot up from the ground and explode at chest level.

&ldquo;I was basically just following my dog and praying that if she encounters any explosives she would let me know,&rdquo; Davis recounted.

&ldquo;We might have a couple minutes of quiet and then we would just get lit up from somewhere,&rdquo; he said.

Low on ammunition and water, the unit made the seven-mile return trek and linked up with another unit in Humvees.

The 15-hour mission ended in the afternoon. The unit suffered a few casualties, but no coalition members were killed.