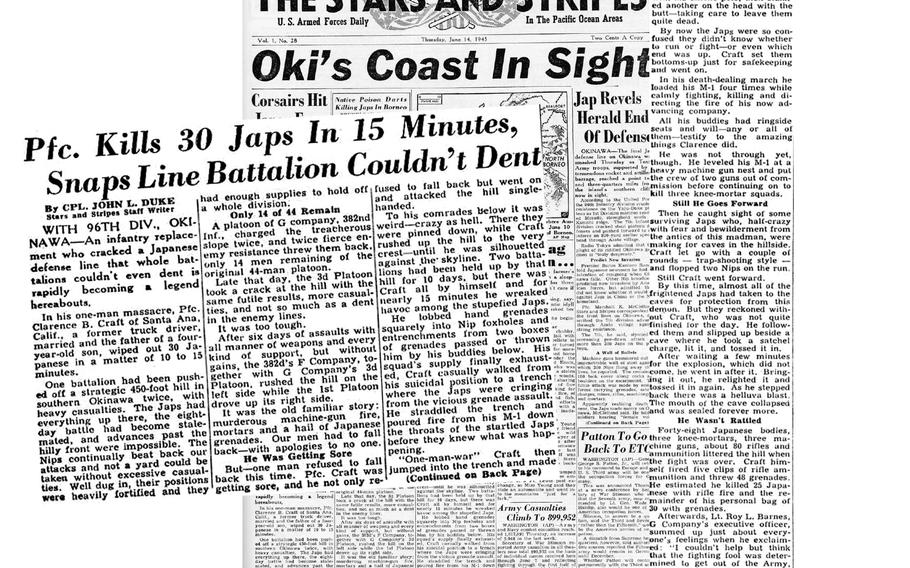 WITH 96TH DIV., OKINAWA – An infantry replacement who cracked a Japanese defense line that whole battalions couldn’t even dent is rapidly becoming a legend hereabouts.

In his one-man massacre, Pfc. Clarence B. Craft of Santa Ana., Calif., a former truck drive, married and the father of a four-year-old son, wiped out 30 Japanese in a matter of 10 to 15 minutes.

One battalion had been pushed off a strategic 450-foot hill in southern Okinawa twice, with heavy casualties. The Japs had everything up there, the eight-day battle had become stalemated, and advances past the hilly front were impossible. The Nips continually beat back our attack and not a yard could be taken without excess casualties. Well dug in, their position were heavily fortified and they had enough supplies to hold off a whole division.

Only 14 of 44 RemainA platoon of G company, 382nd Inf., charged the treacherous slope twice, and twice fierce enemy resistance threw them back, only 14 men remaining of the original 44-man platoon.

Late that day, the 3d Platoon took a crack at the hill with the same futile results, more casualties, and not so much as a dent in the enemy lines.

It was too tough.

After six days of assault with all manner of weapons and every kind of support, but without gains, the 382d’s F company, together with G Company’s 3d Platoon, rushed the hill on the left side while the 1st Platoon drove up its right side.

It was the old familiar story: murderous machine-gun fire, mortars and a hail of Japanese grenades. Our men had to fall back – with apologies to no one.

To his comrades below it was weird – crazy as hell. There they were pinned own, while Craft rushed up the hill to the very crest – until he was silhouetted against the skyline. Two battalions had been held up by that hill for 10 days, but there was Craft all by himself and for nearly 15 minutes he wreaked havoc among the stupefied Japs.

He lobbed hand grenades squarely into Nip foxholes and entrenchments from two boxes of grenades passed or thrown him by his buddies below. His squad’s supply finally exhausted, Craft casually walked from his suicidal position to a trench where the Japs were cringing from the vicious grenade assault. He straddled the trench and poured fire from his M-1 down the throats of the startled Japs before they knew what was happening.

“One-man-war” Craft then jumped into the trench and made his way along it, taking on all comers. He put the blast on one with his smoke pole, then clunked another on the head with the butt – taking care to leave them quite dead.

By now the Japs were so confused they didn’t know whether to run or to fight – or even which end was up. Craft set them bottoms-up just for safekeeping and went on.

In this death-dealing march he loaded his M-1 four times while calmly fighting, killing and directing the fire of his now advancing company.

All his buddies had ringside seats and will – any or all of them – testify to the amazing things Clarence did.

He was not through yet, though. He leveled his M-1 at a heavy machine gun next and put the crew of two guns out of commission before continuing on to kill three knee-mortar squads.

Still He Goes ForwardThen he caught sight of some surviving Japs who, half-crazy with fear and bewilderment from the antics of this madman, were making for caves in the hillside. Craft let go with a couple of rounds – trap-shooting style – and flopped two Nips on the run.

By this time, almost all the frightened Japs had taken to the caves for protection from this demon. But they reckoned without Craft, who was note quite finished for the day. He followed them and slipped up beside a crave where he took a satchel charge, lit it, and tossed it in. After waiting a few minutes for the explosion, which did not come, he went in after it. Bringing it out, he relighted it and tossed it in again. As he stepped back there was a helluva blast. The mouth of the cave collapsed and was sealed forever more.

He Wasn’t RattledForty-eight Japanese bodies, three knee-mortars, three machine guns, about 80 rifles and ammunition littered the hill when the fight was over. Craft himself fired five clips of rifle ammunition and threw 48 grenades. He estimated he killed 25 Japanese with rifle fire and the remainder of his personal bag of 30 with grenades.

Afterward, Lt. Roy L. Barnes, G Company’s executive officer, summed up just about everyone’s feelings when he exclaimed: “I couldn’t help but think that the fighting fool was determined to get out of the Army, either by way of a Congressional Medal of Honor or by dying.”

Craft says calmly: “I wasn’t crazy or rattled. I knew what I was doing all the time.”