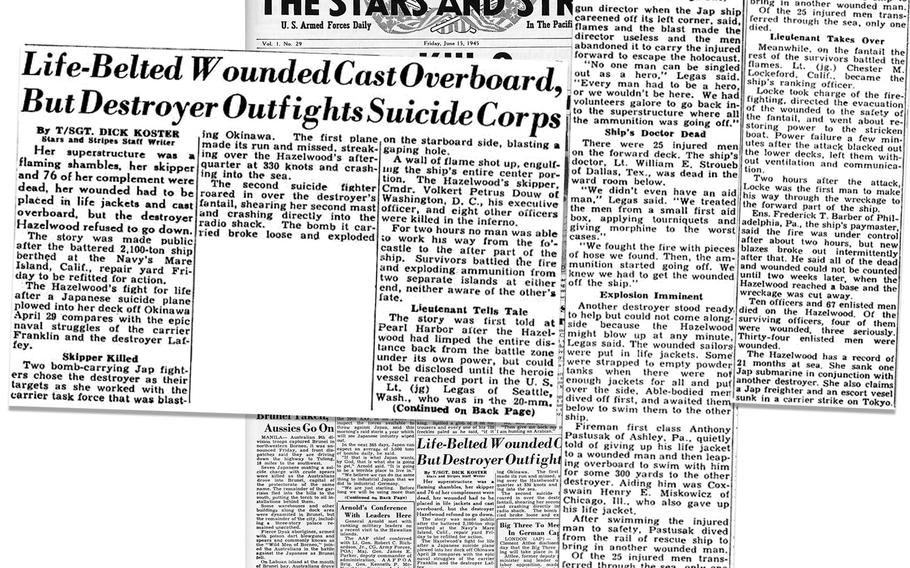 Her superstructure was a flaming shambles, her skipper and 76 of her complement were dead, her wounded had to be placed in life jackets and cast overboard, but the destroyer Hazelwood refused to go down.

The story was made public after the battered 2,100-ton ship berthed at the Navy’s Mare Island, Calif., repair yard Friday to be refitted for action.

The Hazelwood’s fight for life after a Japanese suicide plane plowed into her deck off Okinawa April 29 compares with the epic naval struggles of the carrier Franklin and the destroyer Laffey.

Skipper KilledTwo bomb-carrying Jap fighters chose the destroyer as their targets as she worked with the carrier task force that was blasting Okinawa. The first plane made its run and missed, streaking over the Hazelwood’s afterquarter at 330 knots and crashing into the sea.

The second suicide fighter roared in over the destroyer’s fantail, shearing her second mast and crashing directly into the radio shack. The bomb it carried broke loose and exploded on the starboard side, blasting a gaping hole.

A wall of flame shot up, engulfing the ship’s entire center portion. The Hazelwood’s skipper Cmdr. Volkert Petrus Douw of Washington, D.C., his executive officer, and eight other officers were killed in the inferno.

For two hours no man was able to work his way from the fo’-castle to the after part of the ship. Survivors battled the fire and exploding ammunition from two separate islands at either end, neither aware of the other’s fate.

Lieutenant Tells TaleThe story was first told at Pearl harbor after the Hazelwood had limped the entire distance back from the battle zone under its own power, but could not be disclosed until the heroic vessel reached port in the U.S.

Lt. (jg) Legas of Seattle, Wash., who was in the 20-mm. gun director when the Jap ship careened off its left corner, said flames and the blast made the director useless and the men abandoned it to carry the injured forward to escape the holocaust.

“No one man can be singled out as a hero,” Legas said. “Every man had to be a hero, or we wouldn’t be here. We had volunteers galore to go back into the superstructure where all the ammunition was going off.”

Ship’s Doctor DeadThere were 25 injured men on the forward deck. The ship’s doctor, Lt. William E. Stroucb of Dallas, Tex., was dead in the ward room below.

“We didn’t even have an aid man,” Legas said. “We treated the men from a small first aid box, applying tourniquets and giving morphine to the worst cases.”

“We fought the fire with pieces of hose we found. Then, the ammunition started going off. We knew we had to get the wounded off the ship.”

Explosion ImminentAnother destroyer stood ready to help but could not come alongside because the Hazelwood might blow up at any minute, Legas said. The wounded sailors were put in life jackets. Some were strapped to empty powder tanks when there were not enough jackets for all and put over the side. Able-bodied men dived off first, and waited them below to swim them to the other ship.

Fireman first class Anthony Pastusak of Ashley, Pa., quietly told of giving up his life jacket to a wounded man and then leaping overboard to swim with him for some 300 yard to the other destroyer. Aiding him was Coxswain Henry E. Miskowicz of Chicago, Ill., who also gave up his life jacket.

After swimming the injured man to safety, Pastusak dived from the rail of the rescue ship to bring in another wounded man.

Of the 25 injured men transferred through the sea, only one died.

Locke took charge of the firefighting, directed the evacuation of the wounded to the safety of the fantail, and went about restoring power to the stricken boat. Power failure a few minutes after the attack blacked out the lower decks, left them without ventilation and communications.

Two hours after the attack, Locke was the first man to make his way through the wreckage to the forward part of the ship.

Ens. Frederick T. Barber of Philadelphia, Pa., the ship’s paymaster, said the fire was under control after about two hours, but the new blazes broke out intermittently after that. He said all of the dead and wounded could not be counted until two weeks later, when the Hazelwood reached a base and the wreckage was cut away.

The Hazelwood has a record of 21 months at sea. She sank one Jap submarine in conjunction with another destroyer. She also claims a Jap freighter and an escort vessel sunk in a carrier strike on Tokyo.