Washington in 1969 hosted largest antiwar protest in US history 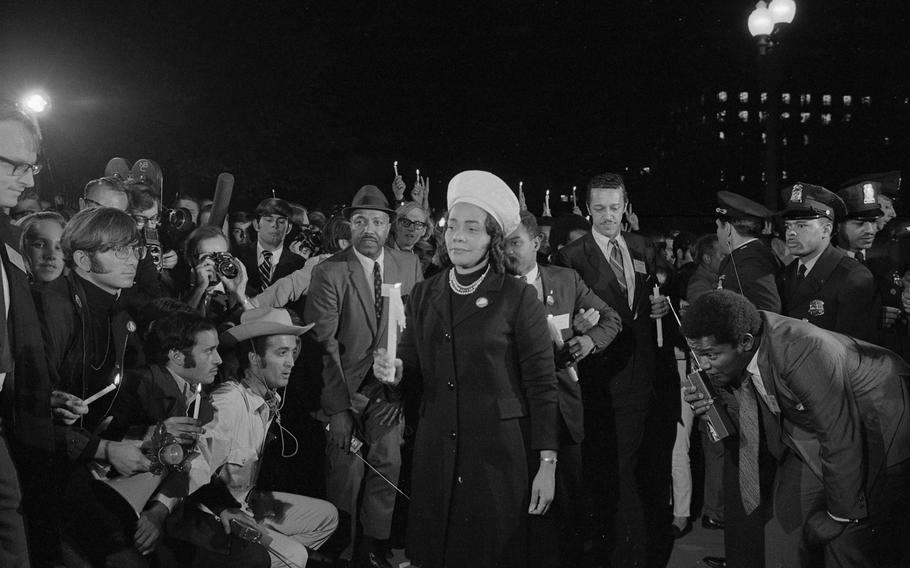 Coretta Scott King holding a candle and leading a march at night to the White House as part of the Moratorium to End the War in Vietnam which took place on October 15, 1969. (U.S. News & World Report)

WASHINGTON — While hundreds of thousands of demonstrators converged on Washington in November 1969 to show their growing disdain for America’s involvement in Vietnam, Sgt. Grant Coates was bunkered in the Commerce Department with his fellow soldiers, peeking out windows to catch glimpses at the activity outside.

Coates was a squad leader with the 6th Armored Cavalry Regiment out of Fort Meade, Md., one of the units assigned to riot duty during the weekend of Nov. 15, 1969, when about 500,000 people gathered in the capitol for what’s believed to be the largest antiwar protest in U.S. history, called the Moratorium March.

The protests in Washington, and around the country, were building as the Vietnam War ground on. Students for a Democratic Society staged the first major anti-war rally in Washington on April 17, 1965, with about 20,000 people attending the orderly event.

Fast-forward to 1969, and the historic November rallies were part of a string of demonstrations that took place around the world, with groups from San Francisco to Boston and London petitioning for peace. Thousands of others involved in the antiwar movement joined affiliated protests in cities and on college campuses across the country, including a march through San Francisco that attracted 30,000.

The weekend of the march, Coates was one of the only service members on riot duty who had served in Vietnam.

Coates volunteered for the Army, having felt an obligation to the country. When he returned to the U.S. from Vietnam in September 1969, he was reassigned to Fort Meade.

Fifty years later, Coates, now 70 and living in upstate New York, recalls that Moratorium March weekend in detail. His squad remained inside the Commerce Department, adjacent to the National Mall, waiting to be called to help local police if the protest got violent.

“We had observers on the tops of the buildings reporting in on what they were seeing,” Coates said. “Those of us not on the roof were stretched out in the hallways, sleeping in our combat boots with our gear next to us so we could be ready to get into formation.”

A security force of 40,000 police and troops guarded Washington that weekend, and almost all of them — like Coates — were hidden from public view, United Press International reported.

Police were expecting a crowd of 100,000 for the demonstration. It was planned by the Vietnam Moratorium Committee, which had held other massive demonstrations against America’s involvement in Vietnam. Afterward, police conservatively estimated 250,000 had joined the protest. Based on that number, newspapers dubbed it the “biggest peace demonstration in the nation’s history.”

Later, the estimate would climb to 500,000. The Washington protest was the focal point of the weekend.

About 1,000 protesters an hour moved from Arlington National Cemetery to the White House and then onto the Capitol “in a march against death,” The Associated Press reported at the time. Many of them carried placards with the names of service members who were killed in action in Vietnam, or the names of Vietnamese villages that had been destroyed.

Demonstrators heard speeches from antiwar politicians and performances by Arlo Guthrie, Pete Seeger and the group Peter, Paul and Mary.

Throughout it all, President Richard Nixon remained in the White House.

“The Nixon administration reaffirmed that its Vietnam policy would not be determined by marchers on the streets and asserted its course continues to have the support of most Americans,” the AP reported.

Coates also remained inside — his squad was never called into action. The demonstration was mostly peaceful except for a small section of the crowd that violently protested near the Justice Department on the evening of Nov. 15.

From the windows of the Commerce Department, Coates intermittently spotted clouds of tear gas. His squad slept in their masks because gas had filtered into the building through the air-conditioning system, he said.

Early Nov. 16, when most of the crowd had dispersed, his squad left the Commerce Department.

“I remember it was a clear day the morning we left,” Coates said. “We could still feel the tear gas. Anytime there was a breeze, the crystals would blow off buildings and streets, burning our eyes.”

Coates was 20 at the time, fresh off a combat tour in Vietnam, where he was part of the 76th Infantry Detach Combat Tracker Team. With a dog in tow, the team was tasked with establishing contact with enemy combatants.

Other service members on riot duty did not have combat experience. Some were part of Special Services, the entertainment branch of the military that included bands and baseball teams.

In their off-time, many wore peace paraphernalia and aligned themselves with the antiwar movement, Coates said. Before rolling into Washington, they had to be trained not to break ranks.

“I remember a lot of them saying, ‘I agree with the demonstrators. I’m not for the war, and I don’t want to go to Vietnam,’ ” Coates said.

“On the ride down, I told my squad, ‘You got to remember what you’re doing and protect yourself. These people don’t care that you like them. They see you as the government.’ ”

Coates witnessed the change in his squad as they traveled past protesters, some of whom shouted at them and threw things at their vehicles.

“They got hit abruptly with counterculture in their face, and they didn’t have much patience after that,” Coates recalled. “After about an hour on the road, these guys were yelling stuff out the window back at them.”

Reflecting on the attitudes at the time, Coates said people hadn’t yet separated individual service members from the government.

“Service members represented the government, and the agitation, the irritation — it was taken out on the service member,” Coates said. “My feeling was, carry your sign. Yell what you want, but don’t yell it at me. I’m not the one making the decisions.”