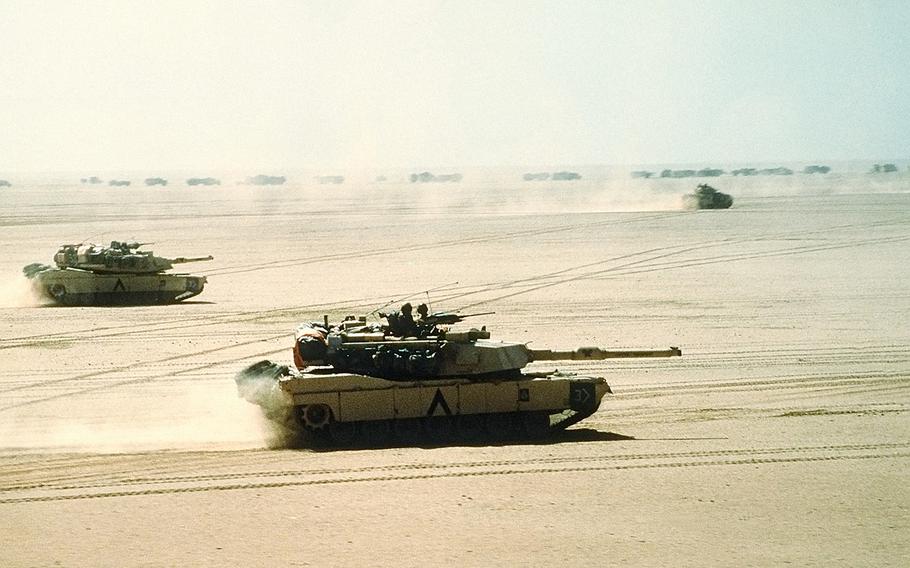 M1A1 Abrams main battle tanks of the 3rd Armored Division move out on a mission during Operation Desert Storm, Feb. 15, 1991. An M2/M3 Bradley can be seen in background. (D. W. HOLMES II/U.S. Navy)

M1A1 Abrams main battle tanks of the 3rd Armored Division move out on a mission during Operation Desert Storm, Feb. 15, 1991. An M2/M3 Bradley can be seen in background. (D. W. HOLMES II/U.S. Navy) 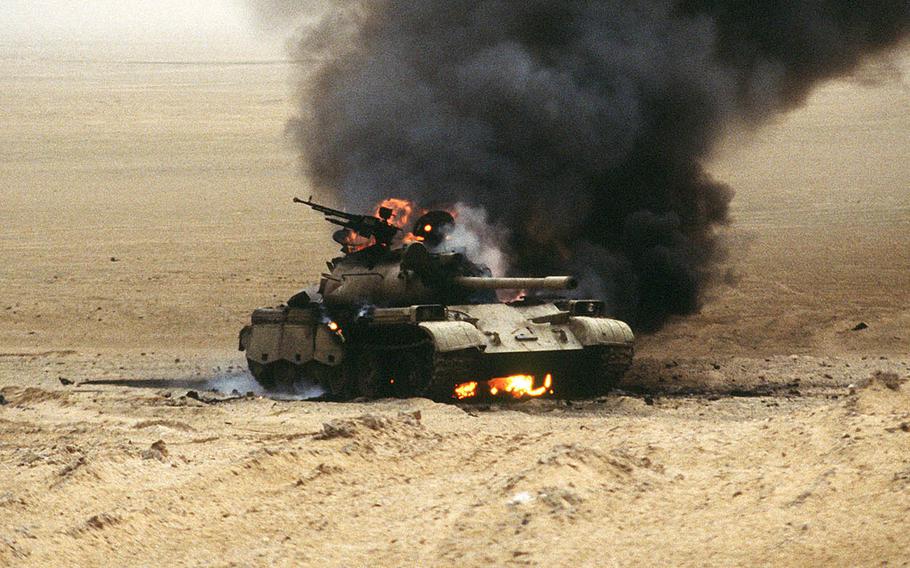 Tankers with U.S. Army’s 2nd Brigade, 1st Armored Division, needed a mere 40 minutes to pulverize an armored brigade of the Iraqi Republican Guard during the Battle of Medina Ridge, a display of technological superiority against a force many expected to be more formidable.

“It was brief, it was intense and it was one-sided,” said Doug Wooley, a retired Army lieutenant colonel who led a platoon in the battle.

And it was one of the final punches of Gen. Norman Schwarzkopf’s “left hook” — a massive flanking attack against Iraqi forces near the Kuwait border. The tank crews of 1st Armored Division had moved at a blistering pace through southern Iraq since crossing the Saudi border three days earlier, meeting little resistance along the way.

After a small skirmish with Iraqi regular forces in the town of Al Busayyah, 2nd Brigade tankers were pushed forward in search of the Republican Guard, the elite branch of Iraq’s military and the praetorian guard of Iraqi President Saddam Hussein.

The Republican Guard was equipped with Soviet-made T-72 and obsolescent Chinese Type 69 tanks. It was experienced in desert tank battles from Iraq’s recent nine-year war with Iran, but its forces were reeling from combat with the Americans when the battle took place on Feb. 27, 1991.

In an effort to block the American drive and allow Iraqi forces to withdraw from Kuwait, the 2nd Brigade of the Guard’s Medina Division had dug in behind a small rise in the landscape, a ridge that would expose enemy tanks to their fire. Though tactically sound, the scheme turned out to be both unlucky and unworkable against an advanced enemy.

Larry Porter, a former platoon sergeant, remembers cresting the ridge and finding more than a dozen Iraqi tanks in a staggered line — and pointing away from his platoon. The Americans opened fire.

“We caught them looking in the wrong direction,” he said.

American forces enjoyed other advantages. They were using infrared imaging to identify targets on a hazy, rainy day. And most of American tankers fired from distances close to 2,500 meters — well outside the range of the T-72.

The Iraqis could neither see nor reach the Abrams tanks lined up against them, said Tom Carhart, a former soldier who wrote about the 1st Armored Division experience in Desert Storm.

The battle quickly turned into a shooting gallery as brigade tanks lined up to fire. Enemy turrets exploded as the armor-piercing rounds fired from the Abrams slammed into their targets. Woolley remembers one turret flying through the air and piercing the ground, like a lollipop.

“It was stunning, just the power of the rounds,” he said.

American AH-64 Apache helicopters and A-10 Warthogs fighter jets quickly joined in the fight, further tipping the scales. The Iraqis were firing back, with no effect.

“You could see they were engaging us, but their rounds were falling short,” said Sean Dorfman, another platoon leader.

Distinguishing friendly forces was the biggest challenge for American forces during the fighting. The only American killed in action was a 20-year-old cavalry scout, Spc. Clarence Cash, whose vehicle was hit by a friendly tank round.

The Iraqis suffered far worse, with only a few fighters fleeing or surrendering. Most died in their vehicles. When American forces moved forward after the battle, they were told to close their hatches as Iraqi ammunition cooked off. More than 100 Iraqi tanks and armored vehicles were destroyed, according to reports at the time.

A cease-fire went into effect the next day across Iraq, and American forces were out of the country weeks later. Their taste of battle had been brief and complete. Retired Army Gen. Montgomery C. Meigs, who commanded 2nd Brigade at the time, said his tankers’ training in Germany, where they drilled speed and accuracy to fight Soviet bloc forces, easily eclipsed the skill of the Iraqis.

“They just weren’t able to play at our level,” he said.