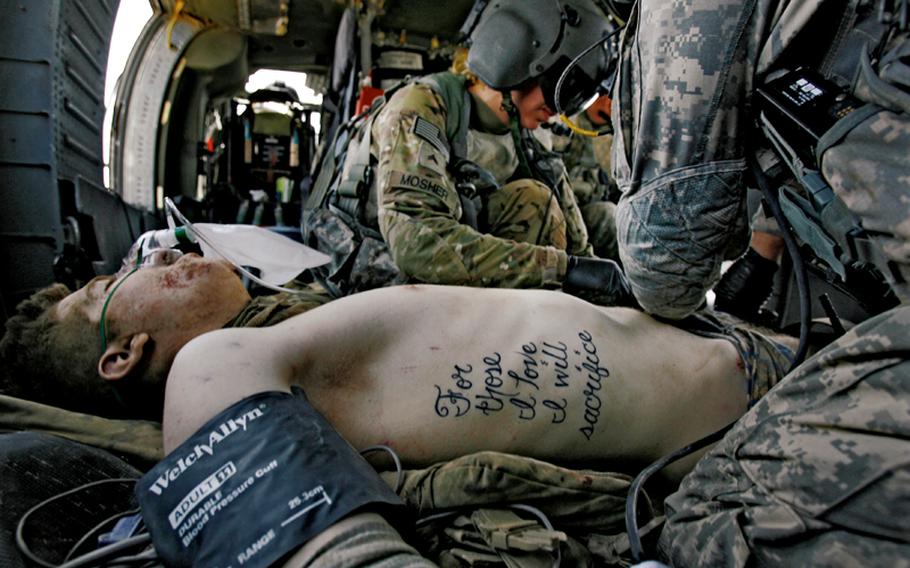 Buy Photo
Pfc. Kyle Hockenberry, of 4th Squadron, 4th Cavalry Regiment, 1st Heavy Brigade Combat Team, 1st Infantry Division, who was injured in an improvised explosive device attack near Haji Ramuddin, is treated by flight medic Cpl. Amanda Mosher while being transported by medevac helicopter to the Role 3 hospital at Kandahar Air Field in Afghanistan on June 15. Throughout Hockenberry's multiple surgeries and skin grafts, doctors have worked around his tattoo and left it intact. (Laura Rauch/Stars and Stripes)

Laura Rauch, a Mideast reporter for Stars and Stripes, has won a 2011 Sigma Delta Chi Award for excellence in journalism for her photograph of a wounded soldier being transported in a medevac helicopter to the Role 3 hospital at Kandahar Air Field in Afghanistan.

Pfc. Kyle Hockenberry, injured in an improvised explosive device attack on June 15, 2011, has a tattoo that reads: “For those I love I will sacrifice.”

The 19-year-old — a member of the 4th Squadron, 4th Cavalry Regiment, 1st Heavy Brigade Combat Team from Fort Riley, Kan. — lost both legs and his left arm in the blast. The photo was the winner in the breaking news category for newspapers with circulation of 100,000 or more. Judges chose from more than 1,700 entries in categories covering print, radio, television and online.

Rauch is a veteran newspaper and wire service correspondent whose assignments have taken her to more than 45 countries, covering everything from the Olympics to the wars in Afghanistan and Iraq. She joined Stars and Stripes in 2011. Below are just some of the photos she took while working for Stars and Stripes.