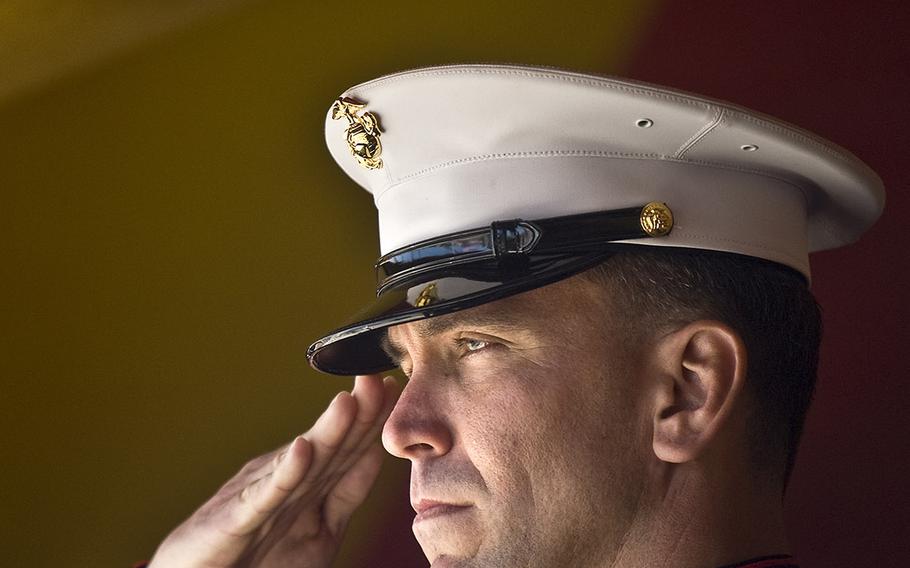 Gunnery Sgt. Brian C. Jacklin salutes before a ceremony award him the Navy Cross at Camp Pendleton. The Navy Cross is the second highest honor for the members of the Marines, Navy and Coast Guard. (Nick Agro/Orange County Register)

Gunnery Sgt. Brian C. Jacklin salutes before a ceremony award him the Navy Cross at Camp Pendleton. The Navy Cross is the second highest honor for the members of the Marines, Navy and Coast Guard. (Nick Agro/Orange County Register) 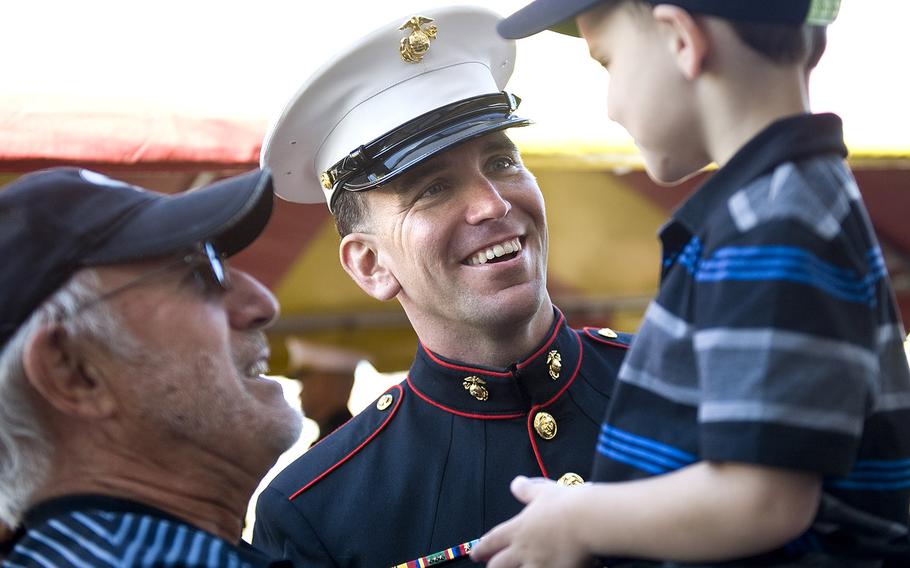 Gunnery Sgt. Brian Jacklin meets with his son, Hunter, 6, and his son's grandfather, Jim Klocke of Placentia, before a ceremony to award Jacklin with the Navy Cross at Camp Pendleton. (Nick Agro/Orange County Register) 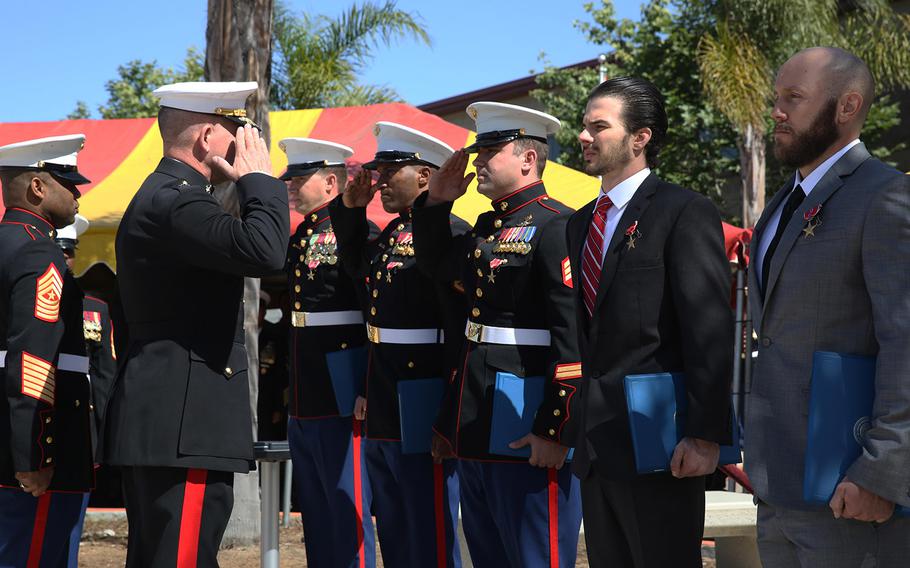 Gunnery Sgt. Brian Jacklin and his teammates were surrounded on all sides, under heavy fire, and two of the Marines were bleeding out. The medevac choppers were five minutes away, and the Marines needed to blow a hole in the wall to leave the relative safety of their compound for an open field.

He looked at his fellow Marines and asked, “Does anybody have a problem with risking it to take these guys out there?”

There wasn’t a second of hesitation.

The fight began the morning of June 14, 2012, while the team from 1st Marine Special Operations Battalion was in the Upper Gereshk Valley in Helmand province, Afghanistan. Suddenly, enemy forces rained heavy fire onto the team, grievously wounding two of the Marines. The men soon realized they were outnumbered seven or eight times over.

Jacklin, who had been second in command before the team leader was struck in the chest with a bullet, took control and began organizing a counterattack while calling for evacuation of the wounded men, according to his award citation. Harris organized close air support and identified a landing zone.

As the team was leaving the compound, Simpson and Hussein climbed a ladder to the roof to help move the wounded Marines then provided lifesaving care. Hussein and Buckminster carried the two injured men on stretchers through the field of fire.

Meanwhile, Hall took charge of an element of Afghan local police and led them to a landing zone through heavy fire, holding a security perimeter for the helicopter.

Jacklin and the others stood their ground, with Jacklin lobbing grenades at the enemy and the team shielding the wounded with their bodies, even as intense fire forced the Marines to wave the helicopter off at first.

The injured Marines were evacuated, and when a team of Navy SEALs came to relieve the Marines Jacklin and Harris volunteered to stay. They continued the fight the entire next day, not stopping until the enemy was defeated.

Jacklin described the team’s actions as “all or nothing, death or glory” in the heaviest fire he had seen in 10 years of combat.

The Marines in Marine Special Operations Command would “rather die than live with the shame that they didn’t offer their last breath in service to the man on their left and their right,” he said. “You really have no choice but to fight and to win the day.”

He said he was honored and overwhelmed to receive the Navy Cross but said he has had no greater honor than to serve with the men on his team.

“Never above you, never below you, always beside you. Semper Fidelis,” he said, in a dedication to his teammates.

“Everything was working against that team,” Osterman said, but they refused to leave anyone behind.

Capt. Derek Herrera was one of those injured Marines. A shot in the opening volley of the attack paralyzed him from the chest down. At the ceremony to honor his teammates, he called them his inspiration.

“Physically, I would not be here today” without them, Herrera said.

When he was injured, he said it was almost peaceful knowing that while he was fighting for his life his fellow Marines were doing everything they could to get him out of there.

“That was the best and worst day of my life,” he said

Herrera refused to give up on walking again. He dedicated himself to rehabilitation and made it back to the 1st Marine Special Operations Battalion as a staff officer by January 2013.

His work was so inspiring that after he gave a tour of the unit’s rehabilitation center to Adm. William McRaven, the then-commander of U.S. Special Operations Command told Herrera that he would have a job in uniform in the command for as long as he wanted it.

Herrera continued to research spinal cord injuries and do what he could to recover, and with the help of the Marine Corps Forces, Special Operations Command’s MARSOC Foundation and other supporters, he bought a robotic exoskeleton that allows him to take slow, deliberate steps. At his medical retirement ceremony in November 2014, he used the exoskeleton to stand and walk to accept a Bronze Star with “V” for “extraordinary guidance, zealous initiative and total dedication to duty” during a June 2011 attack in Afghanistan.

“I’m not one that normally gets emotional, but I’ve got to tell you, your drive, determination and dedication … it’s got me moved today,” Lt. Col. John Lynch, commander of 1st MSOB, said at the ceremony.

Despite all he’s overcome, Herrera deflected praise, instead focusing on the other Marines who saved him.

“The humility is something that drew me to these units,” he said. “I’ve never seen anyone quit, even with the most … seeming insurmountable tasks and experiences and challenges.”

Herrera’s wounds are more visible than the traumatic brain injuries and post-traumatic stress many of his fellow Marines deal with, he said, and he considers himself “completely average.”

Lampert, who graduated from the Naval Academy and the Infantry Officer Course with Herrera, lost his legs in an improvised explosive device blast in 2010 and was serving again in Afghanistan when Herrera was injured.

“He makes you a better human being,” he said.