When ‘normal training isn't going to work, you have to improvise’ AST2 Jonathan Kreske conducts cliff ops training on Kodiak Island, Alaska. Air Station Kodiak aircrews often train for these rescues to stay proficient in the event they are needed to rescue someone from a cliff side. (Tracey Mertens/U.S. Coast Guard)

AST2 Jonathan Kreske conducts cliff ops training on Kodiak Island, Alaska. Air Station Kodiak aircrews often train for these rescues to stay proficient in the event they are needed to rescue someone from a cliff side. (Tracey Mertens/U.S. Coast Guard) 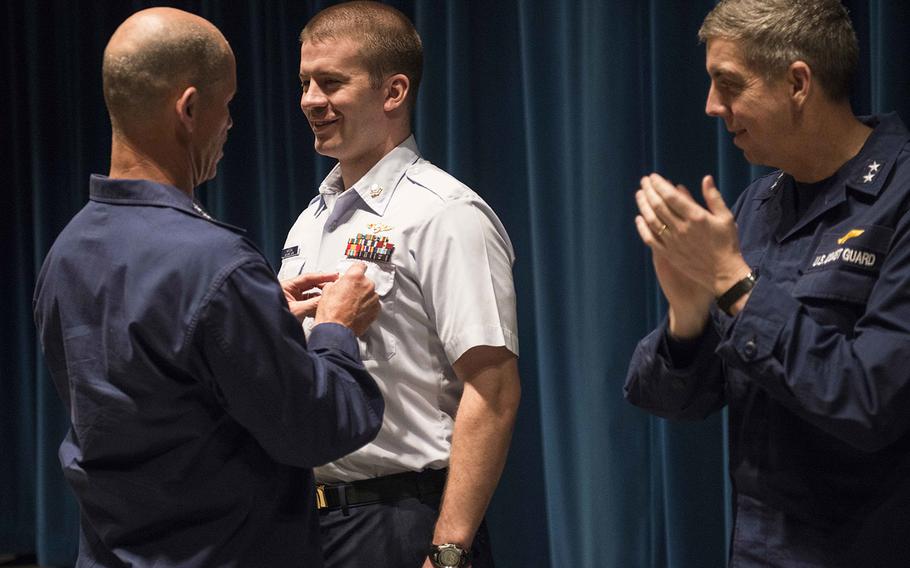 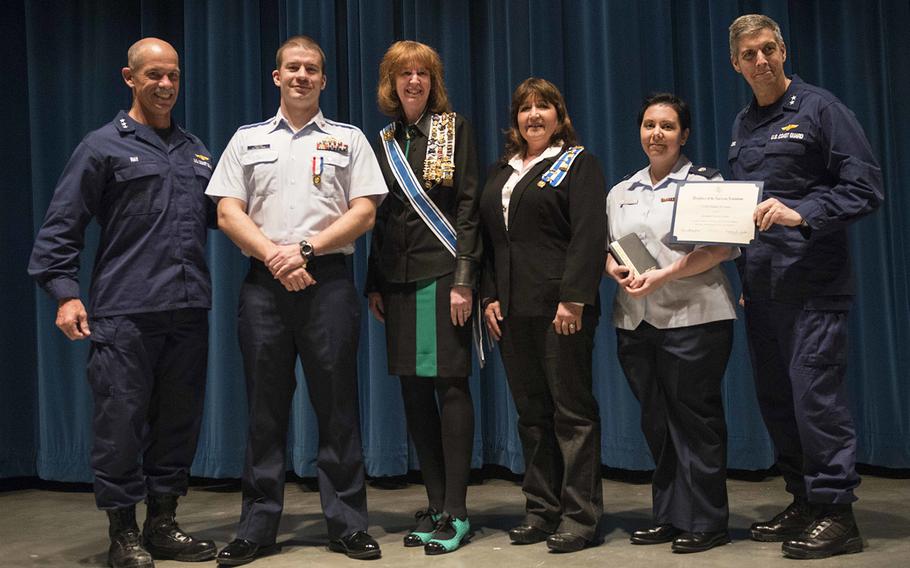 The alarm sounds and the Coast Guard takes off, even when its rescue teams aren’t sure what lies ahead.

The information is often incomplete and sometimes wrong, especially when reported by a bystander.

Petty Officer 2nd Class Jonathan Kreske and three other crewmembers knew only that one man suffered a leg injury and another man might have been hurt when their MH-60T Jayhawk helicopter took off from San Diego around noon Jan. 18, 2013.

Kreske, a rescue swimmer and aviation survival technician, spent the 45-minute ride thinking about all the possible problems a leg injury could pose.

On a clear, calm day, Kreske descended from the sky with a litter and boarded the 900-foot tanker MV Energy Conqueror, about 140 miles off Point Loma, Calif.

The crew spoke mostly Russian and communicated with hand signals. They led Kreske to a man lying down with his legs covered in frozen vegetables.

The crewman’s legs below the ankles had been almost severed, most likely after a cable had snapped. The man had a tourniquet on one leg and boat rope on the other.

“I know he’s in serious trouble and he needs to get out of there,” said Kreske, 31, who recounted his experiences by phone from his current duty station in Kodiak, Alaska.

As Kreske prepared the victim for medical evacuation, the crewmembers kept pointing him to another room.

Kreske followed them and found a higher priority patient.

Blood oozed from the second patient’s lacerated head, while his body seized in irregular movements.

Kreske now had two patients with severe injuries and only one litter.

He gathered the patient with the head wound and loaded him into the litter.

While pilots Lt. Amanda Sardone and Lt. Joseph Plunkett kept the helicopter hovering, Petty Officer 2nd Class Dan McDevitt pulled the patient and backboard out of the litter and onto the helicopter.

McDevitt sent the litter back down to Kreske, who found himself in a dilemma with the remaining patient.

Usually, a patient gets hoisted to a helicopter on his or her back; it’s generally more stable and keeps the patient from panicking while rising as much as 200 feet above the deck.

“I hadn’t seen it done before, but I thought it through and determined it to be safe,” Kreske said. “When you determine that the normal training isn’t going to work, you have to improvise.”

Kreske “did an awesome job of getting the guy packaged up and ready for transport,” said McDevitt, who is stationed in San Diego. “He’s very good at this job, and I had full faith and confidence in him.”

In many cases, Coast Guard crews don’t find out what happens to the people they rescue. However, Kreske got both patients ashore alive — even though the respiration of the man with the head wound began declining on the helicopter. Kreske inserted an oropharyngeal tube to keep the man’s airway open and provided oxygen before handing him off to medical professionals in San Diego.

The story ended there, until a representative for the Daughters of the American Revolution wanted to know more about Coast Guard Station Kodiak’s activities.

A public affairs spokeswoman told the representative about Kreske’s rescue and his other activities. Plunkett and Lt. Bill Burwell, also a pilot, wrote nomination letters on Kreske’s behalf for the DAR Medal of Honor — the top national award given out by the 177,000-member volunteer organization.

In February, Kreske knew he was getting recognized at an all-hands meeting, but didn’t know why until he walked in the room. Waiting for him on stage were Vice Adm. Charles Ray, the Coast Guard’s Pacific area commander, and Rear Adm. Daniel Abel, the district commander.

Kreske received the award, also earned by an astronaut, a U.S. ambassador and a World War II-era Tuskegee airman, among other notable figures.

For Kreske, the personal recognition is only as important as the recognition it lends his crewmembers and the Coast Guard — a smaller, less heralded service than others, but one that takes on a wide variety of daily missions.

Kreske’s greatest reward is in doing what he has always wanted to do, he said. Growing up in Highland, Calif., he worked as a lifeguard and swam competitively. As the son of a firefighter and an emergency management worker, Kreske said he was brought up to be a first responder.

“I plan on staying in the Coast Guard as long as they let me,” Kreske said.