‘The cost was too high’ 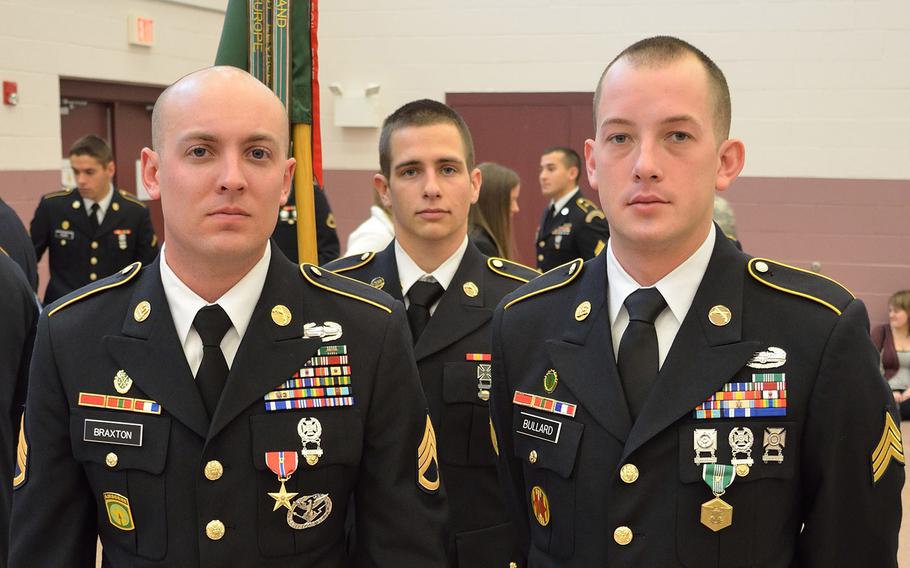 When a man detonated a suicide vest at the morning bazaar in Khost, Afghanistan, more than two years ago, Staff Sgt. Andrew Braxton and Sgt. Benjamin Bullard were unscathed. Their fellow North Carolina National Guard soldiers were not as lucky.

Three members of Braxton’s and Bullard’s unit, the 514th Military Police Company, lay dead in the street. Three others had severe injuries.

Heading up the front of an eight-man foot patrol, working alongside the Afghan Uniform Police, Braxton and Bullard were spared by sheer luck of their positioning.

Bullard, who was 25 meters from the blast, was standing on the other side of an armored vehicle. Braxton was next to him.

“We had chunks of flesh landing around us,” Bullard recalled.

It was later determined that among the deadly explosives in the vest were at least one F1 hand grenade and ball bearings.

Braxton and Bullard ran toward the carnage. Braxton was later awarded the Bronze Star, Bullard the Army Commendation Medal; both had the “V” device for valor.

The morning of Oct. 1, 2012, started out routine, another day in a deployment that had been relatively quiet. The 514th had been in Afghanistan since mid-August for what was to be a nine-month deployment.

“We hadn’t had any contact at all, as far as combat goes,” Bullard said.

With the U.S. military beginning to transition security responsibility to Afghan forces, the 514th was relegated to a backup role in its work with the Afghan Uniform Police.

The unit that morning had teamed up with the local police for a “presence patrol” through Khost’s morning bazaar, “showing the local populace that we were there and we were working with the police,” Bullard said. The police intended to search shops for bomb-making materials.

The patrol stopped at a building. The Afghan police chief wanted to talk to the shop’s owner.

“That’s when somebody ran out and blew himself up,” Braxton said. The scene was “total chaos.”

“It was only myself and Sgt. Bullard still standing, from the Americans,” Braxton said. Several Afghan police officers were killed as were about a dozen civilians; the civilian death toll would later climb. “I ran over to Bullard. I asked him if he was alright,” Braxton recalled. Then they ran into the kill zone.

They first found Staff Sgt. James Pierce, who was seriously injured. He credits Bullard, Braxton and Adam Fuller, an Army combat medic, with saving his life.

Pierce remembers the blast, but not feeling pain immediately.

Pierce remembers Bullard coming to check on him and moving him to a casualty collection point. Bullard put tourniquets on Pierce’s legs and arm and ran to get the medic.

Braxton, the squadron leader, moved quickly to assess the situation, secure the scene and aid the injured soldiers.

“I went to go check on three of my soldiers who were lying side by side,” he said. Killed instantly were Sgts. Thomas J. Butler IV, 25; Jeremy Hardison, 23; and Donna Johnson, 29.

Braxton went to check on Pierce.

“He wasn’t moving unless Bullard was smacking him around, trying to keep him awake, putting pressure on a wound,” Braxton recalled. He jumped in the military truck parked first in line and backed it up with the door open “so we could get the medic out and get Bullard and Pierce in that truck to be worked on.”

Braxton then ran to the other three vehicles, instructing the soldiers inside to “be prepared to help because I’m going to need help” moving casualties.

He retrieved the weapons of the fallen soldiers, had a 360-degree security perimeter set up and helped prepare the vehicles for casualty evacuation, according to his award citation and an interview with Stars and Stripes.

“It’s bad when this becomes normal for me,” he said. “My first deployment was straight hell; we got into all kinds of fights over there.”

Bullard, meanwhile, focused his efforts on assisting Pierce and another injured soldier.

The third injured soldier in the unit took shrapnel to the shoulder, Bullard said. He crawled into a truck and received first-aid from gunner Spec. Christopher Scott and driver Sgt. Jericho Adams.

Spc. Alex Kirchoff, a driver, called for a “quick-reaction force” to escort the group by vehicle convoy back to Matun Hill, the soldiers’ remote outpost about 3 miles from Khost City, and for helicopters to airlift the wounded from Matun Hill to a hospital. Everyone arrived back at Matun Hill less than 30 minutes after the explosion. The three wounded U.S. soldiers survived.

Braxton’s “exceptional leadership and coordination” resulted in the unit being able to depart the scene in about 20 minutes with all personnel, casualties and equipment, Braxton’s Bronze Star citation reads. His actions that day “saved the lives of three seriously injured” soldiers and “ensured the safety of his remaining squad members.”

Bullard’s actions were “unquestionably integral in saving the lives of two of the three casualties,” according to his Army Commendation Medal citation.

The recognition evokes conflicted feelings for Braxton, a community college student in Virginia, and Bullard, an eighth-grade U.S. history teacher. Both are still in the National Guard.

“You’re like, ‘Thanks for the honor presenting me with this,’ but at the same time, it reminds you, this isn’t something to celebrate,” Braxton, 27, said. “The cost was too high.”

Bullard, 26, of Rockingham, N.C., said he’s grateful for the award. “But at the same time,” he said, “it was a very, very, very heavy price by three really, really great soldiers.”