‘That was the point where everything came together’ 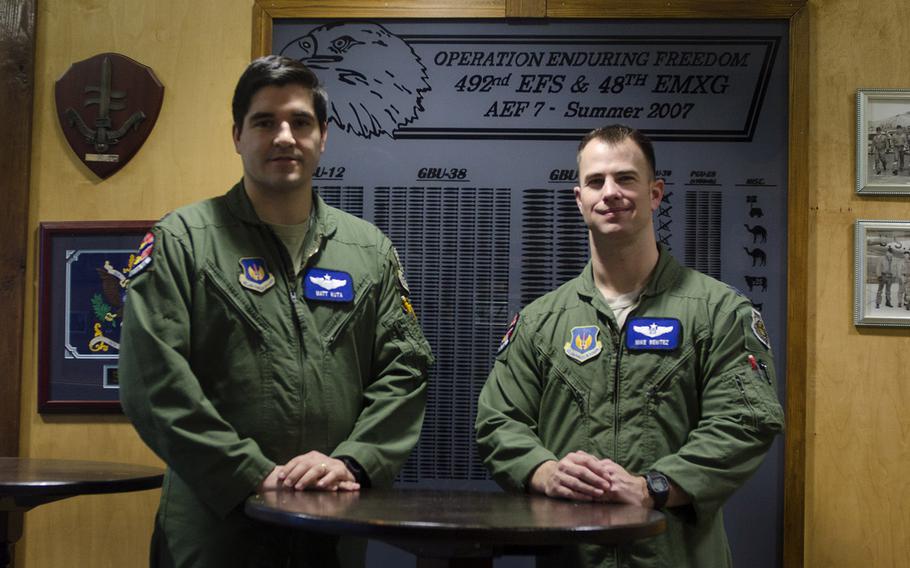 The wounded U.S. servicemember was not far from Kandahar in Afghanistan. Three others were with him, but they could not get the injured man to safety because of an insurgent ambush. Nearby U.S. Army soldiers could not engage the enemy, and a close-air support coordinator on the ground was panicked and inexperienced.

This is what Air Force Capt. Matt Kuta and Capt. Mike Benitez were up against May 21, 2014, when they responded with their F-15E Strike Eagle. Each would receive the Distinguished Flying Cross, not for courage under fire or the other virtues usually associated with war zones, but for patience.

Kuta and Benitez, with the 492nd Fighter Squadron, were on a mission when a call came to help out the embattled Army unit. The soldiers were investigating a cave system suspected of housing an improvised explosive device facility.

Explosive ordnance disposal servicemembers went to check for traps, only to be ambushed by 15 insurgents. One was shot through the leg and the team was cut off from support and lost communications.

The soldiers supporting the EOD squad could not effectively return fire. The cave system was reached through a crevice that split a cliff wall. The crevice was very narrow and it sheltered the insurgents from most of the soldiers outside, Benitez and Kuta said. The insurgents used that to pin down the EOD squad and a group of soldiers on a hill outside the crevice.

Kuta and Benitez’s arrival did not immediately help, because no one could tell them the location of the stranded EOD team or the enemy. That should have been relatively easy since a U.S. Air Force joint tactical air controller, commonly called JTAC, was with the Army unit. JTACs are specialists responsible for coordinating airstrikes during combat. But the JTAC was on the hill receiving enemy fire and, as Benitez described him, was “a very young airman.”

“The JTAC — again, his first time in a firefight, first time outside the wire — he becomes disoriented and starts giving us wrong information about where the friendlies are, where the enemy is,” Benitez said.

While trying to help the JTAC, Benitez said, their jet’s targeting pod, a video system that allows them to get a magnified view of the ground, malfunctioned. The pilots had to rely on visual markers, and the people on the ground tried to use smoke grenades, but Benitez said there was confusion about what the colors meant. Also, the JTAC gave them misleading visual cues, which Benitez described as telling them to look north instead of east, 200 yards instead of 1,500.

Finding the enemies hinged on identifying “the gray rock,” Benitez said. The problem with locating the insurgents was due in part to the military’s terminology changing at the time of the firefight.

Eventually, the pilots and the JTAC were able to coordinate around a gray rock formation near the base of the crevice and near the enemy position.

After some troubleshooting, the targeting pod began to work again, just in time to catch sight of the stranded EOD team darting from one boulder to another. On their camera, the pilots could see gunfire striking near them, Benitez said.

“And that was the point where everything came together,” he said. “We found where all the friendlies were.”

Once the pilots could identify enemies and friendlies, they could begin to attack. After clearing the airspace near the target, they moved to drop a bomb on the enemy’s position.

The bomb armed but did not release from the jet, Benitez said.

They turned and tried again. This time the bomb armed and released and the explosion silenced the enemy — for a moment, he said.

Kuta and Benitez were running low on ammunition since planes in that area were traveling light to save fuel. They switched to a laser-guided bomb, which Benitez said they usually save for moving targets. Kuta dropped the bomb and said he had “a little funny feeling in my stomach, like I’m hoping that everything is going to work out.”

This time the explosion was enough. The bomb stopped the insurgents and detonated the explosive materials being used to make IEDs. That allowed the injured man to be transported to a hospital; he made a full recovery.

“I’ve seen a lot of bad things happen over the years based on just the communication breakdown, and people lose situational awareness,” Benitez said. “So that could’ve easily gone a completely different direction. That’s the thing that really makes me happy is the fact that it didn’t end the way that it probably easily could have.”